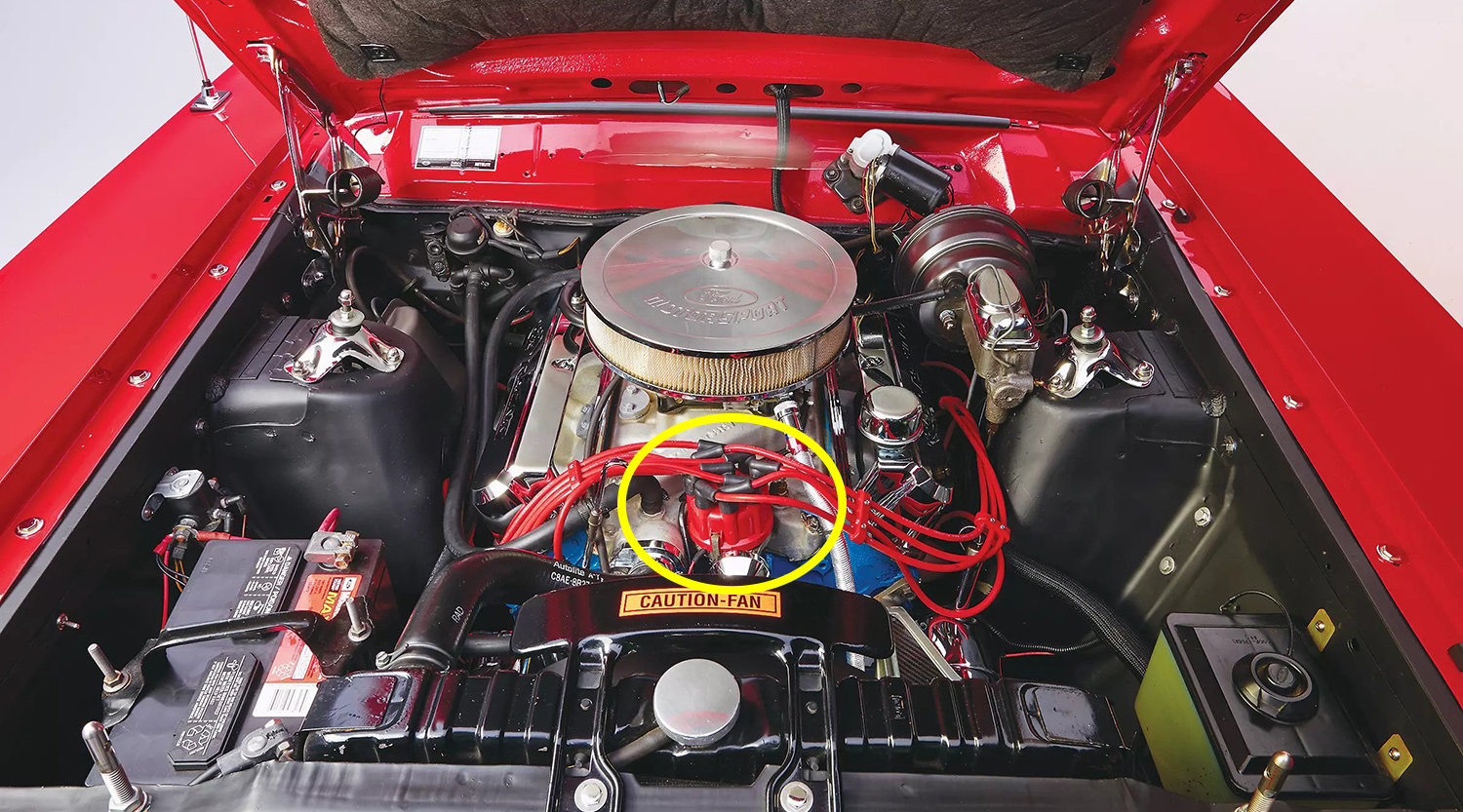 The 351 was the first modern small block V8, an upgrade to the 289/302 engines. The 351 was introduced to accommodate the new weight and size of intermediate cars such as the Torino, Comet and Fairland.

The 351 was a great success for Ford and was used in several of its cars. The 351 was carburetted with a four-barrel carburettor until 1988.

In 1988 the 351 was fuel injected, and the firing order remained the same. The 351 firing order was the most unique of its time because it took care of that weird noise that came from the usual firing order of Ford’s V8 engines.

Let’s dive deep into the 351 and its firing order to see how the engine is unique and why the 351 firing order makes it so unique. 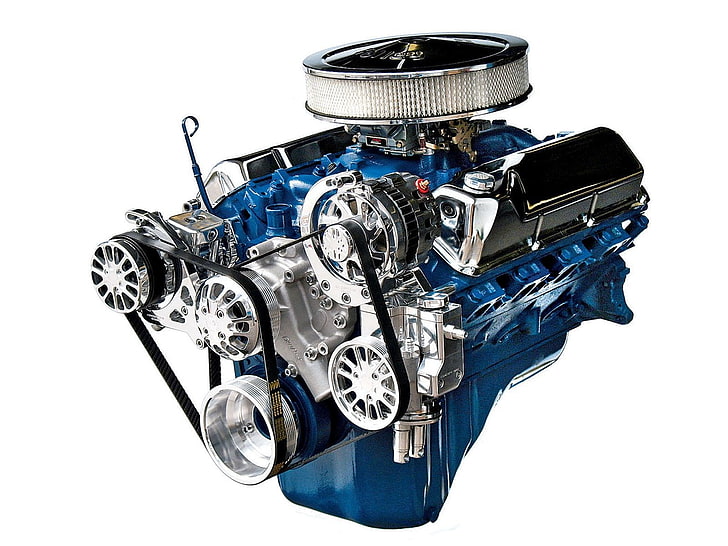 It was cast out of iron which gave it great strength and rigidity. It had a 90-degree v-twin and valve train with an overhead configuration. It had a taller block than the 302, and the 351 was the most common engine from Ford.

The 351 has the highest production number, which means it was used across various cars and has the largest aftermarket support even as of today. It is also the most common engine to be found in junkyard scavenging.

The 351 was produced and used by Ford between 1969-1996. It was taken over by the Ford Modular engines, which used the overhead camshaft configuration instead of the overhead valve train.

The 351C firing order was the same as the 351W. The modifications to the 351 were usually made to the 351C because the 351C was closer to the headquarters and easier to get their hands on.

The officially modified version of 351 was the 351M made in the Michigan factory and was the choice of engine for Ford sports cars. 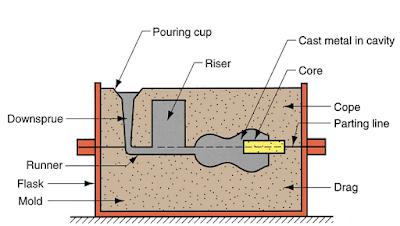 The 351 was iron cast using a sand model and pneumatic or vacuum pressure. There were some problems with mould core shifting, so some adjustments and improvements were made to the casting using better mouldings.

The 351 was cast iron, but after 1971 it had more steel composition making it heavier.

The 351 was initially designed to accommodate the increased size and weight of the pony cars in the Ford lineup.

It was a small block engine, which meant it could be placed in small engine bays, but since it had a tall block, it had to be placed a little lower.

The 351 had higher flow numbers than the 302 and the 400. Due to its simple design, bigger carburettors, bigger valves and cams, and more power were very easy to make with just a few modifications.

It could be made into a two-barrel carburettor, and the compression ratio was easily changed from 11:1 to 8.8:1 when the emissions standard were made strict.

It was the choice for modifications due to its simplicity. With just a few changes, the engine could easily produce twice the amount of stock horsepower.

It had sturdy valve springs, a crankshaft and a high-flow intake manifold making it easier to modify without making any changes to the block and head.

What Makes The 351 So Special?

The 351 had a cast iron block and head. It had dedicated water jacket ports which made it thermally reliable. It had bigger oil and water pumps and a steel crankshaft.

The 351 had bigger intake and exhaust ports with larger valves due to the higher deck. The carburettor has 2 options, a 2-barrel and a 4-barrel.

The carburettor version is the easiest to modify to make power due to its simplicity. The fuel flow rate can be increased easily to make more power.

The valve springs and the valves are all made of steel. The crankshaft and the connecting rods are forged aluminium, providing better heat dissipation and strength to the piston itself.

With all these features, the engine can be pushed to make 500-600 horsepower without changing any internals.

The engine was so versatile and practical that it was even used in several marine applications. It was put in speedboats and even yachts.

Even though the stock version made between 250-300 horsepower, it was to comply with the emission standards.

The aftermarket support of 351 is what makes it such a huge attraction for everyone. Even though some parts can be expensive, they are easier to find.

In the case of an engine rebuild, you can easily find the complete head, valves, camshaft, and a complete block. You can even find complete engines! It has the same cylinder head as the 302 and has several interchangeable parts from the 400 and the 335.

This versatility ensures the availability of parts throughout continents. So many cars had the 351 that it could be easily swapped in or out of any vehicle.

It was the engine which was used in almost every pony car and muscle car and brought the muscle cars the fame and nostalgia they have today. 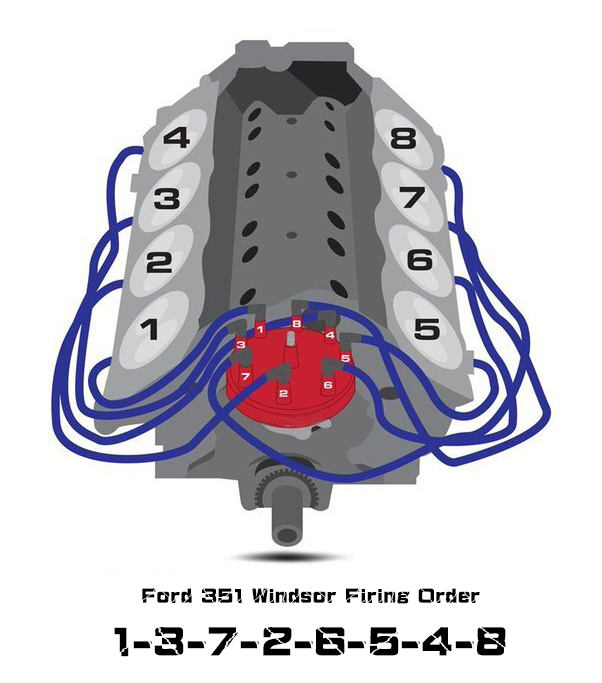 Firing order is the order in which each piston undergoes the combustion stroke. The firing order is determined by the plane of the crankshaft and the timing of the cam lobes or the push rods.

The firing order of the 351 was very unique and the most different compared to other small block V8s from Ford.

What Was So Unique About It?

The standard firing order of Ford V8s was usually 1-5-4-2-6-3-7-8. The standard order created a very strong noise which was a lot to deal with for the owners. It also puts an excess load on the main bearing from the consecutive pistons firing.

The unique firing order of the 351 eased the load on the main bearing and moved the load to the rear, which was the more rigid part of the engine.

The firing order was carried out using a special counter-clockwise spinning distributor. The distributor was made special to accommodate the larger oil pump and oil pump shaft. 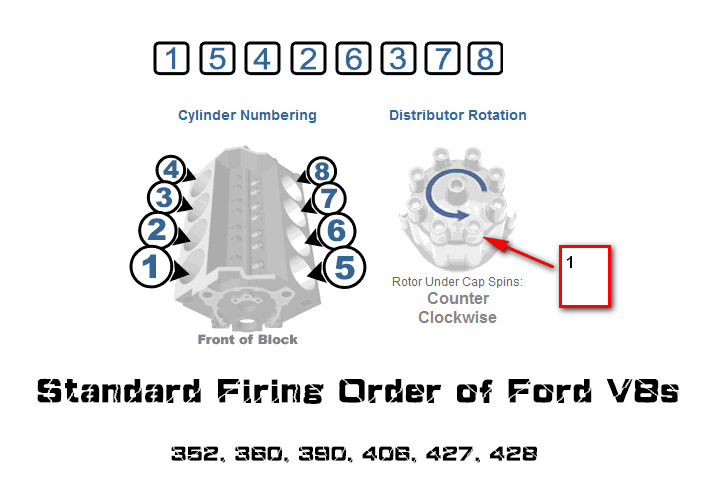 The 351 has several competitors. There are some competitors in the same family and others in other companies, most notably Chevrolet.

The 351 has competitors due to its size and versatility. The 351 was used in so many pony cars made by ford, which means pony cars and muscle cars of its competitor companies were always a competition to the 351.

The similarities end there. The power figures are different, the displacement is different, even the torque figures.

Read More:  Why Do My Spark Plugs Keep Burning Out? [Here’s Why]

The 302 was used in the Ford’s Shelby GTs as the 5.0. Ford enthusiasts have always debated between a Shelby and a Mustang, and the engine has been a really big aspect of the debate.

Here are some side-by-side comparisons between the two engines and the specifications.

Both engines have interchangeable parts, such as

Even the camshaft is interchangeable but you had to adjust the cam timing for the 351s firing order. In terms of fuel economy, they are also very similar.

The better availability of parts also means that parts of 302 are cheaper than those of 351.

The 351 also got a fueling system upgrade with fuel injection, whereas the 302 remained carburetted. 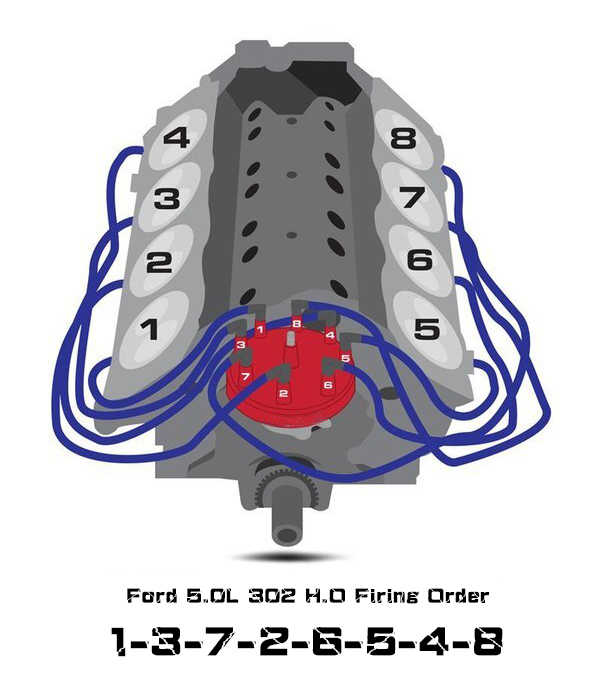 The chevy 350 was a direct competitor of the Ford 351. They both have similar displacement numbers and are very similar to each other in many ways.

Here is the comparison of the highest stock power version of the Ford 351 and Chevy 350.

These engines were similar in terms of parts, but each had some unique tweaking to better fit its application. 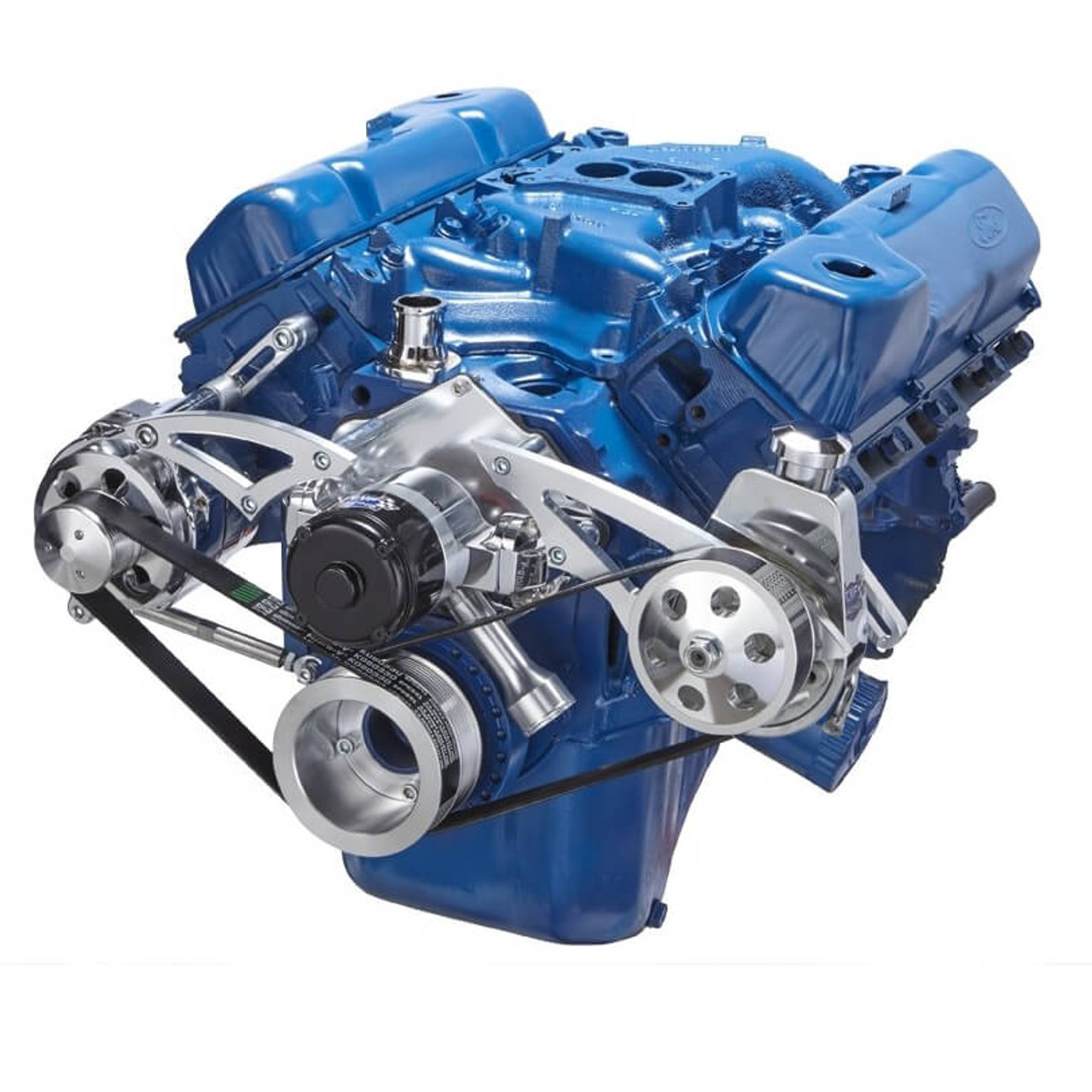 The 351C was the first engine in the 351 series. It had larger ports and canted valves. The valves were tilted 9 degrees towards the intake manifold and 4 degrees to the side.

351C made between 177hp-330hp depending on the year and carburettor configuration. 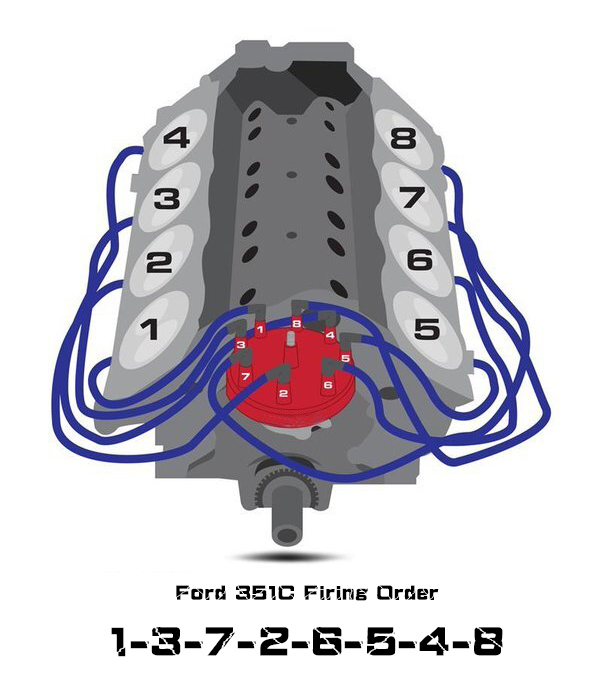 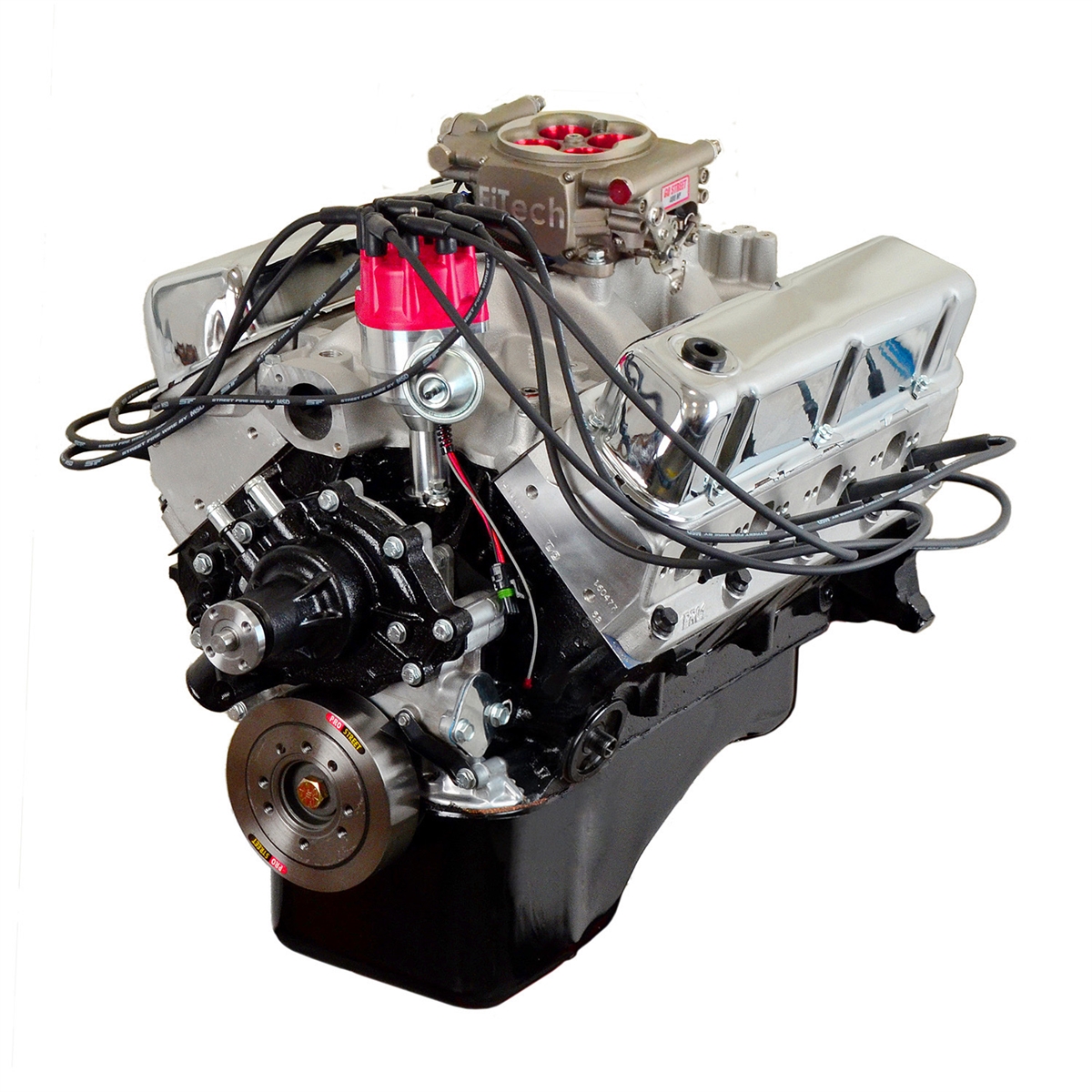 As the name implies, the 351W was produced in the Windsor, Ontario plant in Canada and was in production from 1971-1990. The 351W replaced the 351C to meet the strict emissions standard.

The best way to distinguish the 351W and 351C is that the in the 351C, the water pump housing has been cast into the block, whereas the 351W is flat in the front.

The 351W was used in all the pony cars, muscle cars, trucks with the 351C and many more from the Ford main lineup. 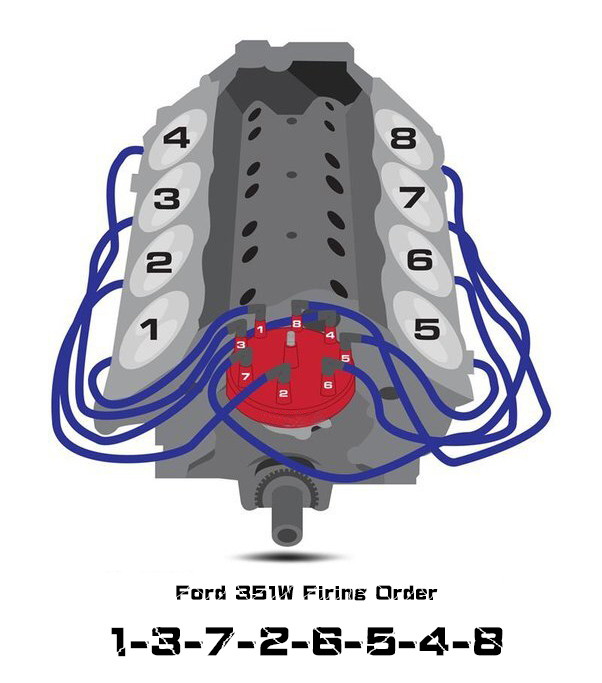 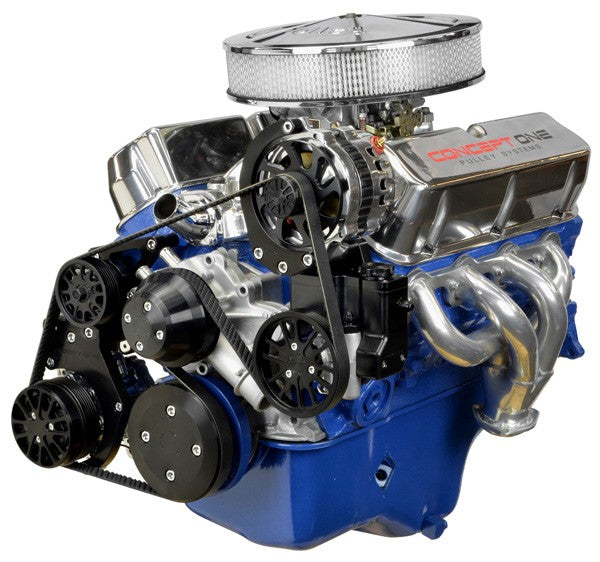 Even though Ford never specified the true meaning of the “M” in the engine name, it was thought to be Modified or Michigan.

It was considered Modified because the 351M was a modified version of the 351C with parts shared with the 400. Some people thought the “M” to be Michigan because it was made in the Michigan factory.

Taller compression height pistons were used to compensate for the shorter stroke pistons in the 351C.

Besides the crankshaft and the pistons, the 351C and 351M share the same components.

The 351 Boss and the 351 Cobra Jet were just derivations of the 351M with few adjustments depending on the car it was gonna be put in. The 351M was made of around 330hp. 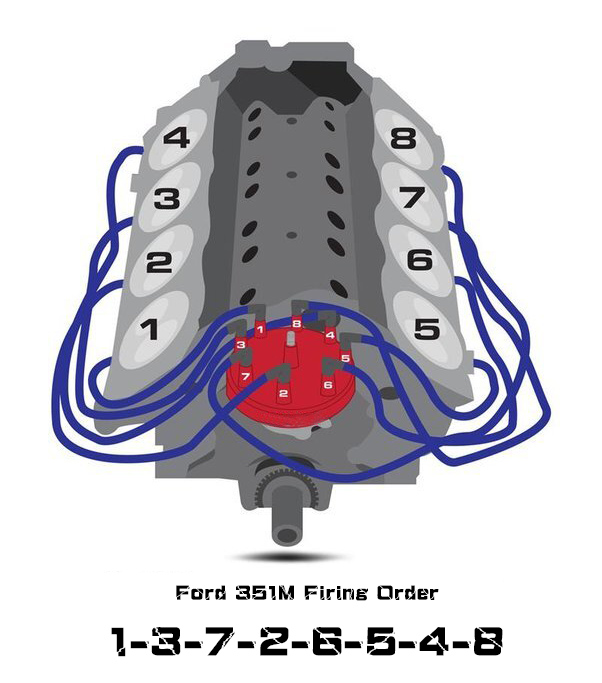 The 351 was a very successful engine made by ford. It was considered over its competitors due to easily interchangeable parts, excellent aftermarket support and easy modifications that bump the power to two times more than the stock power figures.

The 351 was so successful, versatile and easy to maintain that it was even used in marine applications. It was used in boats. That meant that there were tons of 351s lying around in junkyards everywhere.

The 351 lasted till 1990 in production, but it is still sought after today by enthusiasts for restoration and built projects. The 351 shared several parts with the 302 and the 400, which meant parts were easier to come by.

Even if you blew a block or even the head, you could go out and buy new ones. It was an excellent competitor to the chevy 350 and other small-block V8s made by Ford.

It was a saviour for Ford in the fuel crisis and could be modified to make more power for people who didn’t care about fuel economy.

The firing order of the 351 gave it a unique sound and feel and brought balance to the engine, which several Ford small block V8s didn’t have.