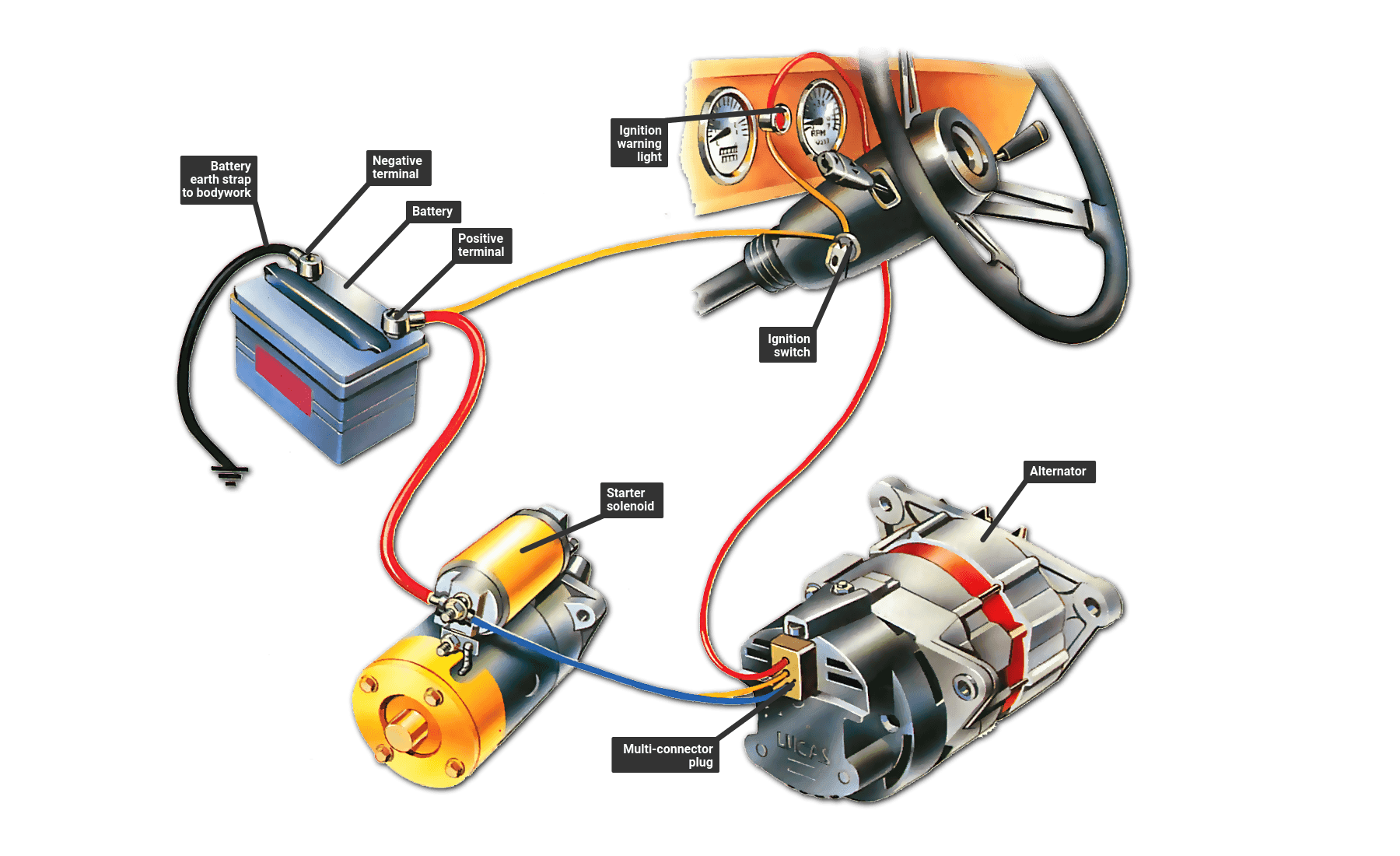 On a basic level, an alternator is a generator that converts the engine’s mechanical energy to electrical energy in the form of alternating current.

The car alternator has a stationary armature with a rotating magnet connected to a pulley. The pulley rotates the magnet inducing the current, and the pulley is driven by the engine using a serpentine belt or a chain.

We will discuss the different parts of an alternator and how to identify them. We will also discuss different configurations in which the alternator is made.

There are 2-wire, 3-wire, and 4-wire alternators. Each car company uses a specific configuration, depending on the application. Companies like Ford and Chevy usually use a 3-wire or a 4-wire design, whereas companies like Nissan, Toyota, and G.M. use 2,3,4-wire diagrams.

Read further to find out why that is, how it impacts the car, and what makes it different from the other configuration.

How Does An Alternator work? 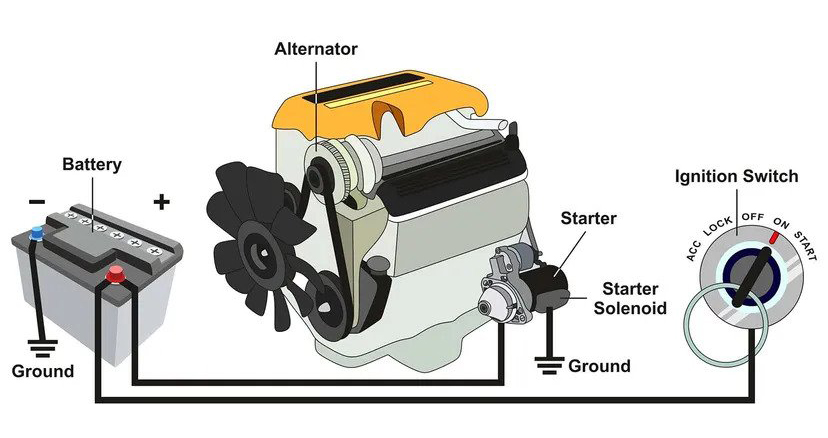 Here are some symbols you may find on your alternator, and this is what they stand for:

Parts Of An Alternator And Their Functions

The alternator has several parts, but here are the essential parts you need to know about that will help you understand the alternator better. 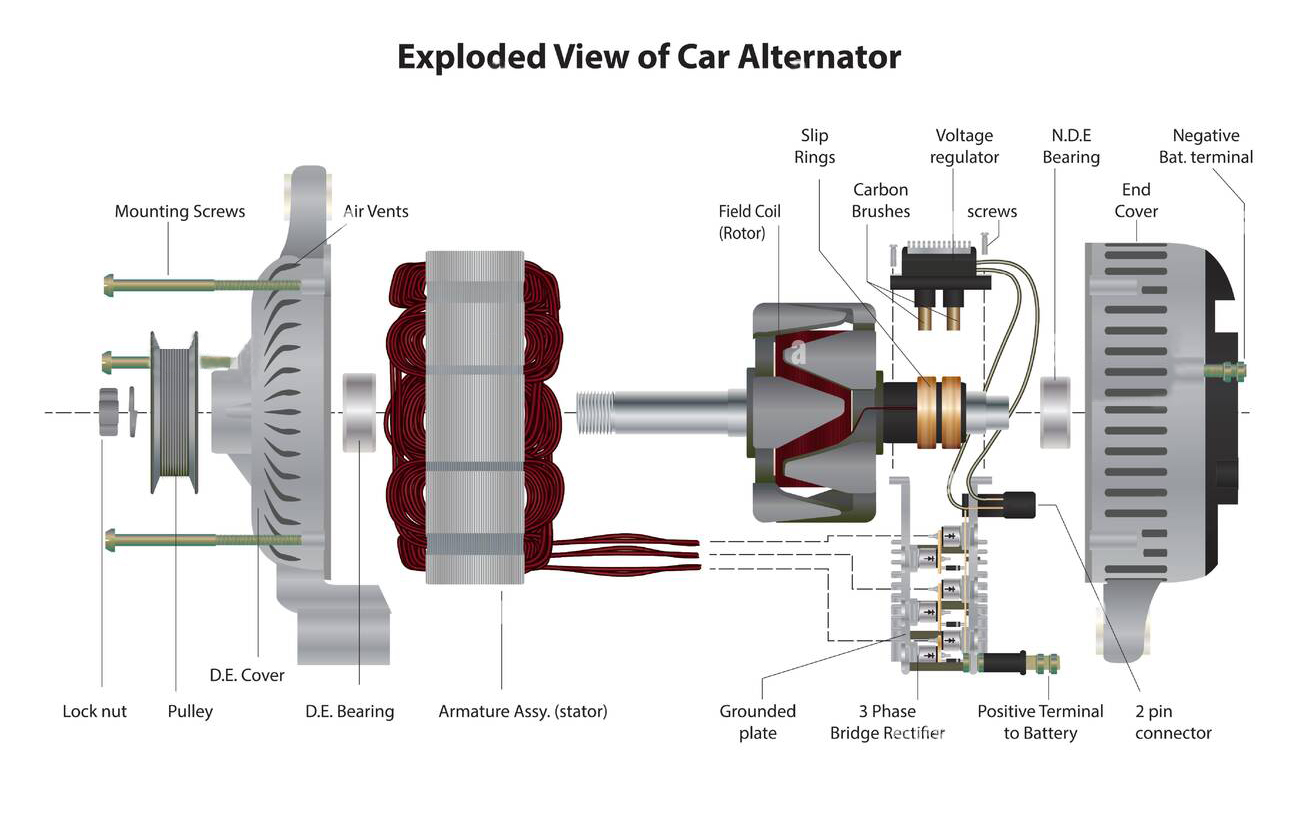 The first half consists of the pulley, bearing, rotor, and front housing cover.

The pulley is connected to a rod passing through a bearing and connected to the rotor or the Field coil. The engine drives the pulley via a belt.

There is a bearing before and after the rotor, which allows for rotating the magnets inside the rotor.

The Front Cover, or the housing, covers the first half and houses a fan that cools the alternator to maintain efficiency.

The second half consists of the stator or stationary armature, rectifier, carbon brushes, voltage regulator, slip rings, the positive and negative terminals, pin connectors(the number of pins depends upon the wire configuration), and the end cover.

The stator houses a set of copper wires. The electricity is generated when the magnet spins over the wires.

The wires are wound in a circle along the circumference of the magnets.

Carbon brushes are used to conduct the generated electric power from the D.C. source (mostly a D.C. generator mounted on the same rod as the rotor) to the magnetic coil of the rotor to create a magnetic field.

Read More:  How to Remove Spark Plug Boot That Is Stuck? [Step-By-Step Guide]

Carbon or graphite is used because it’s a really good conductor of electricity. It provides lubrication because it sits in contact with the slip rings while they rotate.

Graphite also has a really high melting point (around 3500 C). It has lubricating properties, so it deals with heat better compared to other conductive materials.

The voltage regulator controls the flow of voltage coming from the alternator and how much needs to be sent to the battery to power different components of the car.

The negative terminal is connected to the ground, which takes care of excess electrical power and completes the circuit.

The connection pins connect the alternator to the ignition and, depending on the configuration, will be related to different aspects of the dash. 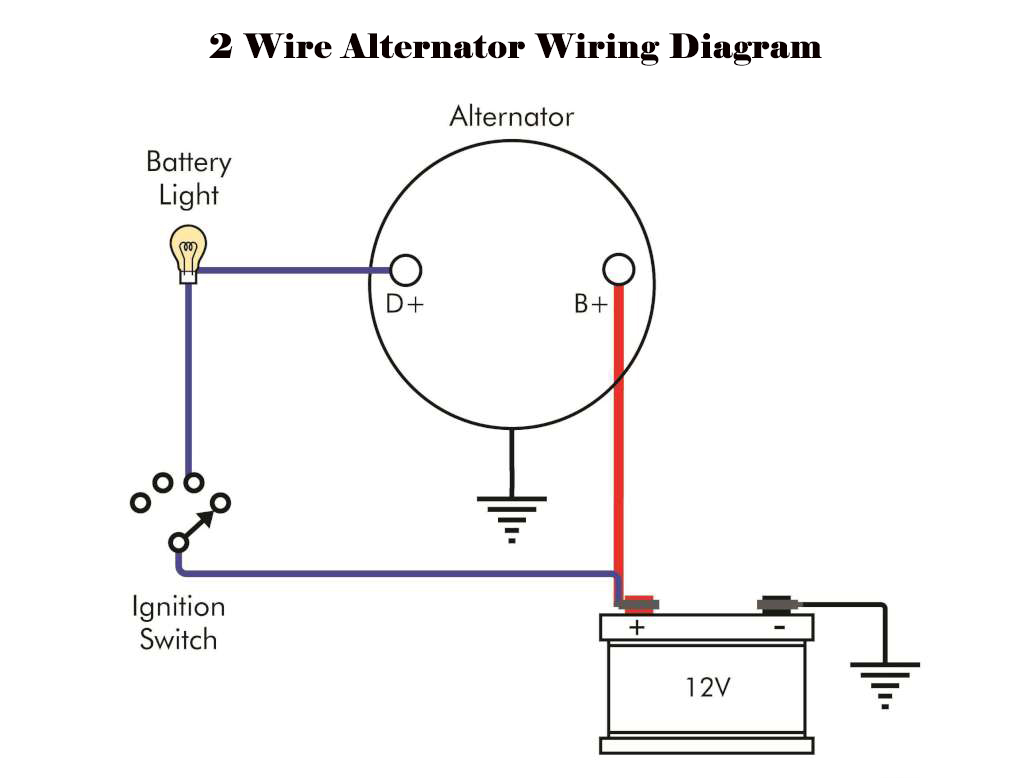 A 2-Wire alternator is used in basic applications. One wire from the positive terminal of the battery is connected to the ignition switch, and an external voltage regulator to complete the excitation circuit.

The excitation circuit is also connected to an indication lamp which shows the “battery light” that lights up when you turn the ignition switch.

2-Wire alternators use an external voltage regulator to excite or start up the engine using the power of the battery and regulate the voltage for battery charging.

The second wire connects the output wire (charging wire) of the alternator to the positive terminal of the battery.

Pros And Cons Of A 2-Wire Alternator 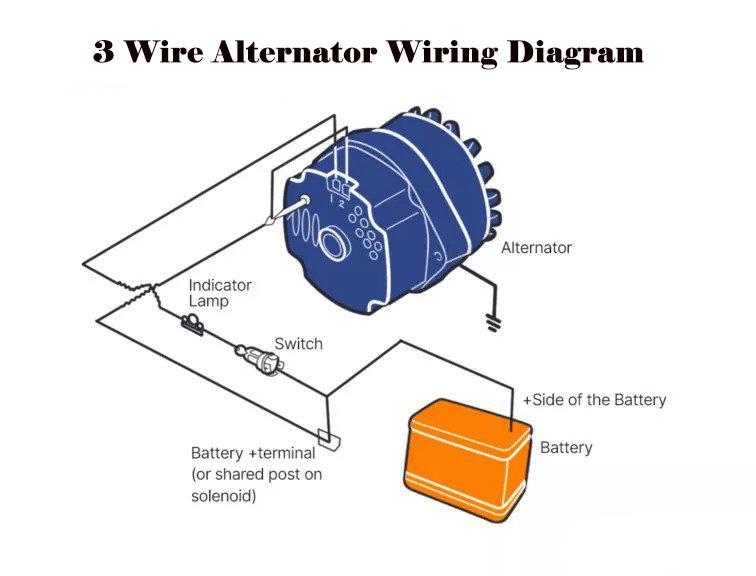 When switched on, I.G. or 2nd wire is connected to the ignition switch and completes the excitation circuit.

The 3rd wire can either be connected to the Warning Lamp or Voltage Sensor. Some care manufacturers use external voltage sensors to regulate voltage and ensure even distribution.

Some car manufacturers use a sort of built-in voltage sensor that is jumped from the B+ wire, and the 3rd wire is used for Warning Lamp or the “battery light.”

The voltage sensor works with the voltage regulator and rectifier to maintain all components’ voltage distribution efficiently and evenly. The sensing happens at the fuse box and ignition.

Pros And Cons Of 3-Wire Alternator

Read More:  Is A Muffler Delete Bad For Your Car [Potential Risks] 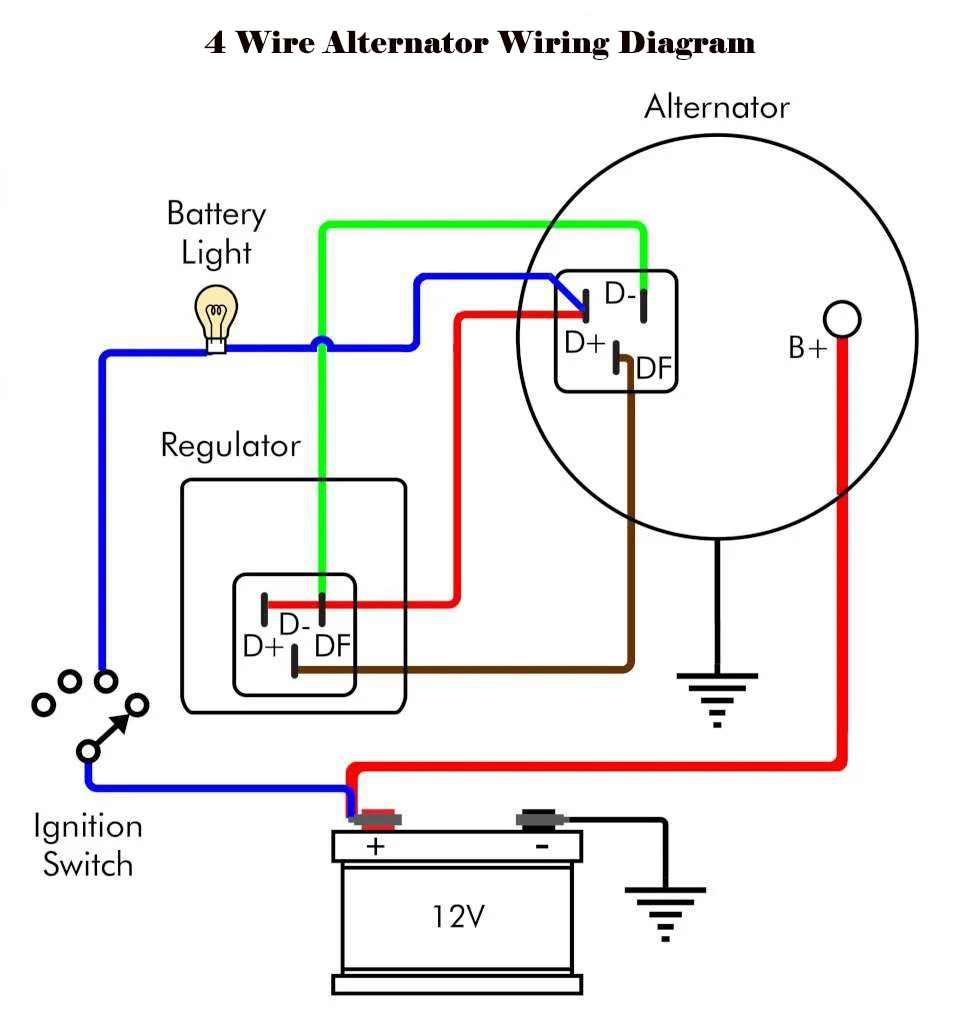 The 1st wire in the alternator is the alternator output wire which charges the battery. It is also connected to the fuse link, which has a voltage regulator for battery charging.

The first wire is often denoted by B+ or BAT+.

The 2nd wire is usually a Lamp wire which is for the battery sign in the dash. It lights up when the alternator is not charging the battery.

The 3rd wire is the Field wire. This wire is connected to the ECU and gives the command to the Lamp to light up when the alternator is not charging the battery.

The 4th wire is the sensing wire which works in coordination with the regulator, ECU, and ignition to maintain the voltage throughout the charging and electrical system.

Pros And Cons Of 4-Wire Alternator

Some car manufacturers only use one or two types of alternators, while others use all kinds. It all depends on the different types of vehicles they have in their lineup.

GM used 2-wire alternators in its old cars like the 5thGen Camaro, and it can still be found today in some late L.S. truck engines.

The 2-wire was cheaper to produce and simple, and cars at the time did not have many electrical components linked to the ECU besides that standard, such as ABS. 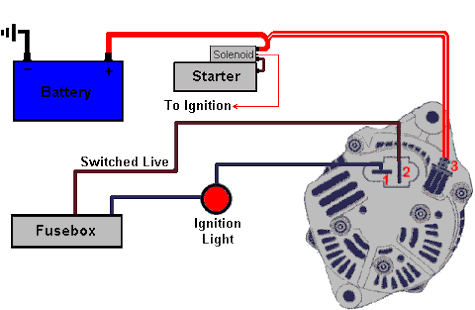 3-wire alternators are used in 6thgen Camaro, CTSV, and newer cars. Cars started to have more electrical components such as Vehicle Stability Assist and Traction Control. 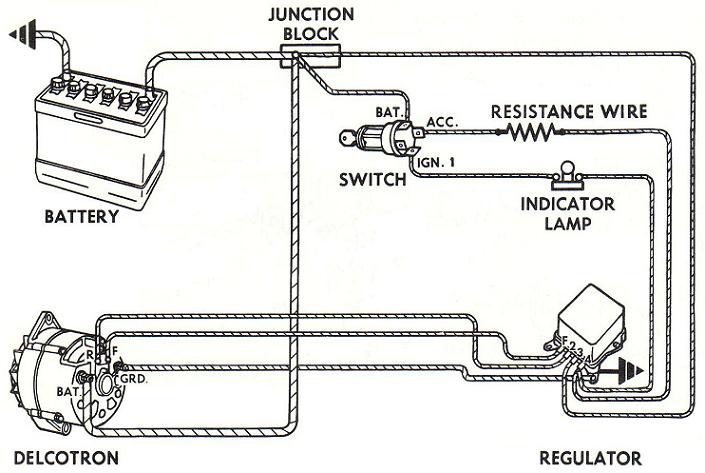 The 4-wire is used in LS1, Corvettes, Escalade, and the latest trucks and cars. These are used when vehicles have several electrical components with a big engine. 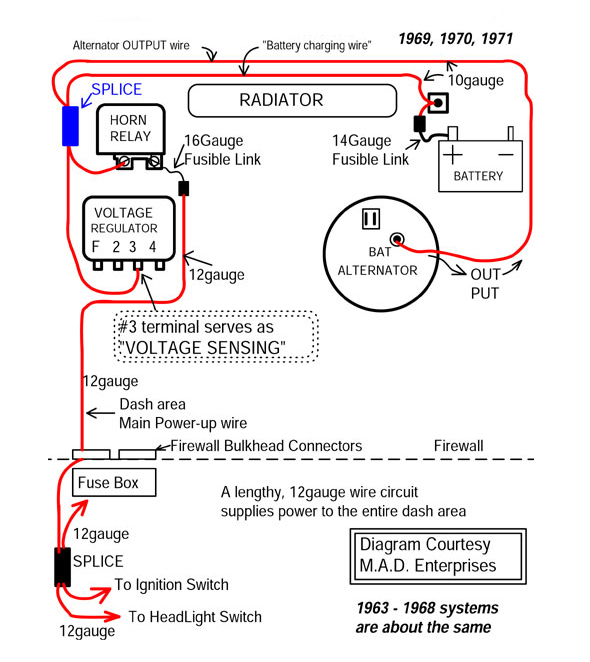 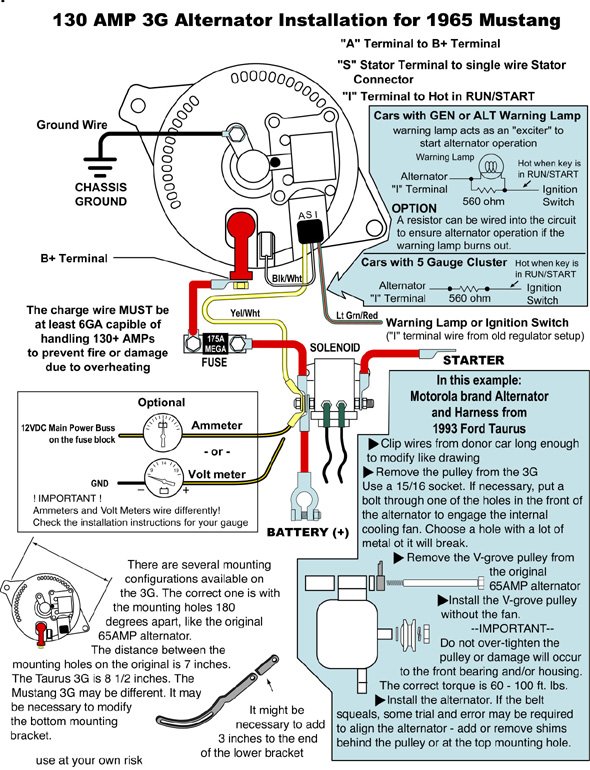 Used in Ford Mondeo, Escort, Focus, previous gen of Mustang and F-150, and other midsize to compact cars and some basic trucks. 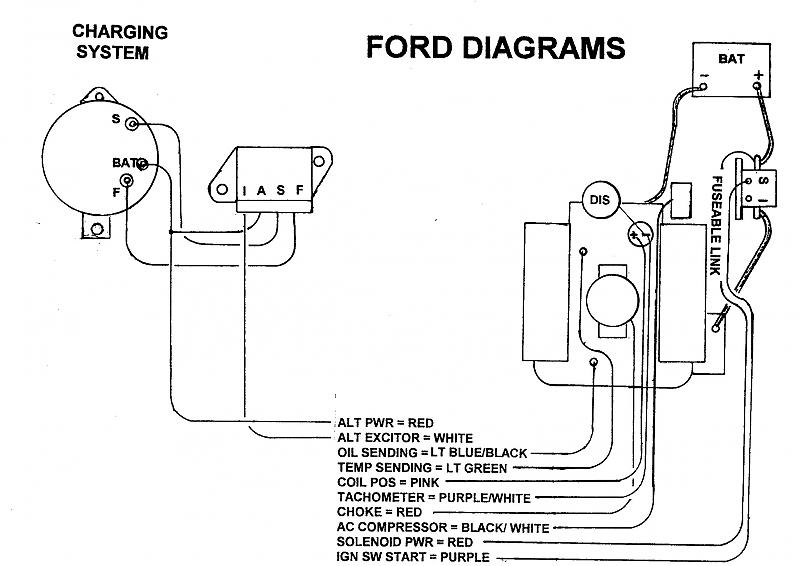 They are used in the latest Mustang, Raptor F-150, G.T., and other performance cars and trucks. 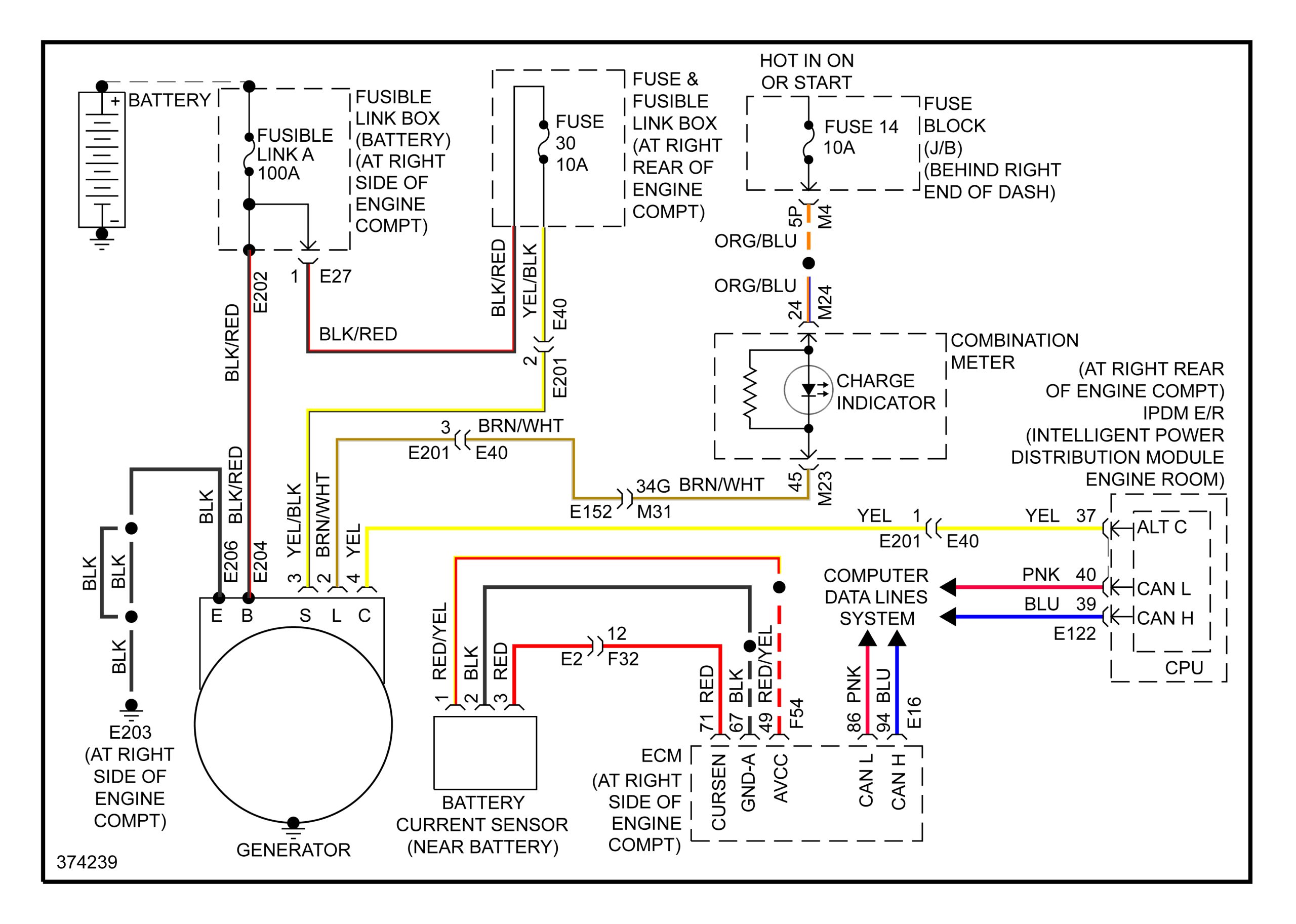 They are used mostly in newer cars after 2008 with bigger engines and SUVs. The Nissan GTR and Patrol are good examples. 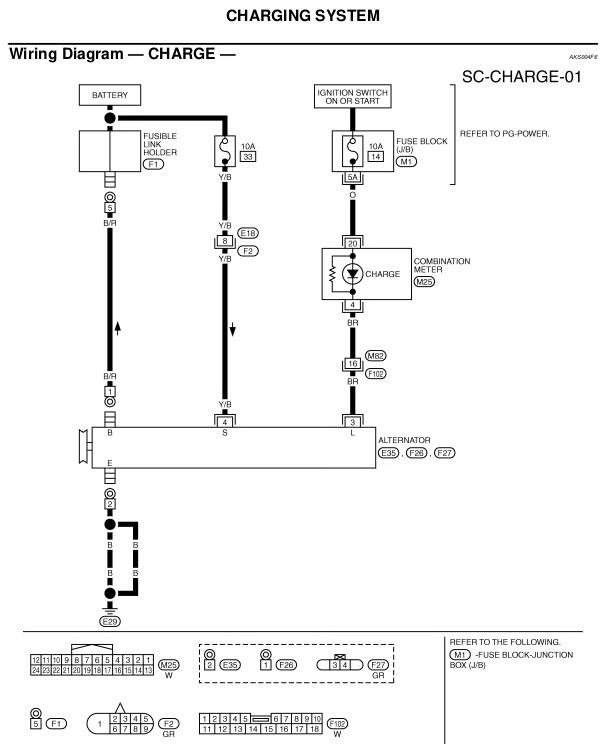 They are used in small compact cars and midsize sedans like the Murano, March, and Wingroad. Toyota uses an internal regulator and uses this layout of alternators across most cars. 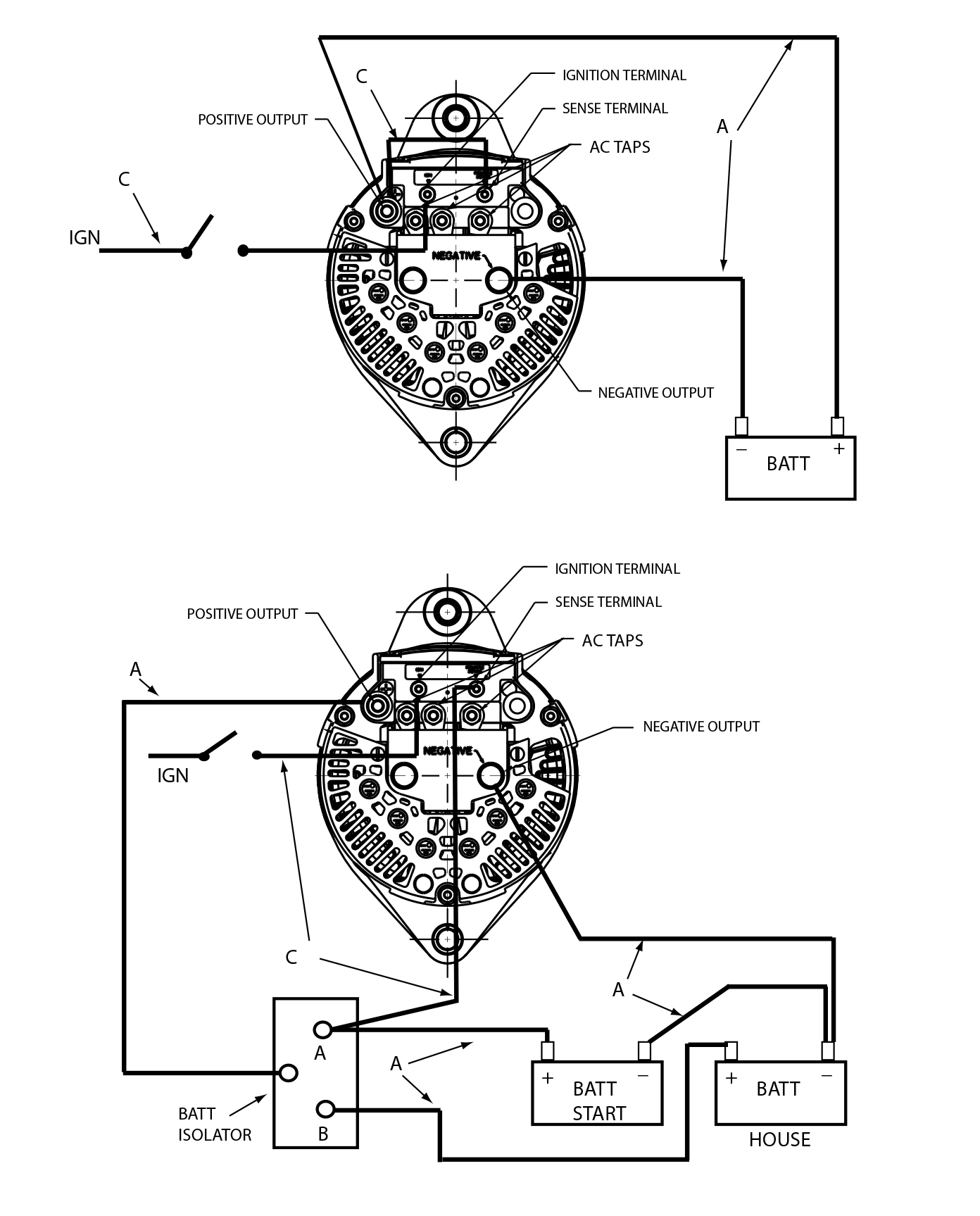 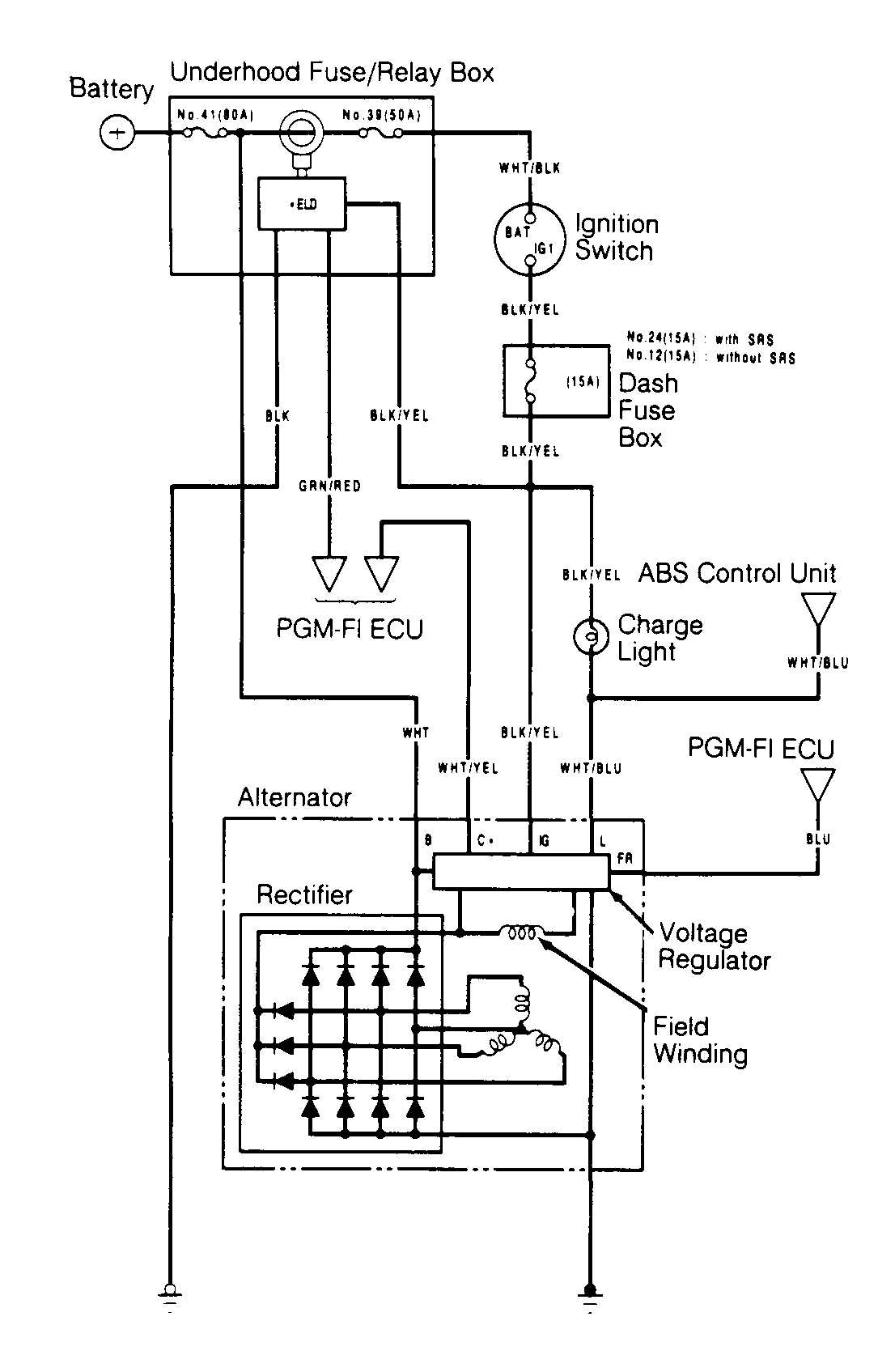 Honda Integrates the ECU in the charging circuit because of various electronic components that require precise electrical power at precise times to engage.

V-TEC is an excellent example as it requires constant accurate readings on throttle position and oil pressure to engage the V-TEC. 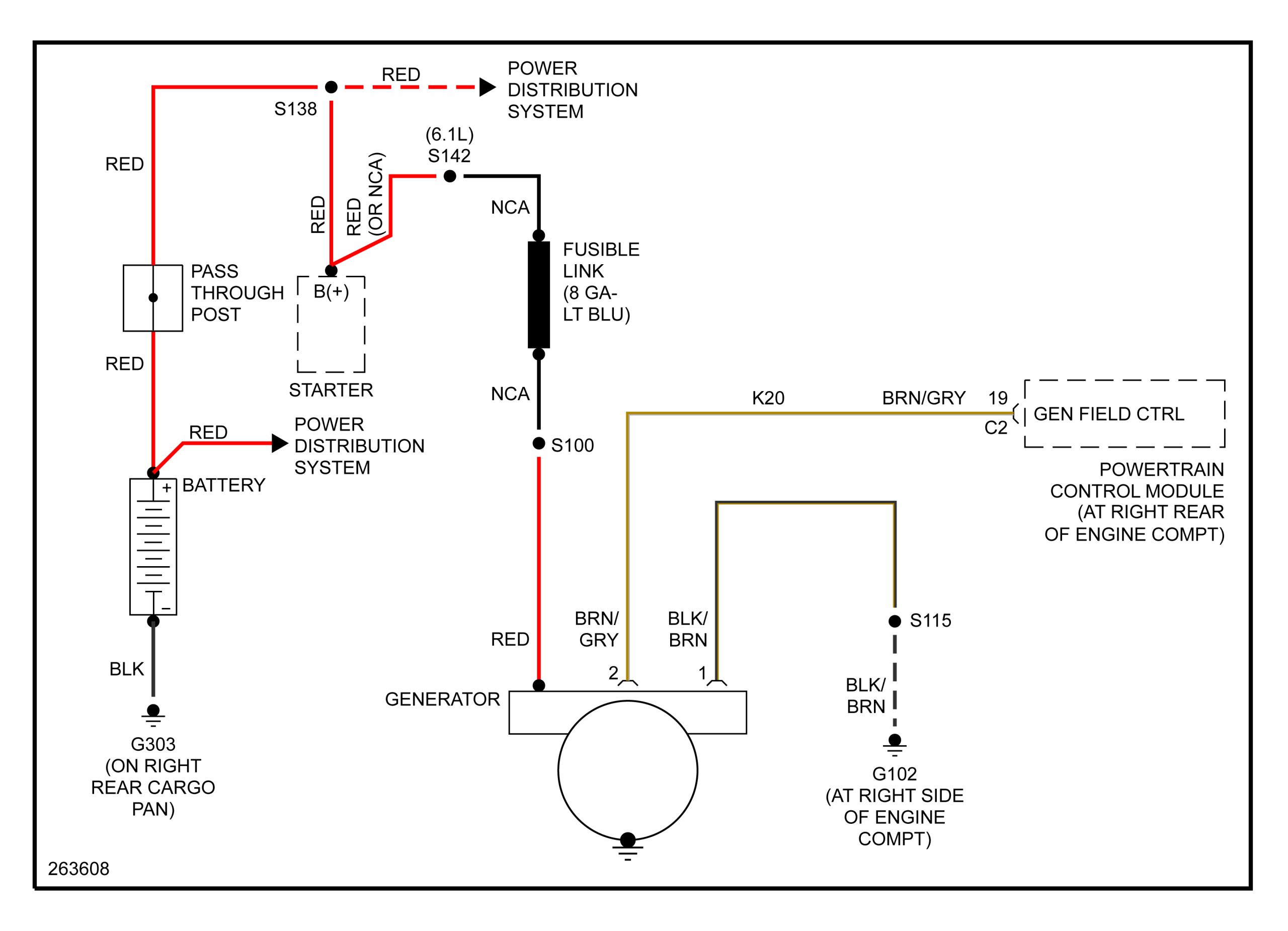 Dodge mainly uses a 2-wire alternator which circuit jumps to integrate other components such as ECU (PCM), power distribution center, fuse box, and the voltage regulator.55

Delco Remy makes 2,3-wire alternators for G.M. They are used mostly in compact and midsize sedans. 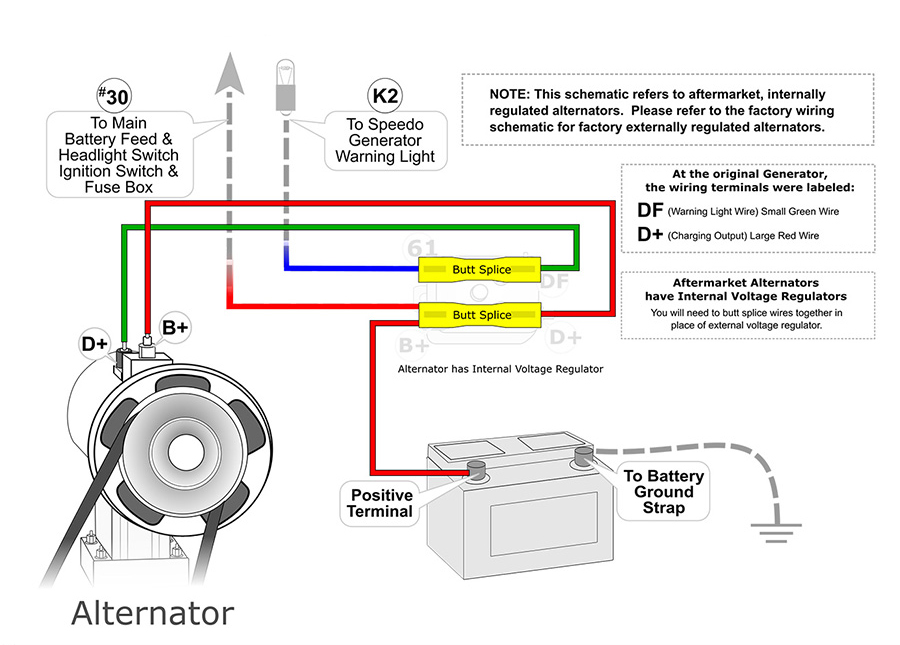 It’s a common misconception that the battery powers the electrical component, but in reality, it’s the alternator.

The spark intensity of the spark plugs comes from the alternator as well.

Compact cars are usually made for the masses and need to be cheap to produce. They also have smaller engines, so they require less power management. That is why a 2-wire alternator makes more sense.

Hybrid cars are different but usually use 3-wire and 4-wire alternators for better power management and consumption.

Can you jumpstart a car with a bad alternator?

You can jumpstart a car with a bad alternator. Still, suppose the alternator is producing less power than the requirement. In that case, the vehicle will stall and die after running for a few minutes.

How to test an alternator of the car?

Why don’t electric cars have alternators?

Alternators make electricity by being driven by the engine’s crank. No engine means no alternators. Electric cars store the required electrical power in batteries and can be charged after the battery is drained.

Do Tesla cars use alternating current?

Can a bad alternator keep a car from starting?

A bad alternator will not charge the battery sufficiently. When you try to start the car, it will not provide enough spark intensity or energy to turn the crank through the starter motor.

Can a car run without an alternator?

It mostly depends on the capacity of charge inside the battery. But a car can run without an alternator.

How long will a car run without an alternator?

If the battery is fully charged, a car can run for almost 15-20 mins before stalling and dying.