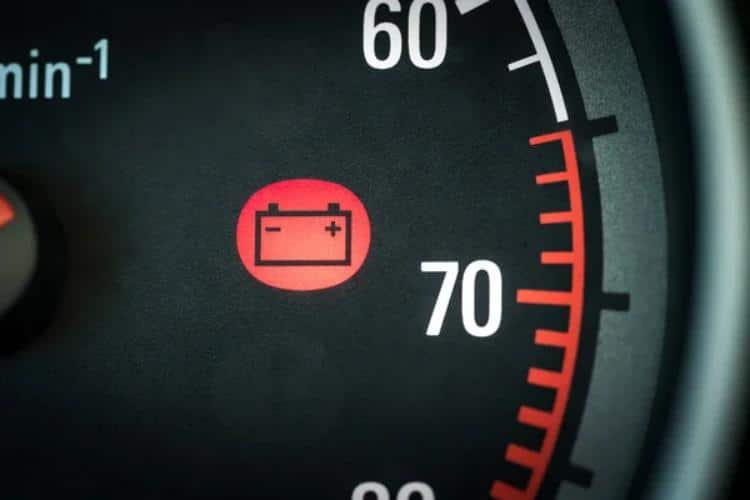 Some cars have volt meters to keep a check on the battery voltage as you drive. But that is a premium feature that is usually seen on performance vehicles or flagship cars.

When the battery light comes on, it could be an indication that something is wrong with the charging system of the battery.

If the battery light comes on while driving or idling and goes away when you accelerate or rev up, it could mean that there is a fault with the battery or the charging.

Let’s see what can cause such a problem and what can be other reasons why you might see the battery light come on, and how you can deal with it.

What Is The Battery Light?

The battery light is a part of the alternator charging system. It is connected to the ignition switch and is part of the “excitation circuit.” It is also integrated into the voltage regulator.

The voltage regulator maintains the voltage generated by the alternator and regulates how much voltage is sent out to charge the battery.

When there is a fluctuation in the voltage being generated by the alternator or voltage charging the battery, the voltage regulator lights up the battery light or the warning lamp.

What Is The Use Of Battery Light?

What Controls The Battery Light?

The ECU controls the battery light. The ECU works in coordination with the voltage regulator.

The voltage regulator records the voltage readings and sends these readings to the ECU. Then the ECU turns on the dash light since the warning lamp is connected to the ignition switch and doesn’t need a separate power source.

The battery light is preset to come on in certain situations. The company puts in the preset to indicate to the driver the system’s status. Let’s see what are different scenarios when it is common to see the battery light;

When you turn the ignition to “on”(not turning to start), you can see various lights come on.

After you start the car, all the lights are supposed to go away. If they are still on, it could be a sign of malfunction or error in that component.

When the car stalls out or “dies”, it basically goes back on the ignition or “on,” so all the lights come back on.

What Does It Mean?

When the light comes on before you start the car, the ECU does a system check to ensure all the sensors and components are working.

When the car dies, all the lights come on, including the battery light, which is also a feature of the car.

This is to show you which components are still working.

Read More:  How To Check Tire Pressure Without Gauge [4 Methods]

If any specific light doesn’t come on, it could mean that a specific component is no longer working.

Battery Light Comes On While Driving

The light could come on when the car is stalling out. It is most common in manual cars than in automatic cars.

The battery light can come on when excess bumps or vibrations from the road cause a loose battery terminal. 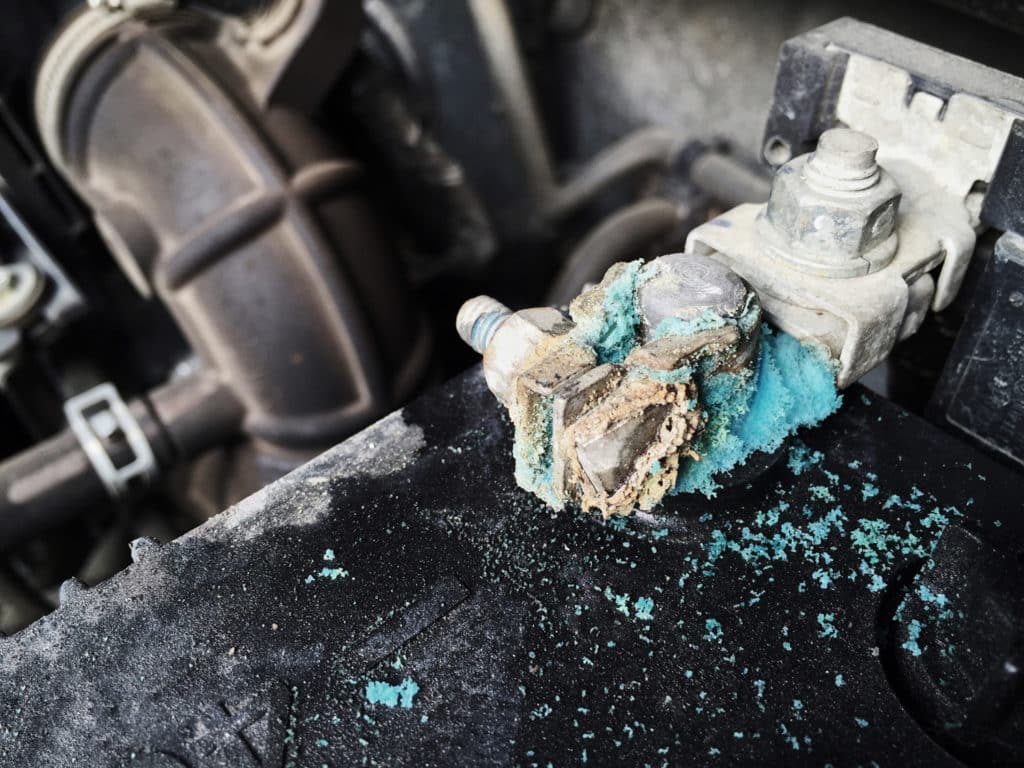 The battery light can also come on when there is a malfunction in the dash electronic system. You will see various dash lights come on.

What Do They Mean?

When the light comes on even after starting up, it could mean there is a malfunction in the alternator. The alternator is responsible for generating electricity to power all electrical components of the car.

A loose battery terminal can also keep the battery from charging. When the voltage regulator senses that the battery is not receiving enough charge, it sends a message to the ECU and that lights up the battery light.

If alternator terminals are loose, the insufficient charge goes toward the battery. This reduces the overall electric power being supplied to the electrical components.

The voltage regulator and ECU sense the reduction in electrical charge and light up the battery light to alert the driver of the problem.

When there is corrosion and build-up on the battery terminals, this creates resistance in battery charging, creates a load on the alternator, and creates fluctuations in the charging, causing the battery light to come on.

Sometimes there is a malfunction in the dash light circuits due to corrosion or damage, causing the dash lights to come on. The LED lights come on due to an arc jump or leak in the electrical wiring.

When the car is stalling and the battery light comes on, it means the alternator is weak. It could be a damaged pulley or something wrong with the alternator.

You can prevent something like this by getting regular maintenance. The mechanic will check the serpentine belt and the voltage readings to check the health of the alternator.

Loose battery and alternator terminals also cause the battery light to come on. Battery terminals come loose due to temperature changes, debris from the road, vibrations, and damage from the road.

The damage to the circuit can be due to water damage which can happen while washing your car, humid weather, compromised rubber seals, salt water, or heat from the engine or environment.

How To Fix It?

If the alternator is damaged, then you can probably have it repaired rather than having a replacement.

Not all mechanics can change just a pulley, and no alternators can change their pulley. But changing the pulley, if it can be, can cost around $150.

Carbon brushes and slip rings need to be replaced, which costs around.

Carbon brushes cost around $100, and slip ring replacements may cost about $200 because they are labor-intensive.

Battery and alternator terminals can cost around $50 to replace.

Fixing a fault in the dash electrical circuit usually requires changing the circuits or wiring replacement. That costs around $150-$200.

Connection Of Battery Light and Acceleration

The alternator generates electricity by inducing current by magnetic flux. This happens when a conductor spins in a magnetic field or a magnet spins in a coil of conductor wires.

The rotor, which has the magnet mounted on it, spins between the stator arms, inducing current. The rotor spins by a pulley which is driven by the crankshaft.

The crankshaft drives the pulley by a serpentine belt. When the crankshaft rotates faster, more electric power is produced.

As the engine revs up or when you accelerate, the rise in RPMs means a faster spinning crank. Higher RPMs mean higher electrical power production.

Why The Battery Light Goes Away When You Accelerate?

A situation where you see the battery light come on and it goes away when you accelerate could be due to several reasons.

It could be because of a weak alternator, damage to one of the parts of the alternators, or damage to the pulley or the serpentine belt.

All of this just means the alternator is doing weak charging. The battery light goes away when you accelerate or rev up your engine.

The battery light goes away when you accelerate because the crankshaft spins faster, creating excess power than what is consumed.

This compensates for the weak charging as long as you’re accelerating or on high revs. The alternator will not charge the battery efficiently while idling and may cause the car to stall out every now and then.

How Can You Fix It?

If the revs fall or the lights start flickering, it is a sign of weak alternator charging. You can connect the voltmeter to take readings to ensure to check the charging level by following these steps;

It is better to attend to this matter as soon as possible because it means you have very little time before the car stalls and dies. It can usually run for around 15-45 mins. If the alternator is not charging, you’ve got about 20 minutes.

If the alternator is weakly charging, you have around 45 minutes before the car stalls and dies.

It is better to reach a safe place, preferably a workshop, and have this attended to, or you can end up deserted. The battery light is put in the dash to alert the driver.

This whole situation can be avoided with regular maintenance work. During maintenance, the mechanic always checks the voltage reading to check the health of the charging system.

Q.1) Can I keep driving with the battery light on?

Q.2) Does the battery light mean a weak battery?

A low battery will not cause the battery light to come on. It shows the same symptoms as a weak alternator. Flickering lights, car A.C. is switching off every now and then EXCEPT for the battery light.

Q.4) How often do I need to change the carbon brushes in an alternator?

According to espares.co.uk, carbon brushes last around 2-10 years, depending on how much you drive each year and weather conditions.

Q.5) How long does an alternator last before it needs replacement?

Alternators have different components, each with a different lifespan, but the complete alternator needs to be done.

But on average, an alternator lasts around seven years or 80,000-150,000 miles before it needs replacement.