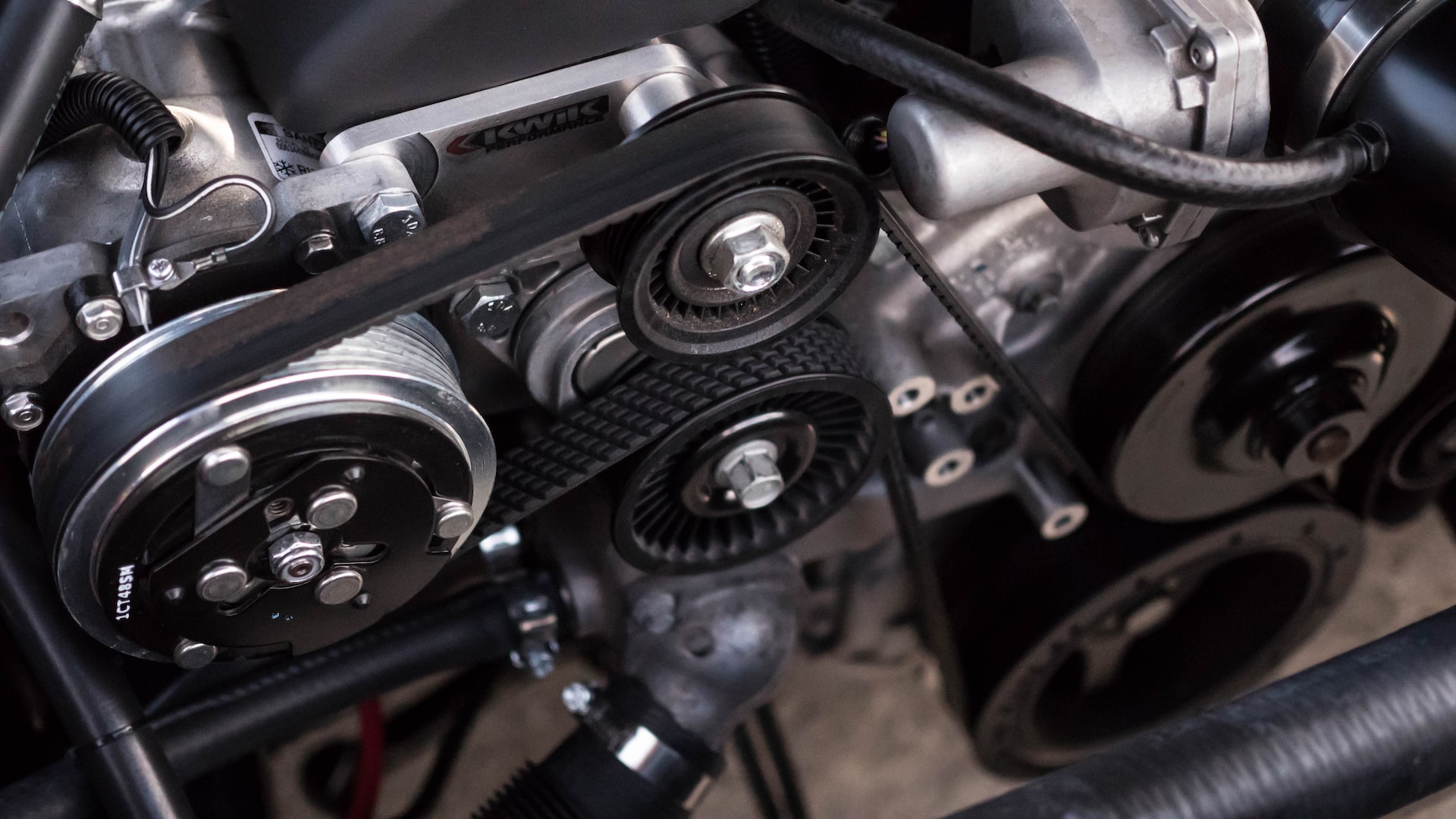 A serpentine belt is an essential component of your car that makes the engine run more efficiently. It runs other systems such as an alternator, water pump, air conditioning compressor, etc. But can a bad serpentine belt cause rough idle?

A rough idling car is when your car engine is running, and its wheels are not moving, but you can notice disturbing vibrations or shaking. The RPMs are also inconsistent, and you can hear a slipping sound from your car’s engine.

The serpentine belt turns the pulleys to work together with other accessories as a part of the machinery to move the vehicle along. A bad serpentine belt may prevent the pulley from turning correctly and consistently. So, you can hear the slipping sound and the unusual vibrations of the auto parts, as they are not held properly by the worn-off serpentine belt.

As it turns out, a bad serpentine belt can cause rough idle. If it is not tight enough or worn out, it won’t run as smoothly as it should. The pulleys and components driven by this belt fail to run smoothly, causing unnecessary vibrations in the engine.

A bad serpentine belt should be replaced immediately to avoid associated problems. It will show signs when it nears the end of its service life.

Read on for detailed information about the effects of a bad serpentine belt and the cost of replacing it on your car.

What is a Serpentine Belt, and What Does It Do?

A serpentine belt is one continuous or winding belt that drives multiple devices attached to your engine, which include the following:

The serpentine belt transfers power from the main pulley to the pulleys attached to these accessories. The main pulley is coupled and drives directly to the engine’s crankshaft.

The serpentine is located outside the engine block. So, it is easy to identify it when you open the hood and check the engine bay. From its name, the serpentine belt coils around vehicle components.

But why would you want to replace a serpentine belt? It might be contaminated with fluids, which causes slippage. This belt also wears over time due to frequent use.

Fortunately, a serpentine belt will always alert you when it is time to replace it. It shows signs and symptoms, as we will see later.

Can A Bad Serpentine Belt Cause Rough Idle?

If you have been asking yourself this question, the answer is yes. A Serpentine belt is an essential component of an engine system directly coupled to the engine’s crankshaft through the main pulley.

If the belt is worn out or damaged, it runs roughly. This will cause general shakiness of the engine at low speeds or when idling.

Read More:  Why Does My Car Shakes When I Hit 60 MPH [When Driving]

The accessories driven by a bad serpentine belt will also have unnecessary vibrations, which can be transmitted to the cabin. These factors contribute to a rough engine idle.

In other words, a damaged serpentine belt causes poor driving experience as the components fail, one after the other.

How Long Does a Serpentine Belt Last?

The typical lifespan of a serpentine belt is about 50,000-10,000 miles, but that depends on different factors. The model year, driving habit, brand, and vehicle mileage all affect the service life of this belt.

Also, the vehicle maker can determine how long the serpentine belt lasts. Different manufacturers use different methods and materials, which affects their lifespan.

Older serpentine belts were mainly made from neoprene rubber. These have a shorter lifespan than modern ones made of ethylene propylene diene monomer.

If your serpentine belt has an automatic tensioner, ask your mechanic to replace them. They likely wear out simultaneously.

The good news is your serpentine belt will not snap out of the blues. It fails intermittently, showing signs that alert you of the impending failure. The following are the most common symptoms of a failing serpentine belt:

A misaligned or slipping serpentine belt produces a squealing sound. The belt may need realignment or proper tensioning to clear the noise if you hear this sound. But the serpentine belt is damaged and should be replaced in some cases.

There can also be a whining sound, which increases and decreases as you accelerate and decelerate. This happens when the serpentine belt is too tight. The high tension puts more load on the bearings and pulleys driven by the belt.

The whining noise tells you the accessory pulleys are overloaded, pointing to the serpentine belt issue.

As mentioned, the serpentine belt drives the air conditioning compressor. If it is damaged or slackened, it will slip over the pulley that turns the compressor.

Do not conclude that the serpentine belt is the culprit when no cool air comes from the AC vents. It is the likely victim if the air does not come from the vent, but sometimes it is the AC compressor.

Check the serpentine belt if there is no air conditioning. But if it is okay, check your entire AC system, including coolant.

The serpentine belt slippage can be caused by loss of tension due to a defective belt tensioner or pulley misalignment. The belt may slip from the pulley grooves if the belt is overly loose.

Also, the serpentine belt may be misaligned with the pulleys. This will definitely cause it to slip.

The serpentine belt suffers constant wear and stretching forces. It becomes too loose to stay in the pulley grooves without proper tensioning.

Replacing the tensioner or the serpentine belt can help to solve the slippage problem.

Power steering makes it possible to turn the wheel with minimal effort. That is aided by a power steering pump driven by the serpentine belt.

As stated, a serpentine belt drives the water pump and radiator fan. These are essential components of your car’s engine cooling system.

A bad serpentine belt causes the water pump and radiator fan to stop functioning. The result is a lack of engine cooling, leading to a rise in engine temperature.

Ask your mechanic to check your serpentine belt for wear and physical damage during every engine service. It makes it possible to catch any issues with it. And, of course, a visibly damaged serpentine belt should be replaced.

As mentioned, serpentine drives other engine accessories and should run smoothly. A damaged one may not comply with this expectation. It is likely to run rough and cause engine vibrations.

This is straightforward if you understand how your car’s alternator works. This engine accessory generates electricity that charges the battery and runs other electrical systems, including vital engine functions.

A faulty or damaged serpentine belt may fail to drive the alternator. The result is a lack of enough electrical power for your car’s computer to control fuel injection and ignition timing. The engine may begin to misfire and eventually stall.

The check engine light is just one of the many dashboard lights that can come on when your serpentine belt is damaged. It is a vital component that ensures the proper functioning of other systems.

Engine overheating, misfiring, and experiencing rough idle are possible effects of a bad serpentine belt. These will cause the check engine to light up on your dashboard.

This also relates to the alternator operation. When starting the engine, the battery provides power to the starter motor to crank the engine. The car engine should run the alternator to generate electricity for continued operation.

There is no fixed cost of replacing a damaged serpentine belt because it depends on the car’s make, model, and year. The labor fees also vary from location to location.

Fortunately, a serpentine belt is affordable. The part costs about $25-$75, but you will pay an additional $100 to $200 in labor fees. You can save if you are a DIYer and decide to do it yourself.

What happens to a car when the serpentine belt breaks while driving?

There will be a sudden loss of power steering and air conditioning. This will be followed by engine overheating and many dashboard lights coming on. If your battery is good, you can drive your car for a few minutes, but overheating may cause damage.

What happens if you drive with a bad serpentine belt?

You can drive your car with a bad serpentine belt. But that depends on the condition. The engine will overheat and stall if the belt cannot run the water pump and alternator. You may not go past your driveway in these conditions.

Can a serpentine belt affect transmission?

No. The serpentine belt has nothing to do with the transmission since the two are not connected. If the serpentine belt is damaged, only the alternator, water pump, power steering pump, and other engine accessories are affected.

Read More:  Why Do My Spark Plugs Keep Burning Out? [Here’s Why]

Can I run my engine without a serpentine belt?

How long can a car run without a serpentine belt?

A serpentine belt drives vital engine accessories such as the water pump and alternator. Without these, the engine will quickly overheat and stall. Depending on the ambient temperature, you can drive for about 30-60 minutes or less, but only if your battery is good.

What causes a serpentine belt to break?

A serpentine belt breaks due to constant wear and tear as it runs at engine speed. But it should last between 5,000 miles and 10,000 miles. If your belt breaks earlier, the problem can be the pulley alignment or belt tensioner.

What are belt pulleys?

Belt pulleys are the ones that the serpentine belt turns, to which these pulleys have a cylindrical mechanism and bearings that help them spin. The main crank pulley on the crankshaft drives all the other pulleys (alternator pulley, power steering pump pulley, and AC compressor pulley) using the serpentine belt.

With the pulleys in motion, it activates the accessories. The alternator pulley is involved in forming a magnetic field and converting it to electricity for the alternator to work.

Generally, the power steering pump pulley makes the hydraulic fluid pressurized and circulates for easier turning of the steering wheel.

What is considered a bad serpentine belt?

A bad serpentine belt can cause rough idle and many other things. It is a vital engine component in driving accessories such as the water pump, alternator, radiator fan, air pump, etc.

You should always inspect your serpentine belt and replace it on time if damaged. A damaged belt will show signs, as described in this post. So, replacing it on time enhances the overall vehicle performance and drivability.