The spark plug’s function is to ignite the combination of air and fuel in the combustion chamber.

It ensures that the engine has adequate power to start as it transfers heat away from the ignition chamber. And today, you’ll be learning more about that.

What is an O2 Sensor? 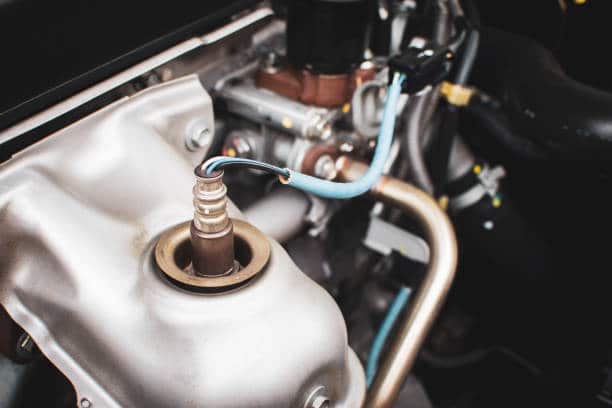 The O2 sensor is designed to assist the engine in maintaining a certain air-to-fuel ratio that optimizes power, fuel efficiency, and pollutants.

O2 sensors were created in the late 1960s by Robert Bosch GmbH under the guidance of Dr. Günter Bauman.

Its original sensing module comprises a thimble-shaped zirconia ceramic covered with a small coating of platinum on both the exhaust and reference sides. In addition, it comes in both heated and unheated versions.

What are O2 Sensor Codes?

When an O2 sensor fails, a DTC (diagnostic problem code) is stored in the ECU, and the check engine light turns on.

A scanning tool is required to retrieve the DTC. There are normal or general OBDII codes and enhanced or OEM particular codes. The following is a graph of some of the most common O2 Sensor error codes.

Symptoms and Dangers of a Faulty Oxygen Sensor

When your car’s oxygen sensor fails, your check engine lights will most likely flicker, a typical problem.

While your automobile is operating, the O2 sensor checks the balance of oxygen and anything else in the exhaust. It notifies you if additional oxygen is needed in the mixture before everything burns out.

By replacing your O2 sensor, you will receive better mileage than if you had a defective one. However, keep in mind that the difference is gradual and will worsen over time.

Retaining and using a faulty O2 sensor might harm your expensive catalytic converter, which is costly. Here are some symptoms to observe to determine whether you have a malfunctioning O2 sensor.

Contact a competent automobile mechanic as soon as this light illuminates for a Check Engine Light assessment.

Your Check Engine Light can illuminate for a variety of reasons. So it is essential to have it examined by an expert who can accurately determine the underlying problem.

If you have a high-mileage car, there’s a significant possibility it has a faulty oxygen sensor that has to be replaced.

The fuel delivery and combustion systems will suffer more negative effects if the oxygen sensor fails.

Your vehicle’s mileage will be severely affected if a faulty O2 sensor disrupts the air-fuel ratio mixing or when excessive fuel is fed into the engine.

Additionally, excess gasoline in the engine can give off a sulfurous, rotten egg odor and black exhaust.

If you fill up your tank more frequently, keep track of how many gallons you use and how often you do it. Get your oxygen sensor checked by a competent technician if the amount is very high.

In case you didn’t know what an engine misfire is, it’s when one or more cylinders in an engine fail to create power. Several probable causes range from a fouled spark plug to a blocked fuel injector or a defective oxygen sensor.

You may notice your car running rough, misfiring, or making erratic noises while idling when your oxygen sensor fails. Other engine performance issues, such as loss of power, hesitancy, or stalling, may also be seen.

Because the oxygen sensor output controls engine timing, ignition intervals, and the air-to-fuel ratio. A malfunctioning sensor can cause a harsh or irregular engine idle and other engine-related difficulties.

When should you replace your O2 sensor?

Your oxygen/O2 sensor does wear out over time and will need to be replaced. The replacement of a defective or malfunctioning oxygen sensor reduces the amount of pollution your vehicle emits while keeping your engine operating smoothly and efficiently.

Schedule an appointment to have your oxygen sensor changed as soon as you detect your check engine light, low gas mileage, or an erratic engine idle.

This ensures that your car will run smoothly and efficiently, extending the life of your engine.

How many O2 sensors does my car have?

Read More:  Can You Mix Air and Nitrogen in Tires?

Modern V-6 and V-8 engines may feature up to four oxygen sensors, one in each cylinder bank and another after your catalytic converters.

If either the cylinder block oxygen sensor or the catalytic converter oxygen sensor fails, your car may have major engine troubles.

Can you not replace your O2 sensors?

This video briefly explains removing a vehicle’s faulty oxygen sensor. The video includes what you need to keep in mind when replacing your O2 sensors and the required tools and materials for the job.

It also includes a few useful tips and tricks you might want to try out if you’re having difficulty and proper instructions on how to complete the process.

You certainly have the choice not to change your O2 sensors. But it will cause damages to your vehicle over time, one issue worse than the last. It would be ideal for replacing your O2 sensors before the worst happens.

It’s best to replace your sensors in pairs for maximum efficiency. If you have difficulty removing your O2 sensors with the tools you already have, you could use an O2 sensor removal kit, which offers various sizes to fit your sensors.

What are the different parts of the O2 sensor?

The thermal-driven electrochemical fuel cell of the sensor is built of Zirconium Oxide (ZrO2), a chemical substance.

Two Platinum electrodes (Pt electrodes) are installed on the ZrO2 to provide a link for the output voltage to a control module. The controller controls fuel trim for the injector pulse cycle using 450 mV as a midway in a voltage range.

While running a fuel trim software program, the sensor’s analog input to the controller is transformed into a digital rich or lean instruction. It modifies the fuel injector’s cycle time and is sometimes called “Block Learn.”

The pump cell is a diffusion gap coupled to a control circuit in the sensor’s Zirconium Oxide. Additionally, the oxygen concentration of the sensor is controlled by the pump cell, which adds or subtracts oxygen from the diffusion gap.

By altering the polarity of the current in the pump cell, input to the electronic circuit changes the oxygen concentration.

The control circuit sends a rich or lean output to the engine control module when the input and trim current flow polarity changes.

What can cause false O2 sensor codes?

Here’s a video about the possible causes of false O2 sensor codes:

It all starts with a story of how different cases might arise and cause problems to your vehicle. This video will narrate a few scenarios that you may have experienced before.

It includes helpful information on what aspects affect a vehicle even though you’ve done what you can to repair or replace your oxygen sensors.

Read More:  What Are The Loose Spark Plug Symptoms?

The video also explains a few things you can do to mitigate a false O2 sensor issue. Feel free to test them out and see which works for you.

Can a faulty EGR valve result in an O2 sensor code?

The P0153 code might be caused by any vacuum leak, including the one you mentioned in the EGR valve control system.

Even if the two codes do not reoccur, you should still inspect the oxygen sensor’s output for proper waveform and output (shifting between 0.2 to 0.9 volts).

O2 sensors in your program should be changed every 100,000 miles since sensor deterioration does not always manifest itself as a fault code.

What codes can bad spark plugs cause?

It would depend on the car’s design and manufacturing. There might be problems if the plugs were not changed according to the owner’s handbook.

A longer spark, for example, might intrude into the combustion chamber of the engine, producing problems.

Your engine might misfire due to bad spark plugs, and you may notice excessive vibration or a lack of power. When the engine’s computer detects a misfire, the check engine light illuminates.

Why would an oxygen sensor fail?

Your O2 sensors could become clogged and contaminated with combustion residue, including sulfur, lead, gasoline additives, and oil ash over time.

The contaminant build-up prevents your sensors from delivering messages to the computer in your engine. Using non-recommended fuel or low-quality gasoline might cause your oxygen sensors to fail more quickly.

Can a misfire cause an O2 sensor code?

It’s conceivable, but not in theory. However, a defective O2 sensor might produce several misfires on a single bank, with the bulk occurring on one or two cylinders.

A defective o2 sensor affects both bank cylinders equally. Although a weak coil or old plug may be more sensitive to the change, rich running may have clogged the number two plug.

Another possibility is that the oxygen sensor is functional but reading an inaccurate ratio owing to the poor plug.

What happens if I unplug my O2 sensor?

When the sensor is removed, the control computer does not know how much fuel to inject to preserve stoichiometry, so it falls back on its backup map, which is problematic.

If you’re getting poor fuel efficiency but more power, your engine is probably running rich. If there was a problem with the sensor’s functioning before it was mounted,

By now, you should know the answer to, “can bad spark plugs cause O2 sensor code?” When Oxygen (O2) Sensors become contaminated with carbon and sooty deposits, they tend to fail.

Like the electrode of a spark plug, the element erodes and wears out. Failure to repair a defective Oxygen (O2) Sensor will almost always result in catalytic converter damage.