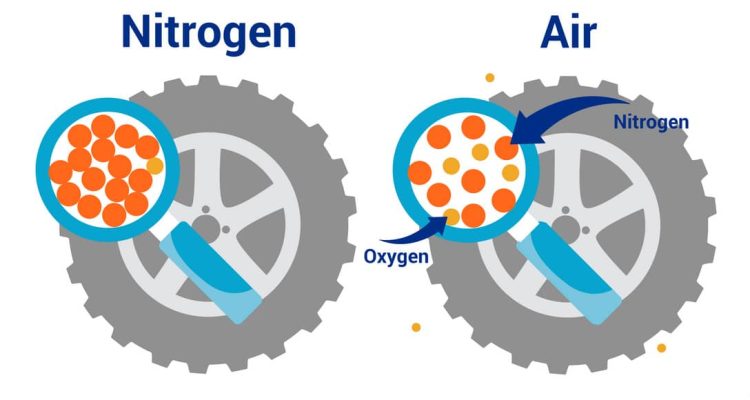 If you are searching for an alternative to inflating your tires, using nitrogen will be the answer. But the next question can come – can you mix air and nitrogen in tires?

This question may be found in forums. Is it okay to mix air and nitrogen in tires?

What will happen when you mix them? Maybe you want to know so that you can take care of your tires better.

The simple answer is yes. You can mix air and nitrogen in tires.

Using nitrogen-filled tires is better. But it is okay to mix air and nitrogen in tires.

So, you will just top off your air-filled tires with nitrogen. There will be no wrong with this.

The benefit is not that great. But you will still have a benefit with the mix.

To see the benefit of nitrogen in tires, you must continually fill your tires with it. Or purge the air from your tires so that you can have nitrogen-filled tires.

If you want to know more about mixing air and nitrogen in tires, you can watch the following video:

Benefits of Nitrogen in Tires

Most drivers say that you will have an edge by using nitrogen in tires. Consider the following benefits to know if nitrogen can be better for your tires:

Read More:  Why Do Diesel Engines Have Two Thermostats?

When the temperature changes, the tire pressure is lost. It can be lost by a 10-degree change in temperature.

But nitrogen is stable. It seeps through the tires so that the pressure will not be lost.

So this is better than air which is lost so easily.

You should know that 90% of blowouts are because of underinflated tires. But having nitrogen in your tires can give stable pressure.

Thus, the potential of a blowout can be lessened.

3. No Fluctuation of Pressure

The air has a little water in it. As the heat comes into the tires, the water will turn into gas which can increase tire pressure.

Whereas, the nitrogen is dry. Thus, no fluctuation of pressure will happen.

Though this may not be significant, it can avoid wheel rot. Though, most recent cars have fuse wheels that have no chemical reaction from the water inside the tires.

EPA has it that mileage can reduce by 0.3% whenever you drop 1 psi in all tires. But since nitrogen does not lose pressure so easily, it can be the best solution for improved fuel efficiency.

Know that underinflated tires have a great need in fuel economy.

There are 300 million dumped tires. This number can lessen to 30% because of nitrogen inflation.

Also, because of the fuel efficiency of nitrogen, you can preserve the environment. Carbon emissions will be lowered.

You can make the environment green by having nitrogen-filled tires.

Experts say that nitrogen-filled tires stay inflated for a longer time. They are better than tires inflated with air.

This is because the molecules of nitrogen are bigger than molecules of air. They do not seep out quickly from the tires.

Your handling will be easier. The tread will not wear easily and the tires will have a longer life.

You can better handle your vehicle because your tires are inflated properly. It can be hard to steer and turn a vehicle with underinflated tires.

Nitrogen-filled tires can help you in handling your vehicle.

Your tread can wear uniformly by using nitrogen. It is because your tires will not be underinflated or overinflated.

No bald spots will be developed and there will be no weak sections on your tires.

You can save money because of this. You do not have to replace your tires all the time.

Read More:  How Many Miles Do Diesel Engines Last?

You can maintain good pressure for your tires by using nitrogen. Thus, you can have a better driving experience.

The tires will have a primal range that will lessen absorb shocks. This can give a good ride even when you are on a highway.

How to Fill Your Tires with Nitrogen

To know more about how you can fill your tires with nitrogen, you can watch the following video:

What Happens When Nitrogen and Air are Mixed in a Tire?

The air will dilute the nitrogen, making it less effective. Even if they are mixed, there will be no bad chemical reaction.

Mixing air and nitrogen in a tire will not harm it.

Is It Okay to MIx Nitrogen and Air in Tires?

You can mix air and nitrogen in tires, but this has risks. The pressure of your tire will be higher.

You will have a bad braking performance. Accidents may happen because of this.

Can You Add Air After Putting Nitrogen to Tires?

Yes, you can add air after putting nitrogen on tires. Air is composed of 78% nitrogen so the air will just dilute the pure nitrogen.

What are the Disadvantages of Nitrogen in Tires?

Read More:  How Long Can You Drive With Battery Light On? [Causes and What to Do]

Does Cold Weather Have an Effect on Nitrogen-Filled Tires?

Nitrogen as gas is affected by temperatures. Tires with nitrogen require pressure in times of fall and winter.

Tire pressure can drop during these times.

How Long Can Nitrogen Last in Tires?

This proves that nitrogen can last longer in tires. A benefit of nitrogen in tires over the air.

Does Walmart Put Nitrogen in Tires?

Since April, 28 Walmart centers have been implementing the ISG nitrogen system. By the end of the year, the installation of the system will be completed.

Nitrogen tire inflation will be good because you can save on fuel consumption. You can also prevent the wearing of the tread.

How Much Is It to Put Nitrogen in Tires?

It may be costly for existing tires because you need to purge the oxygen from them before filling them with nitrogen.

Is Nitrogen Better Than Air in Tires?

Tires lose pressure as time rolls by. The gasses are released from it.

Nitrogen permeates slower by 40% than air in tires. This is a report made by Chemical and Engineering News.

This means that nitrogen is a more stable gas for tires.

Is There a Difference When I Inflate My Car with Nitrogen?

There will be no difference in inflating your car with nitrogen or air. You will have the same handling and ride quality.

Everything will remain the same as long as you properly inflate your tires.