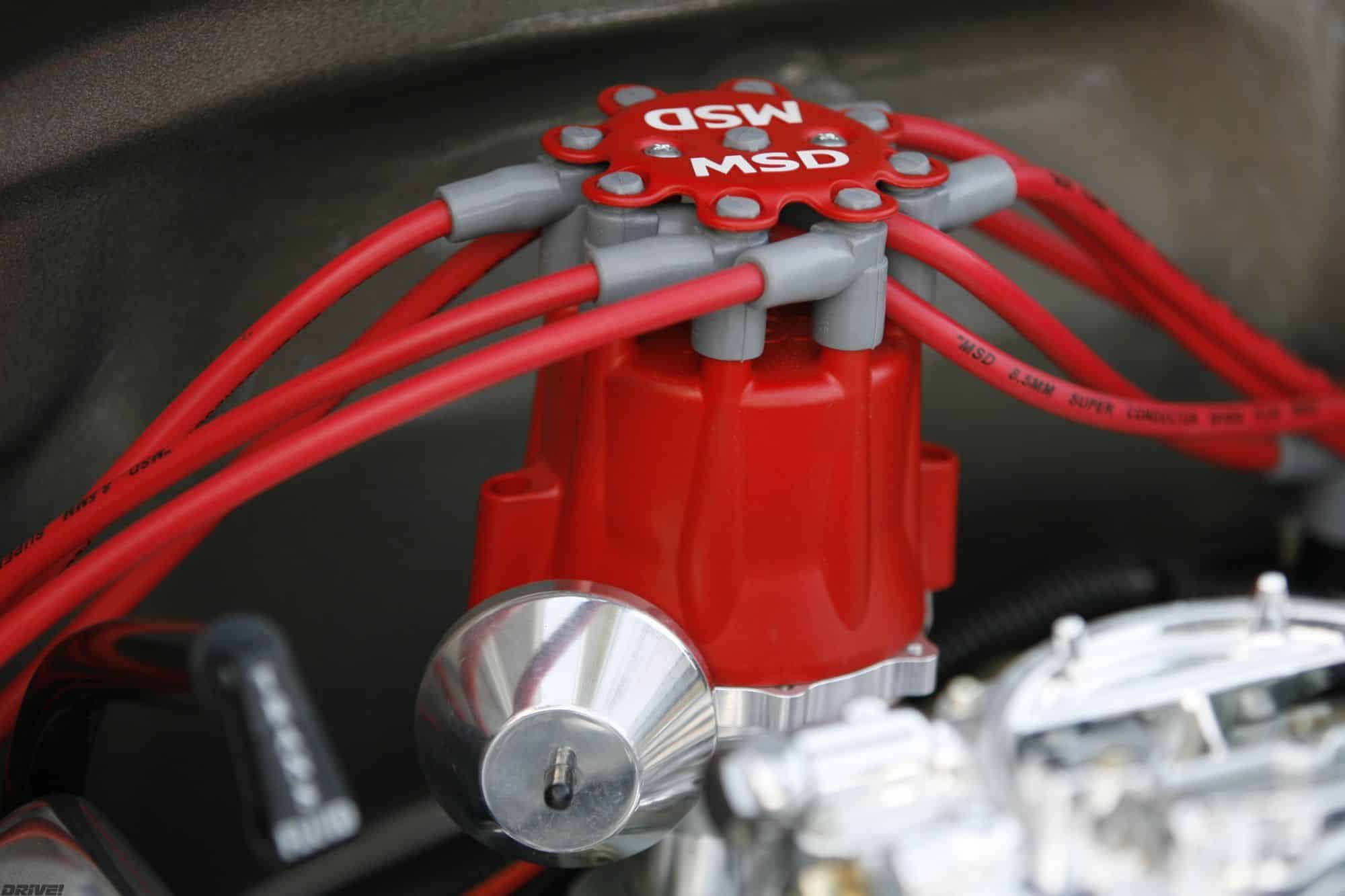 Firing order refers to the sequence through which spark plugs ignite the compressed air-fuel mixture in the cylinders. Most old-school Chevies have a firing order of 1-8-4-3-6-5-7-2.

Multi-cylinder engines have a predefined firing order, but why is it important? Firing order minimizes, if not eliminates, engine vibrations. It also enhances the engine’s stability and general performance.

Read on to learn about the firing order of Chevy small block and big block engines, including the importance of keeping a proper firing order.

What Is a Firing Order, and Why Is It Important?

As the name suggests, a firing order shows the sequence of when a spark plug fires. All multi-cylinder engines have a firing order and can’t run smoothly or perform efficiently if this sequence is not maintained.

An incorrect firing order will cause the engine to vibrate violently or may stall. You will have cases of misfiring and increased emissions.

The order of spark plug firing is crucial for the following reasons:

Your car’s engine can perform maximumly if the correct firing order is maintained. If not, the engine may misfire, leading to loss of power and general engine performance deterioration.

A misfiring engine also vibrates more violently. That reduces the driver and passenger’s comfort in the cabin. The engine’s lifespan is also significantly reduced.

Maintain Emissions Within the Acceptable Limit

An incorrect firing sequence will cause the sparks to ignite prematurely, and some may even misfire. This will lead to incomplete combustion of fuel. Consequently, there will be more emissions and low fuel economy.

The correct firing order ensures the spark plugs fire at the right time for maximum combustion and power efficiency.

If two adjacent spark plugs fire at once, there may be crossfire. The space between two spark plugs is usually too small.

So, the induced magnetic field from one firing spark plug can cause the next one to fire prematurely. That causes the engine to run rough and even misfire.

The adjacent spark plugs are crisscrossed to avoid crossfires. This helps to counteract the magnetic induction from the firing spark plugs.

The firing order is controlled differently on the engines with a coil-on-plug ignition system. Instead of crisscrossing the plugs, the car’s computer system determines the sequence.

The car’s computer relies on the data from the camshaft position sensor to determine when the piston is moving up during the compression stroke. It then sends signals to the spark plugs to fire just before the piston reaches the top dead center. It will follow the firing sequence defined by the algorithm in its memory.

Small-block Chevy engines are some of the most popular in the market. These were well-received by street drivers and racers due to their enormous power despite their size.

Read More:  What Does The Plus(+) And Minus(-) Mean In A Car [Paddle Shifters]

The spark plugs in a Chevy V8 engine are numbered from the front of the engine to the back. Spark plug #1 is the first on the front left, and #2 is on the front right. This sequence continues until you get to plug #8 on the right at the back of the engine.

The small block Chevy engine firing order of 1-8-4-3-6-5-7-2 is shared by different engines, including the following:

The Chevy 327 was one of the oldest engines fitted in cars manufactured from 1962 until 1969. During its last year of use, this engine came into the market as a full-size V8 model. That significantly reduces the cost over the previous 307 V8 fitted in the Chevelle, Nova, and Camaro.

Chevy 327 is one of the small block engines with the same firing order as all other engines in this category. If you have to set the firing order yourself, follow the 1-8-4-3-6-5-7-2 sequence.

The 5.3-liter Chevy engine is a relatively new model in the market. It features a different firing order from other small block engines, such as the Chevy 350 and Chevy 327.

The firing order of a 5.3-liter engine is 1-8-7-2-6-5-4-3. Its difference from others is the spark plug numbering. The odd cylinder numbers are on the driver’s side, while the even number cylinders are on the passenger side.

The Chevy 350 engines are small block 5.7-liter engines and one of the most widely used in cars. It first debuted in 1967 when a Camaro was released that came fitted with it. 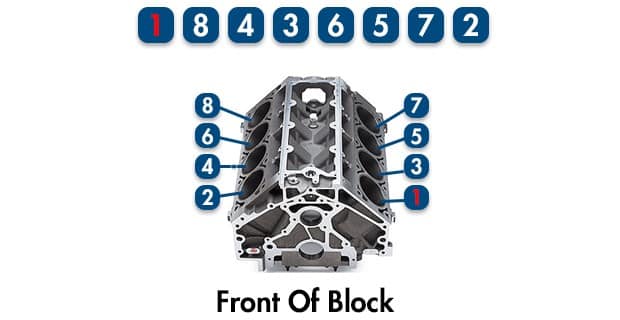 This is a big block V8 engine, where you cannot fire everything at once. The firing order should be 1-8-4-3-6-5-7-2 for maximum performance.

The cylinder numbering in Chevy 350 engines begins from the front to the back, starting from the driver’s side. Cylinder #1 is closest to the driver, and #2 is close to the passenger. They alternate as you move toward the rear, with #7 and #8 being the furthest from the driver and passenger.

The firing order of all Chevy big block engines is the same. These engine blocks were introduced to meet the demand for light-duty and heavy-duty trucks that needed more torque.

The firing sequence is quite similar to that of small block engines. It follows the 1-8-4-3-6-5-7-2 firing order, but there is a difference.

Big block Chevy engines feature an additional cylinder. The difference is in cylinder #3, which would be #2 in small block engines.

But like small block engines, the spark plug of big block Chevy engines should fire just before the piston reaches the top dead center. For that to happen, the distributor blade should align with the #1 spark plug contact in the distributor cover.

Read More:  How Long Can a Car Sit on a Flat Tire? [What Happens]

The Chevy 454 was introduced in 1970 as a 7.4-liter big block engine. It was first fitted in the Corvette LS-5 and gave out 390 horsepower. The later versions were improved and were capable of an output of 465 horsepower.

The Chevy 454 big block engine has the same firing order as the Chevy 350 small block engine. If you are wiring this engine, maintain a sequence of 1-8-4-3-6-5-7-2 for maximum performance.

Chevy engines also come in other forms besides the small-block or big-block engines. The diversity was to capture other applications.

We are not going deeper into all chevy engine types but will only mention the firing order of some common ones.

The high energy ignition (HEI) distributor cap is a relatively new technology that aids the transfer of electrical power from the ignition coil to the spark plugs.

Even with the HEI distributor cp technology, the firing remains unchanged. It follows the same 1-8-4-3-6-5-7-2 sequence as the Chevy 350 small block engine.

LS is an acronym for Luxury Sports. These small block engines were first fitted in the Chevrolet Corvette in 1997. It became one of the most successful engines in the company’s history.

The odd number of cylinders of the LS engines is on the driver’s side, and the odd numbers are on the passenger side. If standing directly opposite your vehicle, cylinder numbers 1 and 2 are the first two in front, and 7 and 8 are the last two cylinders on the rear end.

The Chevy V8 marine engines also have a firing order, just like engines in cars and trucks. But depending on the purpose of the engine, the firing sequence can vary.

If a boat has a twin inboard engine, one rotates in the opposite direction, offsetting the other. This arrangement ensures stability.

Engines with a reversed rotation change the valve timing to allow it to change the direction of rotation. Such Chevy marine engines have a firing order of 1-2-7-5-6-3-4-8.

As you can see, it is the reverse order of the spark plug firing sequence of a small block Chevy 350 engine, which is 1-8-4-3-6-5-7-2. That means the Chevy marine V8 engine with the normal rotation has the same firing order as Chevy 350.

How do you find the number 1 on a distributor cap?

If the distributor cap is not labeled, you should still find the number 1 by following a few steps. The piston in the #1 cylinder comes up two times during a combustion cycle: during the exhaust and compression strokes.

Turn the flywheel until this piston reaches the top dead center during the compression cycle. The rotor button should point to the #1 position on the distributor cap.

Why does it backfire when I connect the wire to number 1?

The backfiring means you have not connected the spark plug wires correctly. That happens when you follow the cylinder numbering described in the manual, which does not count for the seating orientation when the driver’s seat is on the right side instead of the left. Count on this difference before connecting the wires.

Are all SBC firing orders the same?

What if the firing order of a chevy 350 is wrong?

A wrong firing order in any engine reduces its performance. There will be more vibrations, reduced fuel economy, and increased emissions. It will likely misfire. Always ensure you have the right connections to the spark plug wires for maximum efficiency.

Does firing order change the sound?

Not necessarily. An incorrect firing order does not change the sound of your engine. However, the vibrations caused can trigger other engine components to let off unpleasant noise when the engine is running.

Can a V8 fire two cylinders at the same time?

Why is the spark plug fired before TDC?

The air-fuel mixture takes time to burn. That is why the ignition happens before the piston reaches the top dead center (TDC). This is called spark advance, which ensures complete fuel combustion.

No. Retarding timing will not necessarily give you more power. It is only beneficial in turbo/supercharged engines because it compensates for the denser air and fuel mixture. It will allow them to run more efficiently.

All LS small-block Chevy engines have the same firing order of 1-8-7-2-6-5-4-3. And special application engines, such as those with reversed rotation for marine applications, have a firing sequence of 1-2-7-5-6-3-4-8.

Regardless of the engine type, firing order is crucial and should be maintained when wiring spark plugs and the distributor cap. Incorrect sequence reduces engine performance and lowers fuel economy. There is also a problem of increased emissions.