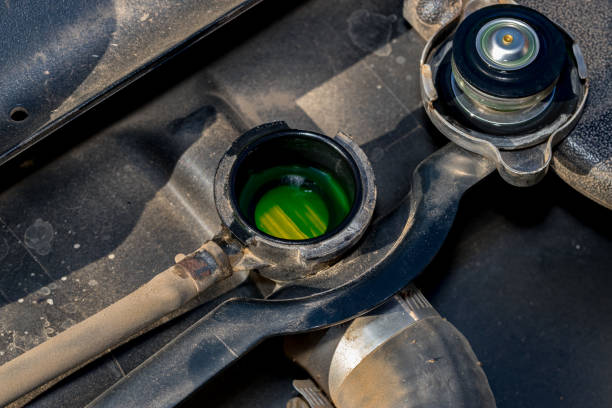 The head gasket is a seal to the engine block and the cylinder head. A faulty head gasket may cause the coolant reservoir to boiling, white smoke from the tailpipe to appear, or an overheated engine.

When the hot coolant goes to the radiator, the fan releases the excess heat into the atmosphere. As it becomes faulty, it won’t be able to release enough excess heat and may cause the coolant to boil.

The thermostat monitors coolant temperature and regulates the coolant that flows into the engine. Thus, when the engine is cold, its bypass valve remains open.

But as the coolant absorbs the heat as it gets into the engine, this will cause the bypass valve to close, and the main valve will open. A faulty thermostat may cause an imbalance as the valve may not open properly, thus creating an imbalance with the mechanism of the coolant to absorb heat from the engine.

As months or years go by, it may lose its optimal function of absorbing the heat from the engine. The car mileage may indicate the boiling coolant issue. Using the first-ever coolant, you have beyond 60,000 miles or beyond 30,000 miles after you replace the first coolant, which can lead to a coolant reservoir boiling.

One of the ways to fix the coolant reservoir boiling is to flush the coolant fluid. This is recommended for new cars if the coolant is never replaced when the mileage is 60,000 miles.

In this video, it guides us on a step-by-step on how we can fix the boiling coolant reservoir issue:

10Add the anti-rust and sealer additive and close the reservoir

When Should I Replace A Coolant Reservoir?

It’s time to replace a coolant reservoir is by checking the following:

What If The Coolant Reservoir Is Empty?

Without the coolant in the coolant reservoir, the cooling system won’t be able to absorb the heat coming from the engine. Thus, the engine will overheat.

How Is Antifreeze Made?

Ethylene (gas) and water are both colorless, so the color of the antifreeze is from dye formulation.