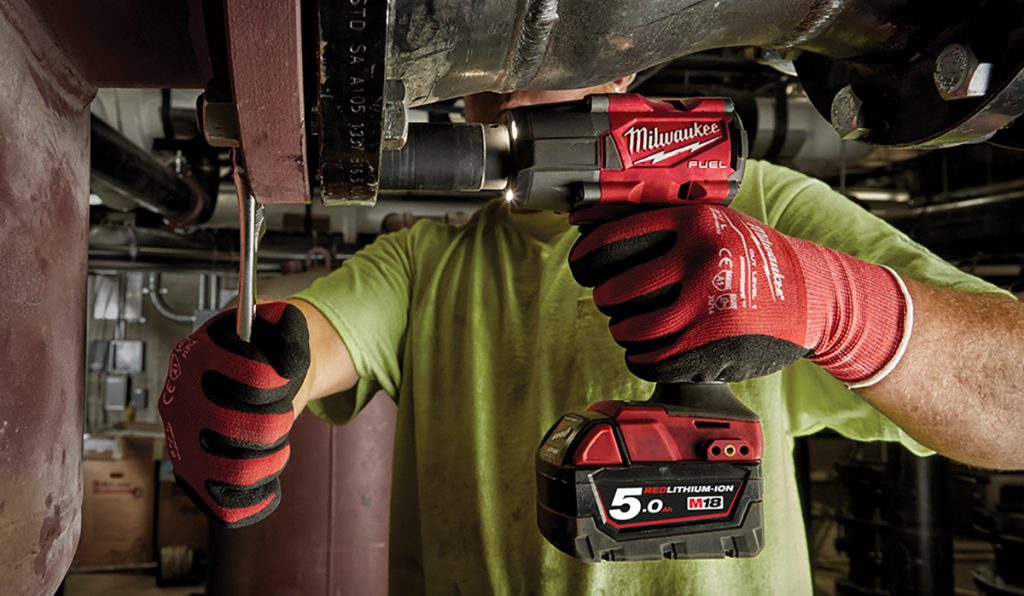 A wrench is a versatile tool – all mechanics and handymen know that. It is used to help turn objects such as nuts, bolts, and fasteners; sometimes with pressure and torque for those tightly wounded ones.

However, for this post, we will focus on the last two types mentioned – the air impact wrench and the electric impact wrench. Both of these, however, are types of an Impact Wrenches.

What is an Impact Wrench?

This is the component that helps the user to fasten or remove bolts and nuts without breaking them.

What will you get?

The impact wrench is compact in design, measuring only 5.70”, and lightweight, specifically weighing only 3.4lbs. More so, its grip comes with a textured anti-slip feature.

It has a hog ring anvil so you can easily swap sockets. Also, it is designed with 3 LED lights.

Q: What is the max torque that it can deliver?

Q: Does it come with batteries and charger?

Q: Is its motor brushed or brushless?

A: This tool comes with a brushed motor.

Our Take on the DEWALT DCF880HM2 Impact Wrench Kit

DeWalt DCF880HM2 is a great buy considering that it’s already a kit complete with batteries and a charger.

The impact wrench per se is also a great tool that’s comfortable to use. Weighing only around 3 pounds, it wouldn’t easily tire your hand and arm. Also, it is designed with a textured anti-slip grip that further provides comfort for you.

More so, even the batteries can work with you through long hours because they are XR lithium-ion models that come with a fuel gauge and store 33% more power compared to standard battery packs.

By delivering 150ft/lbs of maximum torque, this tool is ideal for driving and removing fasteners in wood, metal, or concrete. You may also use it for fastening or loosening nuts and bolts.

What will you get?

Ingersoll-Rand 231C is an air impact wrench designed with a ½-inch drive socket. It is engineered with a twin-hammer impact mechanism that produces a maximum torque of 600 ft/lbs. It also runs at an impressive speed that can produce 8000RM and 1200BPM.

This tool is ergonomic, portable, and lightweight, weighing only 5.8lbs. Yet, you can instantly feel that the material used is durable and sturdy. It is bought as ‘ready-to-use’ and arrives fully lubricated.

Q: Where was this tool manufactured?

A: This air impact from Ingersoll-Rand was made in China.

Q: How much noise does this tool produce exactly?

A: The output sound is at 99dB, which is still within the human threshold.

Q: Is its motor brushed or brushless?

A: This tool is built with a brushed motor.

Ingersoll-Rand 231C air impact wrench is a fairly powerful tool that will help you get the job done with its 600 ft/lbs max torque.

Its speed of 8000RPM and 1200BPM is also fairly impressive. As such, it can be used for light to mid-range tasks but not for heavy-duty ones.

More so, its build may exceed your expectation considering that it was manufactured in China.

It’s remarkably solid, sturdy, and durable. It can withstand accidental drops to the ground in case it slipped your grip.

One of the downsides, however, is that this tool needs to be lubricated frequently in order to function efficiently. This is one aspect that most users tend to overlook but this instruction is indicated in the manual.

Another point is that it produces 99dB of noise, which is loud in fact. But, such sound, although loud for a tool, is not a matter of major concern since it’s not too loud that will damage your ear. Don’t worry; it is still within the human threshold.

As mentioned above, both products we presented above are impact wrenches. Primarily, they just differ in power source; as such, one is electric while the other one is air.

A corded electric impact wrench is usually designed for heavy-duty tasks – to loosen or remove larger screws, bolts, and other big objects.

It has an electric cable attached to its operating system and needs to be plugged in directly to a power outlet. Although more useful for bigger and more difficult tasks, a corded electric impact wrench is limited in portability.

You would always need to find a power outlet or bring an extension cord with you every time to make sure that it could reach the bolt you want to remove.

A cordless impact wrench, on the other hand, is usually smaller, lighter, and more portable since it is powered only by a rechargeable battery.

The first product we presented above, DEWALT DCF880HM2 is a great example of such. It is very handy and ideal to use in tight corners and spaces.

However, the main downside is that it can’t produce as much torque as an air impact wrench can.

Moving forward, an air impact wrench is powered by an air source, usually an air compressor. As such, the number of hours and the amount of torque that your impact wrench can perform and deliver primarily depends on the supply of air from your compressor.

Since you’re using two tools, technically, it’s not ideal for traveling and emergency repairs. Rather, it’s great when you’re using it in a stationary location.

Also, some users claim that an air impact wrench is quite harder to set and control because it does not come with a variable speed trigger.

However, with some practice and familiarity with your air impact wrench and air compressor, you would be able to control it more.

Now that we’ve differentiated the two types of impact wrenches we have here, let’s compare the products we presented.

As you may have observed already, DeWalt DCF880HM2 is a cordless electric impact wrench while the Ingersoll-Rand 231C is an air impact wrench.

When it comes to design and build, both tools are found to be of great quality – sturdy and durable. Both of them are also lightweight.

Read More:  Ridgid Vs Milwaukee Cordless Drill [What You Need to Know!]

However, DeWalt DCF880HM2 is significantly lighter as it weighs only 3.4lbs while Ingersoll-Rand 231C weighs 5.8lbs.

Ingersoll-Rand 231C also boasts of its twin-hammer impact mechanism making it a great tool even for heavy-duty tasks.

On the other hand, DeWalt DCF880HM2 boasts features that will help you work more comfortably and efficiently.

As such, it is designed with a textured anti-slip grip for better hold and 3 LED work lights with a 20-second delay after you release the trigger. Such features you won’t find in Ingersoll-Rand 231C.

Now that we’ve differentiated an electric (cordless) impact wrench and an air impact wrench, it’s actually hard, or even impossible, to determine which one’s better. Certainly, there are aspects that will make one better than the other.

However, such torque is also quite difficult to control for a beginner because of the lack of variable speed triggers.

The cordless electric impact wrench, on the other hand, is more advantageous when it comes to portability.

It’s smaller and lighter and even wonderfully designed for comfort and dark spaces – such features you won’t find with the air impact wrench.

As such, choosing between the two primarily depends on the type of tasks that you intend to do. If you are working on a heavy-duty task and more in a stationary spot, then the Ingersoll-Rand 231C is the tool to buy.

On the other hand, if the impact wrench is for light and infrequent use, then you could easily opt for the DeWalt DCF880HM2.