The 6.0 power stroke is a turbo diesel engine made by Navistar International for heavy-duty applications. The 6.0 Powerstroke firing order was optimized to increase torque output compared to horsepower.

The firing order produced high torque at low RPMs which was made possible with a big displacement of 6.0L and a special turbo made by Garrett.

The 6.0 Powerstroke firing order was unique because of the piston numbering done by Ford. From the front to the back, the left side had an odd number of pistons, and the right had an even number of pistons. 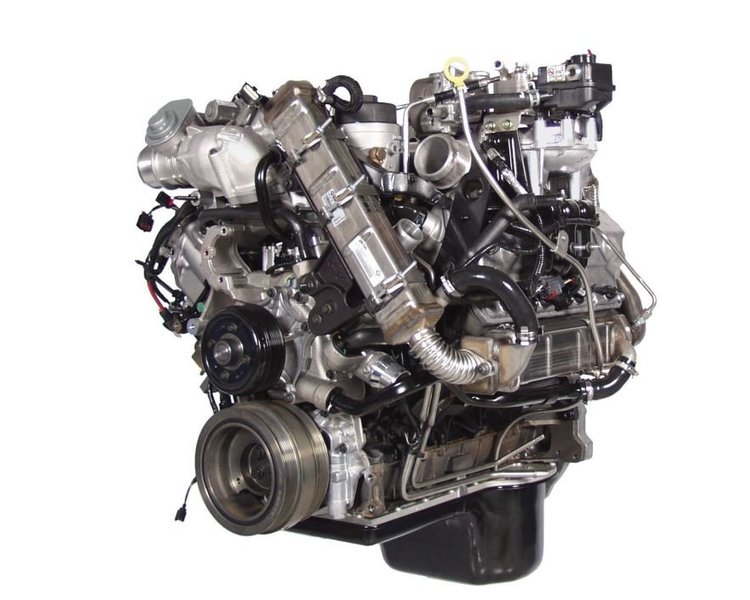 The 6.0 Powerstroke is a turbo diesel V8 engine made for heavy-duty trucks and buses. It was widely used in school buses, vans and trucks.

It was in production from 2003-2016 and was replaced by the 6.4 Powerstroke also made by Navistar.

It was made to compete with the  Cummins B-series and the Mercedes-Benz MBE900 diesel engines widely used in the trucks and buses of the transport and transit system.

The 6.0 Powerstroke was officially known as the Navistar VT365. 365 was named due to the engine size of 365 cubic inches.

It came with an optional TorqShift 5-speed transmission in Ford trucks. It was a pushrod V8, with fuel injection. It had 4 valves per cylinder, 32 valves in total and the fuel cutoff was placed on 4200 RPMs.

The engine was used exclusively in all the buses, vans, trucks, and every other heavy-duty vehicle made by Ford.

The 6.0 Powerstroke replaced the 7.3L engine made also by Navistar from 1994-2003. They were manufactured and produced in the Alabama factory.

The majority of the engines were made in the Indianapolis and Hunstville plant. Halfway through the production, it was predicted that a total of 2 million engines were gonna be made. But the numbers were much smaller than that because of all the problems surrounding the engine.

The engines, later on, were made in the Ford’s Chihuahua engine plant in Mexico.

What Is The Ford Diesel 6.0 Powerstroke Cylinder Numbers And Firing Order? 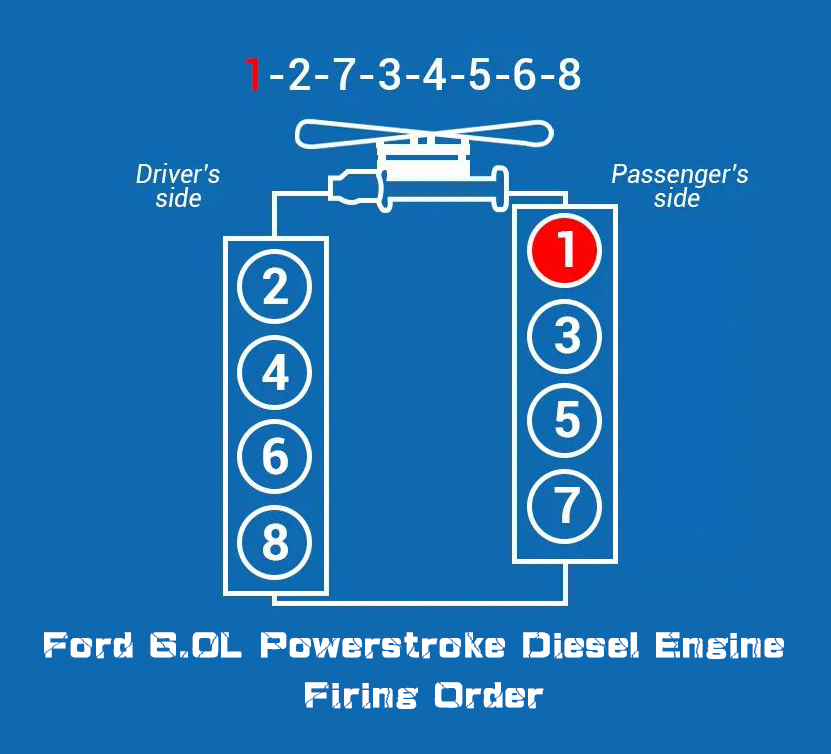 To understand the firing order, let us deduce the piston(cylinder) numbering. As you already know, ford labels the first left cylinder as no.1. On the left side, we have the odd number of cylinders; 1,3,5, and 7. The right side has even numbers 2,4,6,8.

The firing order is special because of the turbo used in the 6.0 Powerstroke. A variable-geometry turbo provides torque at low RPMs and it’s made possible through the firing order.

The engine itself is low compression and the compression is increased with forced induction to 18:1 with the help of a turbo. The firing order makes it possible for the engine to produce power off the boost and on the boost.

Read More:  Can Spark Plugs Cause Overheating? [All You Need to Know]

What Makes The 6.0 Powerstroke Special? 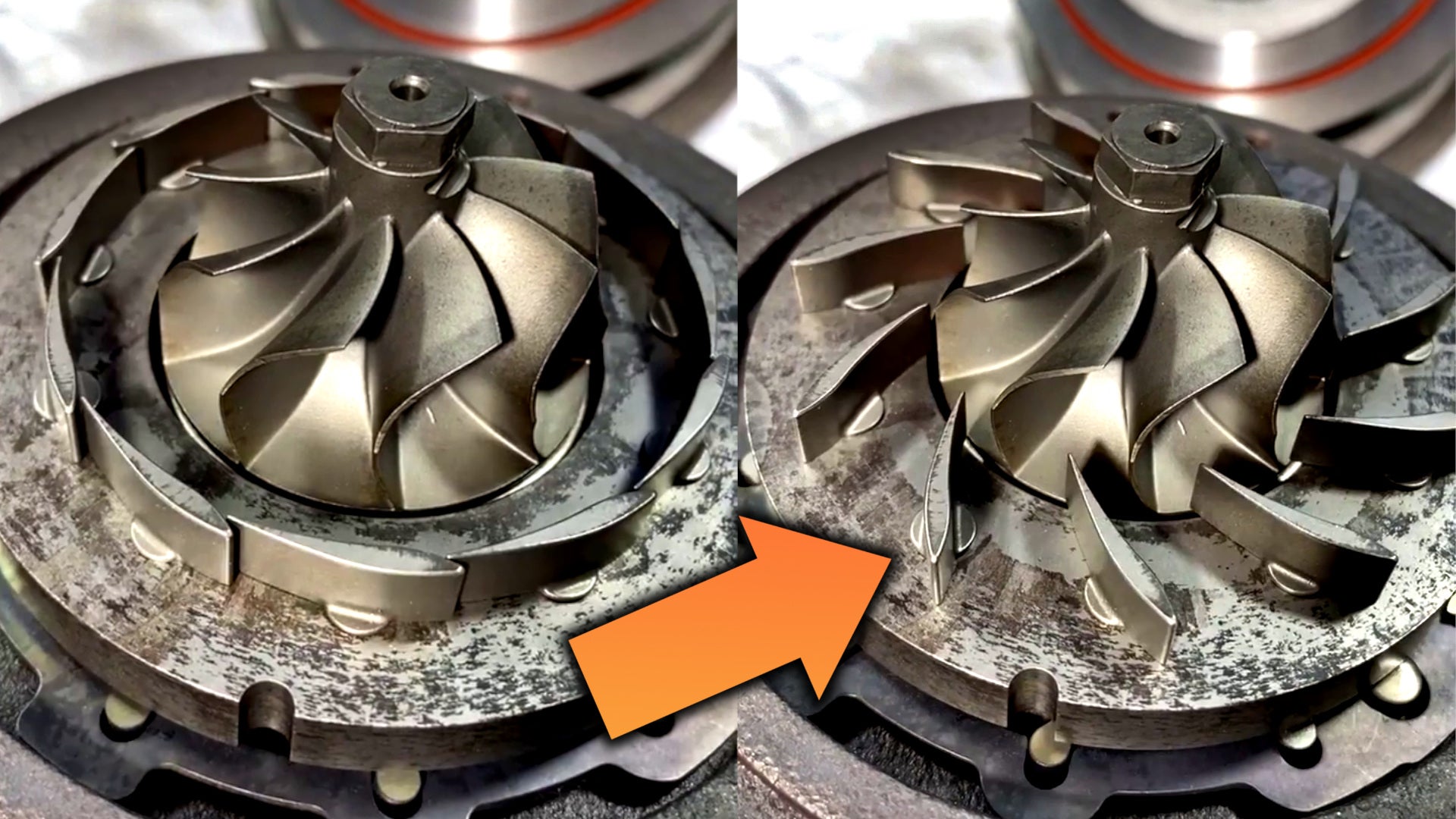 The VT365 had a special turbo that had a variable geometry. A variable-geometry turbocharger has fins on the intake or cold side of the turbo which change circumference depending on the RPM.

This changing geometry of the turbo lowers the boost threshold. This means a boost is available from a lower RPM, meaning less turbo lag.

The engine has a compact iron graphite block and an iron-aluminum alloy head. 4 valves per cylinder, 32 in total, smaller bore, and bigger stroke paired with the displacement meant high torque at low RPMs.

Direct injection sprays fuel into the combustion chamber as the piston is going down during the intake stroke. This allows the fuel to mix with the air properly and results in better thermal efficiency.

Problems With The 6.0 Powerstroke 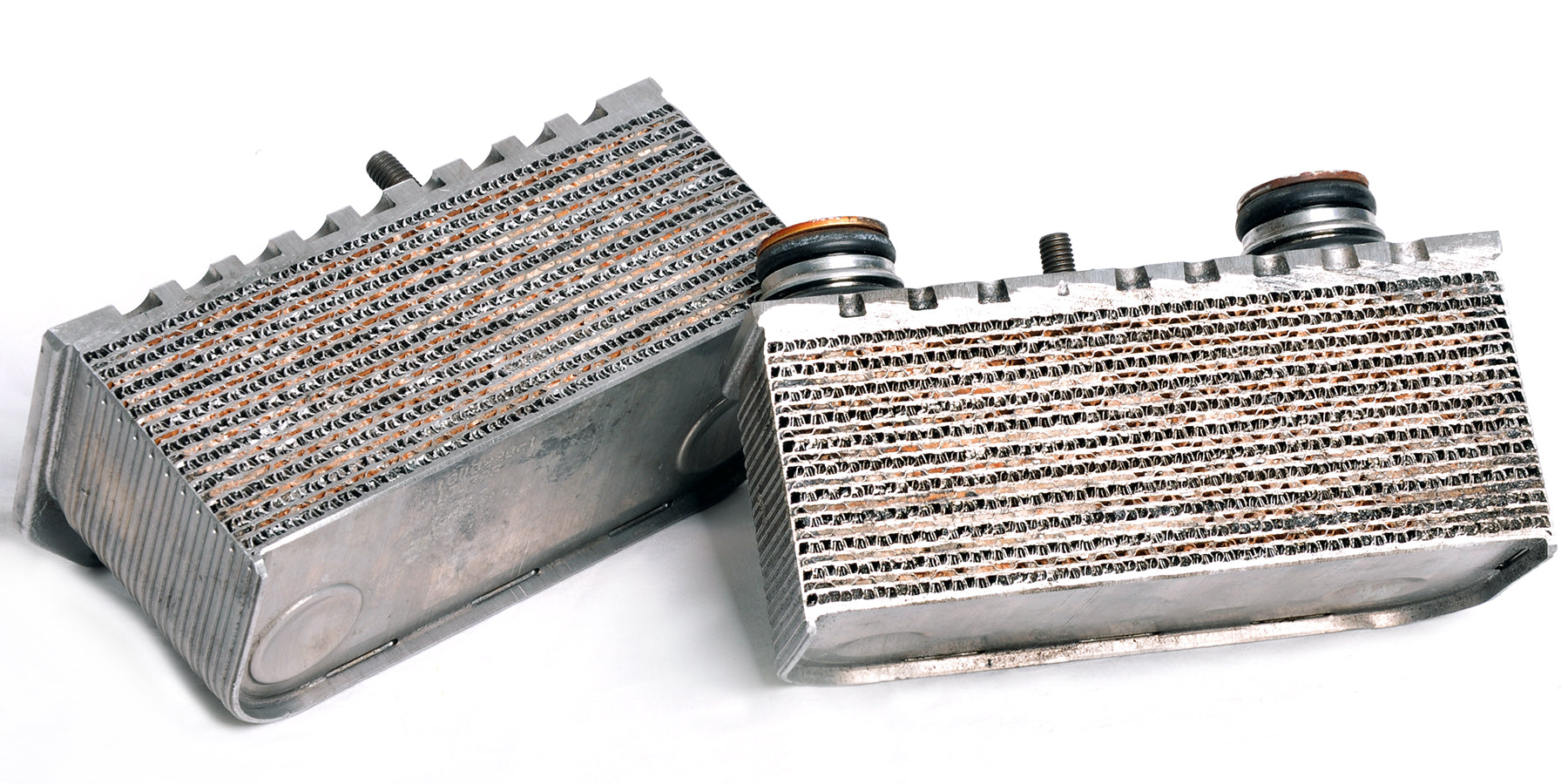 The problems with the 6.0 Powerstroke lay in the in-block oil cooler and the materials of the EGR (Exhaust Gas Recirculation) cooler.

The oil cooler was located in the base of the engine block beneath the cartridge oil filter setup. The outer portion of the oil cooler is submerged in oil with the coolant flowing through the centre passages.

This reduced flow would cause thermal expansion which fatigued the heat-exchanging cores. This would cause premature failure over time and make the EGR coolers prone to failure. 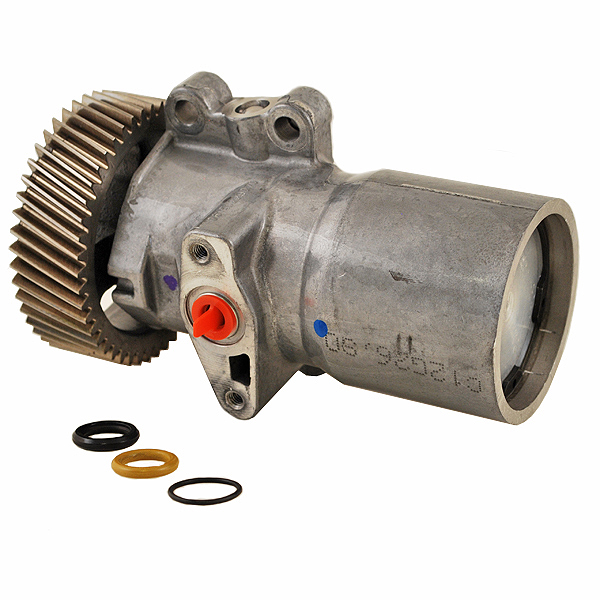 The split-shot HEUI (Hydraulic-Electronic Unit injector) fuel injectors required oil pressure to be pressurized. Due to the use of poor-quality materials, the HPOP was well known to fail early. The oil in HPOP was pressurized by a gear driven by the rear camshaft.

The early model HPOP gears would reportedly get stress cracks in the teeth because they were weak and break. This would cause the engine to not start up.

The ICP (Injection Control Pressure) sensor was located on top of the HPOP cover. The heat from the HPOP would cause failure in the ICP sensor to fail which would keep the engine from starting.

Ford addressed these problems in 2004 when the engine had an upgrade and in 2006. They relocated the ICP and the HPOP. It still caused problems of its own such as leakage and other failures and went on unaddressed till the end with minor changes to address them.

These minor changes didn’t fix the problem completely but they reduced the effects of failure from catastrophic to just being troublesome and then eventual failure.

Torque To Yield (TTY) head gaskets was used by Ford for the 6.0 and 6.4 Powerstroke. There were 4 bolts used to clamp shut the head and the bolts were tightened to a certain torque spec. High boost/loads would cause the bolts to stretch beyond their limit. This would also be caused by increased cylinder pressure due to coolant being introduced into the combustion.

Read More:  How To Identify Positive And Negative Speaker Wires With Multimeter

Coolant introduction into the combustion chamber was a result of oil cooler/EGR cooler failure, which was a common preexisting problem.

Some aftermarket fixes included changing the bolts with head studs but the underlying problem would still exist. This caused the cylinder head to become warped or cracked.

Ford never addressed this problem directly because this would only occur in the failure of another component or due to aftermarket modifications increasing the load on the cylinder head.

The 6.0 Powerstroke engine had a low-output alternator which resulted in failing batteries. Due to this problem, the FICM (Fuel Injection Control Module) would fail.

Furthermore, the FICM was mounted on top of the engine, exposing it to extreme temperatures and vibrations. This would break the solder joints and components would fail, mostly in the power supply. This was a problem in early models.

Voltage in the fuel injectors is multiplied from 12V to 48-50V by the FICM. Low voltage would cause injector failure or even damage to the injectors.

6.0 Powerstroke Vs Its Competitors

6.0 Powerstroke was always competing against other engines due to its applications. It was used in heavy-duty vehicles and trucks. These vehicles were produced by several companies such as Mercedes and Volvo.

Let’s see some of the competitors of the 6.0 Powerstroke and how it performed against them.

The 6.0 Powerstroke was the engine that replaced the 7.3L V8 already in use by Ford. The 7.3L was also made by Navistar (engine code: T444E) and was used in heavy-duty vehicles.

It was with this engine Navistar introduced HPOP and HEUI (Hydraulic-Electronic Unit injector) fuel injectors.

The highest power figure from the 7.3L was 275hp and 525 lb-ft of torque. It used a fixed geometry turbo. It was not emission compliant but it was really basic, reliable and considered bulletproof.

Here is a complete comparison of different spec figures of both engines:

Here are the pros and cons of both engines side by side.

Read More:  How Much Frame Rust Is Too Much? [An In-depth Analysis]

According to auto-abc.eu, the 6.0 Powerstroke in Ford Excursions gets 13 liters per 100km (7.7 km/l) in urban and highway combined.

According to fueleconomy the 7.3L Powerstroke got a fuel economy of 7.1gal/100mi.

The 5.9L Cummins engine started off being used in agricultural vehicles but started being put in Dodge pickup trucks in 1989.

The first generation was a 5.9L inline-6 with 12 valves. It was offered in petrol but the turbo diesel was the desired one.

The third-generation turbo diesel was the competitor of the 6.0L Powerstroke. The 3rd generation 5.9L Cummins had 24 valves, and a bosch CP3 high-pressure injection pump fuel rail system.

It improved fuel efficiency and bumped up the power to 305 horsepower and 555 lb-ft of torque.

Here is the specs comparison

According to fueleconomy.gov the 5.9L cummins got a fuel economy of 7.1gals/100mi.

It provided high tow capacity and was successful in its various applications whether it be school buses, vans, heavy-duty trucks, or just highway trucks.

If the maintenance of the engine was left unattended even for some time, the engine would get damaged catastrophically and would require a complete rebuild.

There were several parts of the engine that were prone to failure and would give the engine a really bad reputation for being unreliable.

There were several recalls and Ford paid over $2 million in damages and legal fees throughout the engine’s run.