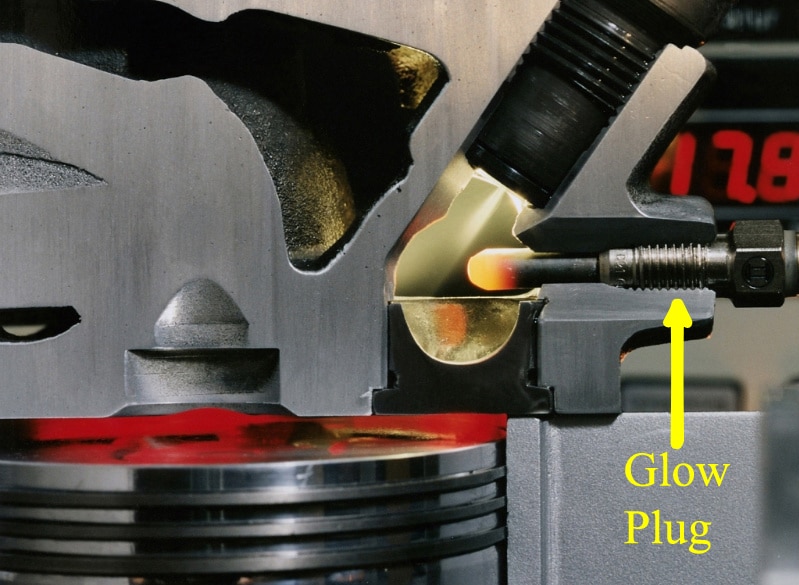 Glow plugs are usually found in Diesel engines. It serves as miniature heaters with a similar function as spark plugs in gasoline engines. Additionally, it helps with fuel ignition.

Diesel engines do not necessarily need the glow plug all the time. In warmer environments, the air compression system in diesel engines is enough for fuel combustion.

Normally, in cooler climates, the engines may have a difficult time, and that is where glow plugs come into play.

A glow plug, at its core, begins as a heating coil that is integrated into a metal tube. It has a special insulating powder that surrounds it as well.

Once electricity runs through it, the end of the glow plug can reach temperatures up to 1000 degrees celsius.

There is a variety of glow plugs to choose from. Choosing the right fit for you depends on your vehicle’s model and make. These types of glow plugs can not be substituted for one another.

There is also a ceramic glow plug with two different types on its own. The main difference between these types of glow plugs is the capacity for maximum voltage and temperatures.

How to Choose the right Glow Plug

Unlike spark plugs in gas engines, a diesel engine only requires one glow plug per engine cylinder.

There’s a good rule to follow when choosing the right glow plug type. The hotter climate and higher nitric content should be partnered with a colder plug.

If the climate is colder and has a lower nitric content, a hotter plug should be used.

Of course, it would be better to check the car manual or have a professional look at it. If that is not available and you’ll do it yourself, the rule above should be followed.

What are the signs of faulty glow plugs?

When the glow plugs aren’t functioning properly, there will be increased difficulty driving the vehicle.

Being familiar with the symptoms of faulty glow plugs is important to cut down on time spent searching for the engine’s problem.

The most obvious sign of glow plug problems is that there will be difficulty starting. If the fuel system or battery is properly working, the cause is most likely the plugs.

Modern car models will have a light on the dash to signal if the glow plugs need changing.

Another problem is that you may experience an engine misfire while driving. White smoke from the exhaust is also a good indicator of glow plug disfunction.

When should I change my glow plugs?

It all depends on how much you use your vehicle. Most glow plugs can last from 100,000 to 200,000 miles. This can also depend on the road conditions and the elevation gains.

Replacing glow plugs can be easily done and is easy to learn. Make sure to check the manual or consult with a mechanic before planning to do it yourself.

Remember to always change the glow plugs altogether in order to maintain all the plugs being the same age.

How much is it to have my glow plugs replaced?

Glow plugs tend to cost around $50 to $100. So, it depends on how many glow plugs your vehicle’s engine needs.