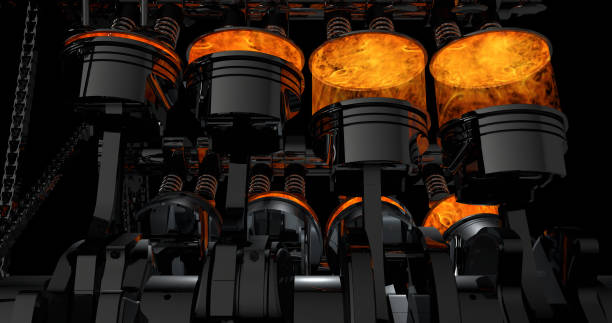 Fuel ignition is heavily reliant on compression and the ideal gas law. Pistons compress the air in the cylinder, putting it under immense pressure, and making it very hot.

Next, the injectors make the diesel into small particles and spray them as mist into the hot air compressed by the pistons.

Since fuel is flammable, the diesel particles ignite, which starts the engine ignition.

This article will cover the process of how diesel is ignited inside the engines and the possible mishaps that may happen.

How A Diesel Engine Works

The video hits off with a disclaimer that the operating principles for diesel cars generally work for all types of diesel engines, such as pickup trucks and heavy-duty trucks.

Generally, the process starts with clean air being brought into the engine’s cylinders. This is to state the difference between gasoline engines, in which fuel-air mixtures are being drawn in the engine.

The moving pistons naturally apply pressure to the air, heating it up in the process.

When the fuel hits the highest possible point in the cylinder, fuel is injected into the highly compressed air through a series of complex tiny holes.

This would lead the fuel to ignition due to the high temperatures in the engine.

What ignites the fuel in the diesel engine?

Some people refer to diesel engines as compression-ignition engines. This is because of the process of how the fuel ignites with the exhaust rather than through small sparks of electricity.

Read More:  Do All Cars Have Spark Plugs? [Here Is Why]

The fuel is ignited through the highly compressed air when the injectors spray small diesel particles onto it.

This causes the diesel to light up because of the insanely high temperature in the piston caused by the immense amount of pressure delivered to the air.

Can a diesel engine self-ignite?

A critical aspect of internal combustion engines is the self-ignition process of air mixtures such as hydrocarbons.

A diesel engine can use this self-ignition process to light up the vaporized fuel that is mixed with air in the engine to start the combustion process.

The piston compresses the air in the cylinder, causing it to be very hot. Generally, the injectors then atomize the diesel, and a mist of it is sprayed towards the hot metal cylinder.

Once it reaches the fuel’s ignition point, it gets lit up by the hot air inside the cylinder in the engine.

Is diesel fuel easy to ignite?

Fortunately, no. Diesel has a less explosive nature than gasoline and, as such, is seldomly ignited through fire. It would be highly improper and improbable to light up a diesel engine with fire.

Additionally, diesel fuel ignites at temperatures around 52 to 82 degrees celsius. Although, any liquid fuel’s flashpoint can easily change due to the pressure and the temperature of the air around it. If it is only room temperature, the previous data still stands.

What are pistons inside the engine for?

Pistons are the small components in the engine that slide up and down inside the engine’s cylinders.

Their main work lies in that specific movement as it compresses the air in the chamber and heats it due to the amount of pressure it brings.

Afterward, the air volume that enters the chamber is magnified to around 14-25 times that from the start.