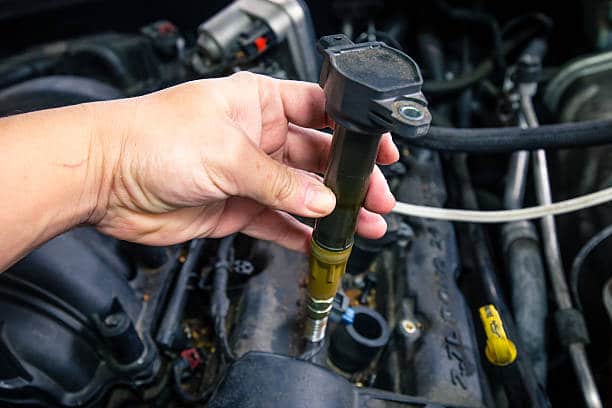 Ignition coils are always matched to the number of spark plugs. For a V4 engine, you can expect it to have four spark plugs thus the reason it also has 4 ignition coils.

Some engines are also twin spark engines. This means that each cylinder has two sparkplugs. For such a scenario, you can have up to 8 ignition coils and sparkplugs too.

Newer vehicles right now come with coil packs instead of a distributor. Having coil packs improved immensely how power would be delivered to the spark plugs. That is why more car brands switched to coil packs.

The ignition coil has been used to mean a single coil while coil pack means a combination of two or more coils in a car engine.

The term ignition coil was first used when most of the cars at the time would use only one ignition coil wired to a distributor. However, that changed in the era of computerized engines where multiple coils were introduced.

With coil packs introduced, we can now see the end of single coils used with a distributor. As a result, you can expect each engine configuration to potentially have multiple coils that aid in improved distribution of power to the spark plugs for improved efficiency.

Depending on the engine type, you may have to consider any of the following as part of the common types of ignition coils and how they work.

This is one of the oldest forms of the ignition coil. For this one, it is destined to have a distributor cap where current flows through it to the spark plugs. This happens so fast, making it good for your engine to start and run.

This type of ignition coil had a few downsides including the ignition points breaking down after a while. This would change the spark timing and make the engine run rough.

This one might work as the conventional coil, but instead, it has an electronic system for running the coil pack. It is found to be more effective and lasts longer than the conventional model.

One of its biggest downsides is that it would stop after 130,000 miles. This would mean the need for having it repaired.

This is probably another common type of ignition coil. In this case, you will find that each plug will have its own single coil. This is quite a powerful system as it can generate as high as 50,000 volts. As a result, you end up with a stronger and hotter spark.

The ignition coil performs an important role in the performance of your car. In case it has a problem, then the car would not work as well. Here is how to know if your ignition coil has a few problems.

Read More:  How Many Spark Plugs in 4 Cylinder? [By Size of the Engine]

Backfiring is a common way of knowing there is a problem with your ignition coil. This is because there is unused fuel that would be leaving through the exhaust pipe.

Having poor fuel economy can also be a reason. With an ignition coil failure, it means that some fuel is not being used correctly.

Engine misfiring can make the car jerky and sometimes make it spit. This means there is a problem with one of the coils. You may also experience too much vibration during idle.

A vehicle may also stall since there are irregular sparks being sent to the engine. Ensure to have the coils checked just to be sure.

What is the cost of replacing an ignition coil?

How can you test a spark plug?

It is advisable to use a spark plug tester tool rather than trying to unplug a plug wire when the car is running.

Is it possible to drive a car on a bad ignition coil?

It may depend on the extent of the damage. If you notice the car is running too rough, just have the ignition coil replaced before you damage anything else.