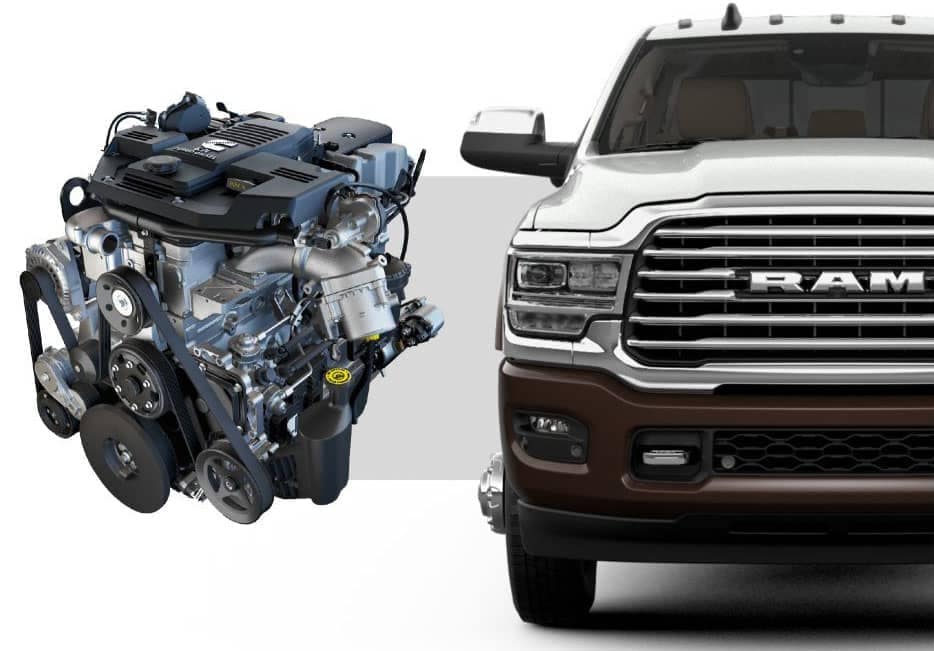 Vaclav Smil said it’s “impossible to reach the extent of globalization that now defines the modern economy” without diesel engines. Indeed, diesel engines have become an economical and safer alternative to gasoline engines, but what do we know about them?

You may know that diesel engines don’t require spark plugs, but do you know why?

Most people don’t realize that diesel engines don’t require spark plugs because the compression ignites the fuel. However, that sentence can be hard to understand without some explanation.

In this post, we want to ensure you have all the information you need to keep your diesel running smoothly. Continue reading to learn more about when and how many spark  plugs you’ll need for your diesel engine.

What Is a Spark Plug? 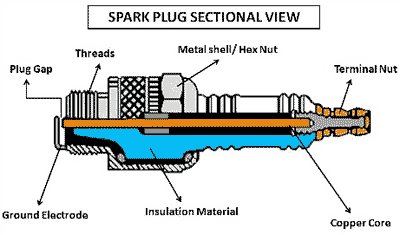 Spark plugs are an important component of any gasoline-powered engine. Copper/nickel, iridium, single platinum, double platinum, and silver are the most common types of spark plugs. However, the best spark plug for your car varies depending on your manufacturer.

In most vehicles run on gasoline, one spark plug is used for each cylinder. For example, if you possess a six-cylinder car, its engine will have six spark plugs

The engine is programmed to ignite each spark plug in a specific order, providing an electric spark to your engine. It then ignites a fuel-air mixture, resulting in a tiny explosion inside the engine’s valves.

Thus, the explosion compresses the piston in your engine, generating energy and propelling your vehicle ahead. That’s basically how your car runs.

When a spark plug fails, it can no longer generate enough spark to start the engine. That is why it is critical to change your spark plugs at least every 100,000 miles.

Additionally, when a spark plug wears out or is damaged, the engine’s corresponding cylinder will not fire. It not only damages your engine, but it also means your car won’t start or won’t start safely.

A Diesel Uses Glow Plugs Instead

Diesel engines use a different type of fuel than gasoline, so their operation is a little different. That means the parts involved in starting your diesel engine are also different.

In addition, diesel engines generate energy differently than gasoline engines. They don’t need a spark. Instead, they depend on the heat generated by a glow plug.

A glow plug is a type of heating instrument in your car. It ignites the fuel/air mixture in the engine’s pistons like a spark plug.

Also, a glow plug and a spark plug have something in common. You can see one glow plug mounted on the top of each cylinder in your diesel engine.

The narrator differentiates between diesel and petrol (or gasoline) engines in the video. Although they work on the same 4-stroke cycle, they differ on the self-ignition temperature.

Also, the self-ignition temperature has something to do with spark plugs and glow plugs. It’s the temperature where the air and fuel mixture will ignite without a spark plug and solely rely on compression.

The narrator also noted other notable differences between the two engines. These are:

What is a Glow Plug, and How Does it Work?

Glow plugs have three distinct purposes. First, its main purpose is to pre-heat the engine, which was thoroughly covered earlier.

The second role is temperature regulation. Because glow plugs produce heat, they must monitor their temperature. They should regulate the temperature of the cylinder as well.

For example, if they get too hot, they may begin to melt the cylinder since they sit on top of it. To avoid this, the glow plug moderates its heat and performs the required adjustments to keep the area at an optimal temperature.

A glow plug’s last function is a post-heating process. The glow plug retains its heat when the driver switches off the engine. It allows it to begin its pre-heating function again rapidly.

In a simpler answer, diesel engines use a compression-ignited injection system, different from the spark-ignited system used in gasoline engines.

The difference in combustion systems is due to the type of fuel used. While gasoline can be ignited in any state, diesel must first be atomized. 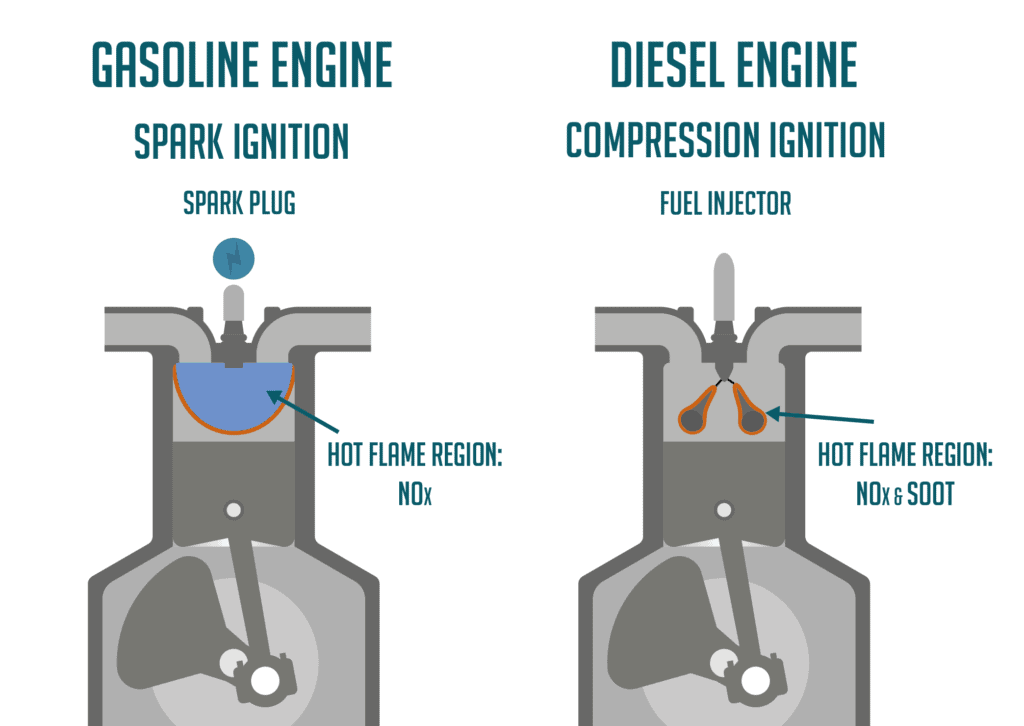 Diesel is pumped into the engine’s combustion chamber via the compression-ignited system, which is ignited at high temperatures. The engine piston compressing gas causes a high temperature.

Because of the differences in combustion systems, a spark plug is not required to start the engine. Here are other points why glow plugs are predominant in diesel engines: 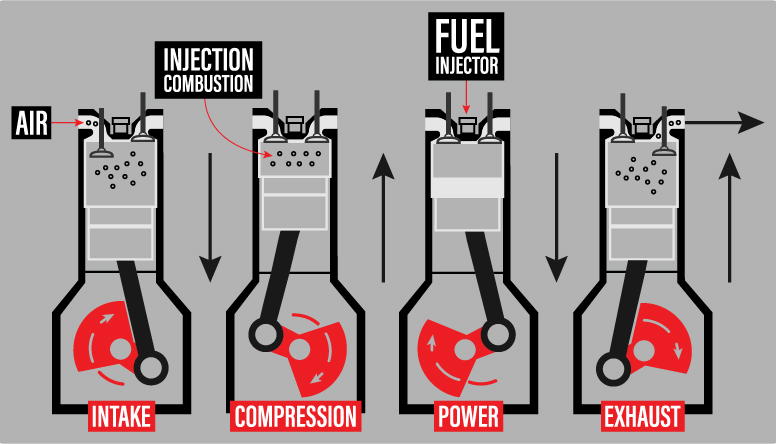 As a result, the temperature generated when air is squeezed in the cylinder is sufficient to ignite the atomized diesel. Thus, removing the need for a spark.

Diesel engines have high ratios of compression when combining air and fuel. Because gasoline is more prone to self-ignite, it cannot produce the same compression ratio.

On the other hand, diesel is less volatile. Thus it has a lower self-ignition temperature and can burn when sprayed over warm air. 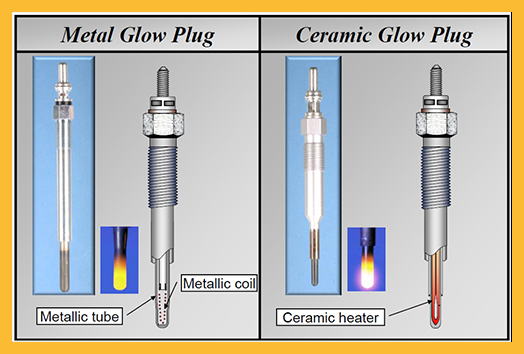 When looking for glow plugs for your engine, you’ll realize that there is more than one type of glow plug. Here are the varieties of glow plugs and what sets each one apart.

Ceramic glow plugs may be a bit expensive, but they’re worth it. They can withstand higher temperatures than other varieties of glow plugs.

These plugs get quite hot quickly because the ceramic material utilized can heat up quickly and generate a steady quantity of heat.

Moreover, it keeps the heat in for a longer period. As a result, this glow plug is suitable for those who reside in colder climates. You’ll have to spend less time trying to start your car and more time driving.

Because they can withstand higher temperatures than conventional plugs, they also make it easier to restart your vehicle after it has been turned off.

Ceramic glow plugs have a reputation for being efficient because they can start your vehicle rapidly.

It also means that your vehicle will be more fuel-efficient. Your car will require less fuel to start the engine and drive the vehicle.

The pressure sensor type is frequently the glow plug slightly over some people’s budget. However, it’s on another level of innovation.

In addition, the plug not only starts your diesel engine but also provides an accurate reading of the cylinder pressure. It is highly useful because it indicates how efficiently your engine is operating.

You’ll know when to take your car to a repair shop to have it checked ASAP.

Steel glow plugs are the least expensive glow plug and the most common ones most drivers use. Because they are made of steel, they may take a little longer to heat the engine in cold weather.

However, it isn’t as efficient as other types of glow plugs, but it will surely start your engine. But if you don’t frequently drive or live in a temperate climate, this type is the best option for you.

How Many Glow Plugs Does a Diesel Engine Have? 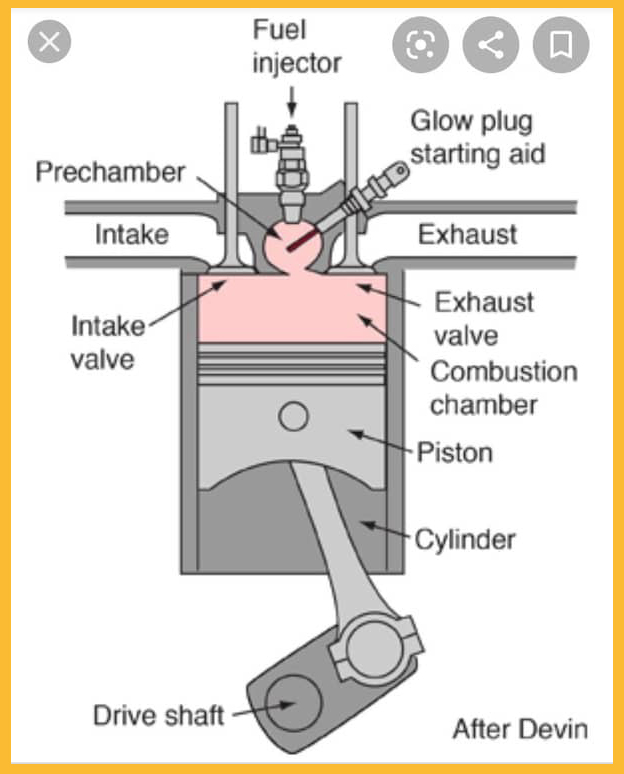 Let’s go through the number of glow plugs in a diesel engine if you’ve made it this far.

A glow plug is required for each cylinder in a diesel engine. If your car has a six-cylinder engine, you will require six glow plugs.

Note that a diesel engine requires one glow plug, not a spark plug, per cylinder.

How Frequent Should You Change Diesel Glow Plugs?

Anyone who has a car should know Engine maintenance is an essential element of owning a vehicle. You can extend your engine’s lifespan by maintaining it regularly.

That’s why glow plug replacement should be part of your routine maintenance. It’s not a surprise that this piece of device deteriorates with time.

The more you use your vehicle, the faster it deteriorates. Glow plugs, on average, last 100,000 miles before losing efficiency or breaking.

Also, do not replace only one. Replacing all at once guarantees that your engine’s cylinders continue to perform efficiently.

Remember that even if one glow plug begins to fail, the performance of your entire engine can suffer.

Here are some of the main reasons that glow plugs fail early:

What Happens If a Spark Plug Is Used in a Diesel Engine?

Putting a spark plug into a diesel engine is incredibly inefficient.

Of course, it will aid in combustion. Still, due to the excessive heating, the moles of the fuel will burn faster than intended.

Therefore, it may not have the desired power rating towards the expansion’s end. It is due to the flame front having aided in burning the end gas earlier than expected.

Moreover, the next cycle will accumulate extra heat in the combustion chamber. It will have its heat accumulated on its surface.

This will cause surface ignition, in which the fuel mixture ignites other than its only ignition source, followed by knocking.

How Do Gas And Diesel Engines Differ? 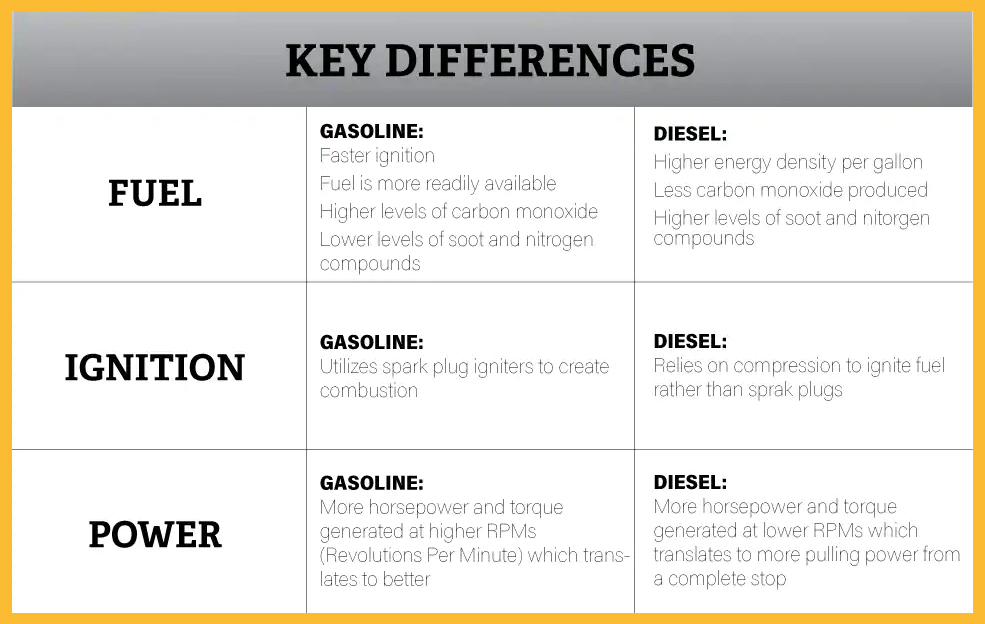 Although diesel and gas engines are quite similar in structure and operation, how combustions occur differs significantly between diesel and gasoline.

Fuel is combined with air in a gasoline engine, squeezed by pistons, and ignited by spark plug sparks. On the other hand, in a diesel engine, the air is compressed first, then the fuel is injected.

How Does a Diesel Engine Use Fuel?

Can a Diesel Engine Run out of Fuel?

When you run out of fuel, it begins to suck air because there is no more fuel to bring in. The air drawn in by your diesel car’s powerful fuel injectors could have disastrous consequences.

In addition, you may need to bleed the system to get rid of the air before you can refill it with diesel. The process is meticulous and is a job best left to a professional.

How Much Fuel Does It Take to Start a Diesel Engine?

When starting a gasoline engine, you need around 1/2 teaspoon of gas. To do the same amount of work, less diesel fuel is required.

By now, you should already know the answer to “how many spark plugs does a diesel have?” Diesel engines don’t have spark plugs since their combustion system is based on pressure rather than spark.

Hence, a diesel car needs glow plugs to start its diesel engine. But a diesel engine, like a gasoline engine, employs one glow plug for each cylinder.

Glow plugs come in various styles, and replacing them every 100,000 miles is simple and can help your car run more effectively.