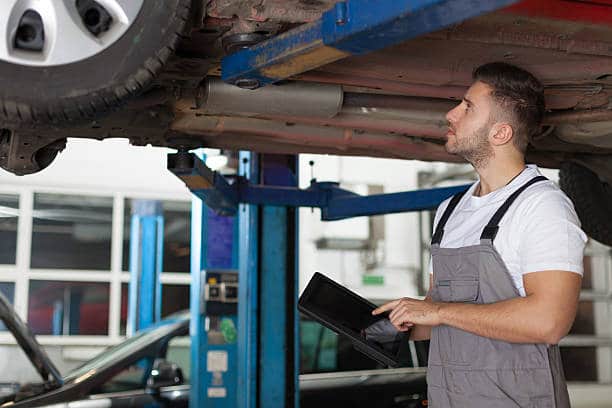 All car frames will have some form of rust. The difference is how severe the rust is on the car frame.

The amount of rust on a frame largely depends on where you drive the car, where you live, and if the car frame has rust protection in the first place.

One of the biggest reasons cars can have rust on their frames is the salt used to melt snow. As much as it helps clear the snow faster, you end up piling it under your car frame leading to rust eventually.

How Much Rust Will Be Too Much For A Car Frame?

Before you can try to save or buy a car with rust, there are a few things to keep in mind. First, what is the age, mileage, and price?

For a car that is over 15 years old with over 200,000 miles on the clock, having too much rust does not make it a good deal.

Look at the type of rust that the car has. The common types include penetrating, scale, and surface.

Surface rust is easy to fix. Scale rust may run deeper, but it is repairable. However, penetrating rust makes the frame brittle and sometimes hard to fix.

Where is the rust located? If the frame is rusted in key areas that support the car’s components, then it is not worth getting such a car.

Read More:  How Long Does It Take To Replace A Clutch

How To Inspect The Car For Rust

In case you are interested in buying a certain car, it is vital that you do a proper inspection to find out about the condition of the frame before buying. Here is how you do it.

This quick video should also help

Can you prevent rust on a car?

Yes. If you live in areas with salt on the road, have the car cleaned including washing the frame to keep the salt from rusting the frame.

How long can a rusted car frame last?

It will mostly depend on the extent of the rust. If it is surface rust, it can be repaired easily.

Can a rusted frame be repaired?

Yes. Some types of rust can be complicated, but most are repairable. However, if the cost is too expensive, sometimes there is no need to go through with it.