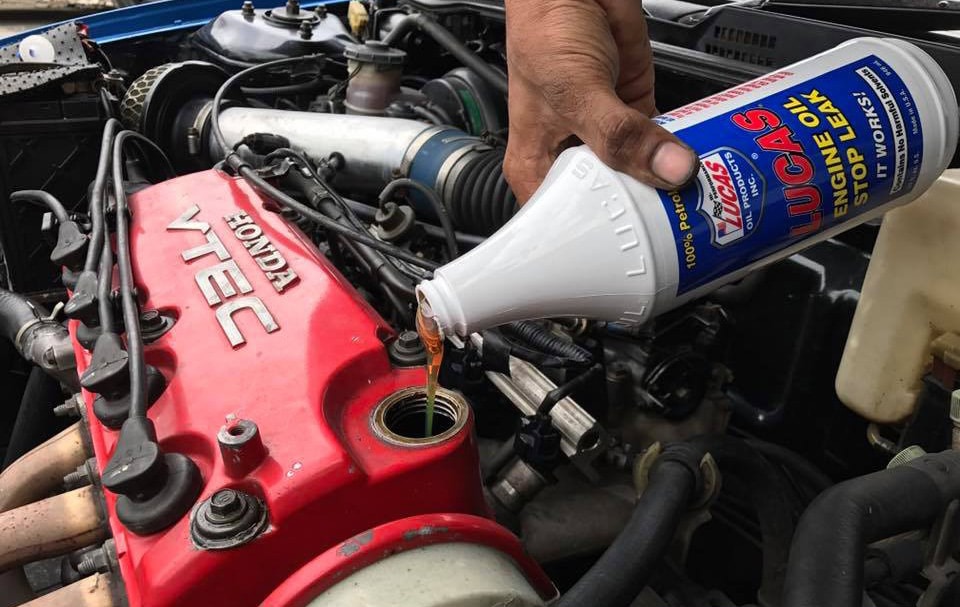 White smoke coming out of the tailpipe in the morning is a sign that the valve seals on the engine are worn.

This situation means that oil can get into the combustion chamber even when the engine isn’t running. From there, know that this can damage your engine.

A lot of miles can show this. Let Lucas Engine Oil Stop Leak do its job for a few days for this to happen. Use 20% of the system’s capacity.

To keep motor oil from spilling, mix 1 quart of Lucas Engine Oil Stop Leak with 4 gallons of motor oil and shake it well.

How To Stop A Leak In An Engine With Lucas Oil?

In this video, Tom Bogner, the director of R&D, will tell you how to stop a leak in an engine with Lucas Oil.

According to him, if you notice spots when you move your car in the driveway, there’s a high chance that you need to add 20% of Engine Oil Stop Leak to your motor oil and top it off. This step is the best way to reduce or stop the oil leak.

Engine Oil Stop Leak also aids in raising oil pressure in older, worn-out engines. So, it is very helpful even for your old trusty car. It also decreases smoking by including lubricant in your engine’s valve seal oil.

Please note that oil-stop leaks are meant to make gaskets and seals work better so that they don’t leak. Oil to stop leaks, on the other hand, won’t help if your engine has a big hole or damage.

Finally, you must pay attention to the instructions given so you won’t be able to hurt your engine.

What Is A Lucas Engine Oil Stop Leak?

Lucas Engine Oil Stop Leak is a mixture of Lucas additives and base stocks meant to stop engine leaks.

It’s also good for engines that have been used a lot because it reduces engine noise and oil consumption while increasing oil pressure. It doesn’t have any harmful solvents, and it can make motor oil last up to 50% longer.

What Makes Engines Leak and How Do You Fix Them, As Well?

Users should expect less engine noise, more oil pressure, and less oil consumption as the Lucas additives fill in the gaps between the worn parts of the engine.

Lucas Engine Oil Stop Leak is good for automatic gearboxes, hydrostat transmissions, and hydraulic systems. Most of the time, 10% is enough, but in very old machines, you can use more.

When Does Lucas Oil Stop A Leak?

Many people often ask this question. It will take about 370 to 500 miles during the process, giving you enough time to go to a service station and fix the leak before you leave. The fluid makes the engine oil more stable at high speeds and temperatures.

Read More:  How to Test a Spark Plug (With and Without Spark Plug Tester)

How Long Does It Take For A Stop-Leak To Function?

For 15 to 30 minutes, you should drive or let the car run for that long. A leak is usually fixed right away, but in some cases, it can take up to 30 minutes to get it all shut down.

In some cases, if the leak isn’t fixed in 30 minutes, there may need to be a second application or some mechanical repair.

Can Oil Leaks Damage Your Engine?

Oil leaks can damage your car’s engine, radiator, heating system, cooling system, and the environment. If these parts aren’t properly cared for, the rubber hoses and seals could be damaged by oil and wear out early. Oil spills could be dangerous for fire and safety.