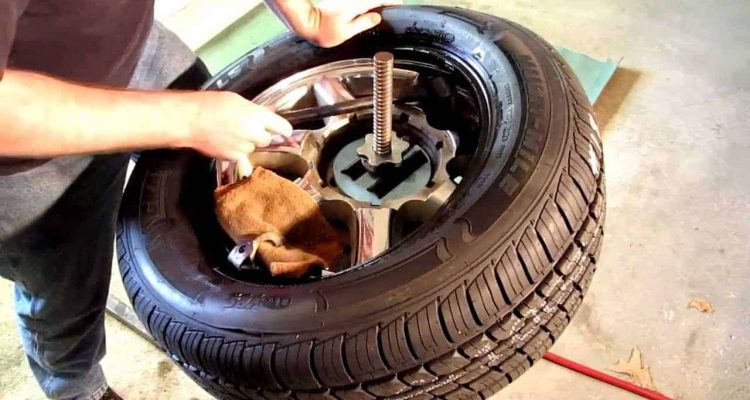 When you have a car, it is always important that you have it in good condition if ever hope to keep driving it for a long time.

The first thing to consider is if the tires are correctly inflated or if one has a puncture and what to do next about it.

Tire leaks around the rim can be because of many things including punctures, ripped tires, poor valve stems, bent rims, and more.

It is crucial to have the rim and tire correctly sealed to keep the air from leaking and also be able to drive better without a problem.

Why The Tire Leaks Around the Rim

Before we can look at sealing the tire to the rim, first it is crucial to understand why it is actually leaking around the rim. Once you know the problems, you can now address them better.

Here are a few reasons your tire is losing air around the rim.

People love the alloy wheels look. This includes the use of aluminum or magnesium-based alloy wheels. As much as they look good, they are not as strong as the steel wheels that some car makers have on their base models.

When the alloy wheel is hit hard, let us say a pothole, you are bound to experience some issues. It can include bending your wheel.

It might not happen the first time, but when you make it a habit of hitting potholes, the wheel will definitely bend.

So, if you visually see that the wheel is bent, have it straightened first before trying to seal the tire to the rim.

You also need to check the wheel for porosity. It could be that it has cracked somewhere else other than the rim which is making it lose air pressure fast.

Read More:  Can You Change Spark Plugs When Engine Is Hot? [Correct Temperature]

There are some people who might decide to inject a tire sealant hoping it would seal the rim. That would not help as such sealants sometimes lead to rust rather than helping.

Another cause for having a tire leaking at the rim is because there is bead damage. The beads are important to ensure the tires can seal with the rims correctly.

In case there is damage to the beads, you end up losing tire pressure.

Of course, the tire age would be a big factor in determining if it can hold up against the rim correctly. If the tire is too old, then you can experience dry rot.

At this point, you would have reduced elasticity thus the tire does not seal properly.

It could also be that the beads were damaged when the tire was removed or added to the rim. Another thing is that a corroded rim would not hold up to the seal as well as a clean and pristine rim.

Also, hitting potholes more often can leave you with damage to the beads too. So, try to avoid roads with too many potholes or drive slowly when you are in an area known for many potholes.

The most common reason why your valve stem might get damaged is because of exposing them to the elements. Some of these elements are hard to avoid, so it is not always your fault you have a leaking tire.

The best solution for such a problem is to replace the leaking valve stem with a new one. These valve stems are generally affordable, so it should not be a big deal to have them replaced.

Here is a video on fixing valve stems

Sometimes it does not have to be complicated. It could be as simple as a punctured tire.

The tire could be punctured close to the rim, which makes it harder at times to find it. The best way would be to have it checked at the tire shop to find out what could be wrong with it.

Read More:  How To Open A Trunk Without A Key (Easy Guide)

Sometimes the puncture could be small making it hard to detect unless a professional take a look.

Steps for Sealing a Tire to the Rim

Sealing the tire to the rim should not be hard. That is what we discuss below. Follow these steps to have a working tire with no chances of leaking tire pressure.

In case you find that the resealing did not help, then it could be a puncture. For such an application, it is best to have a tire shop patch the puncture if you do not have the tools.

Why Your Tire Loses Air Slowly and How to Fix It Can you grease a tire bead?

It is not advisable to grease the tire bead. This would make it not hold the seal correctly and such materials can also damage tire beads over time.

Can a rim leak be fixed?

It depends on what is causing the leak. It could be that you hit a pothole at high speed and the wheel is severely bent. This might need you to buy another wheel. However, a puncture around the rim can easily be fixed.

How much will it cost to reseal a tire?

Resealing tires does not cost much. A shop can charge an average of $15 to do this job. You could get a kit from an auto store for $9 and do it yourself.