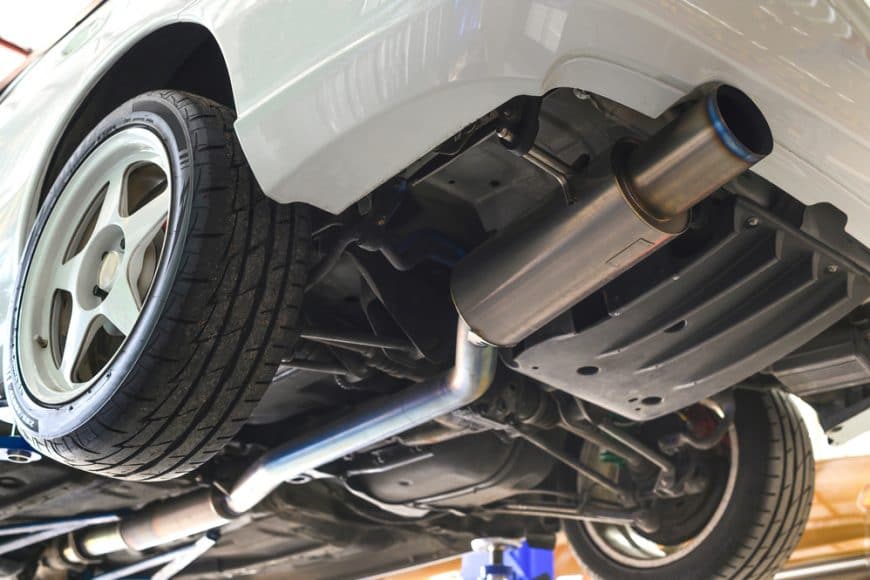 A muffler delete would not harm your engine or car, but it may sometimes throw codes, especially in modern cars. This is because the system thinks there is something wrong with the car since there is no muffler anymore.

For those who do not know, a muffler delete is a process of removing the muffler from an exhaust system and having it replaced with a simple metal pipe.

A muffler is a device that is added to the exhaust system to help suppress the sound. So, the moment it is removed, expect the car to be louder.

Here is a video highlighting the difference in sound with the muffler on and off the car.

Potential Risks of Having a Muffler Delete

Without having a proper muffler, the chances are your car now sounds louder. This can be satisfying to the car’s owner, but the neighbors might hate it a lot.

There are some people who love the cold starts of a car with no muffler, but if you do it every morning, the neighbors might not be happy.

Also, a loud car might not be the best for daily driving. This is because the loud sound gets annoying even to the driver after a while.

You may have seen that muffler deletion is advertised as a way of increasing horsepower. This alone could have made some people consider muffler deletes on their cars. However, that is not the case.

Read More:  Can I Use Anti-freeze Fluid For Power Steering Fluid? [Answered]

A muffler delete might leave you with a power gain of around 1 to 5 horsepower only. This would not be noticeable to the driver.

Most states will have a limit on the sound an exhaust system can produce. That is why those with muffler delete have to live with the police always stopping them and sometimes issuing tickets.

So, check with your state to understand the noise levels a car makes before it becomes illegal.

Sometimes it is possible to have an exhaust leak depending on how the new tailpipe was welded on. If a good job was done, then it should be worth it.

Rust is another problem also. It could make the tailpipe snap where it was welded. So, have a properly equipped workshop to work on the car and have the weld done correctly.

Depending on where you live, there might be the need to take the car for proper inspection before it is allowed on the road legally. Having a muffler deleted may lead to failed inspection until the muffler is fitted again.

Better Ways of Having a Louder Sound

Rather than deleting the muffler, simply replace it with a better one. Expect a performance muffler to be around $80, which is not bad for something that makes the car better.

With the change of the muffler, you have the choice of picking a louder or slightly quieter muffler. As such, the car can be a bit louder than stock and still remain legal for you to continue using without a problem.

A cold air intake will leave the car’s engine having more oxygen and can lead to more power. It might be an expensive product at $200, but it does a good job for your car’s performance.

While the others you had to spend money, this time around it is free. Of course, drilling the holes have to be done right or you risk damaging the exhaust system.

You can drill small holes in the exhaust system just before the muffler. This position is better as you do not risk damaging the oxygen sensor. You might just be surprised by how loud it can be.

Can You Undo Having a Muffler Delete?

Yes. that is not a problem at all.

Sometimes it could be a mistake and you just need to have the car sound as it did before. Well, you need to find the right muffler for the car and weld it back on.

Hopefully, you had not thrown away the one you cut from the exhaust. If you had already one that, then it might cost you more to get another one.

Is there a difference between a muffler and a resonator?

The work of the resonator is to tune down the sound waves in an engine while the muffler completely cuts it off. They can work together to keep the sound from the exhaust within the legal limit.

Having a muffler deleted does not harm the engine. It will only make the car sound louder, which might be an issue with the authorities.

Does a muffler delete sound great?

It depends on the type and model of the car. It might sound better, but some cars are the worst when there is no muffler. They would be sounding horrible.

This is not always the case. The work of the muffler is to suppress sound, thus it does not affect fuel use.

Does having a muffler delete increase horsepower?

Not necessarily and if it can increase horsepower, it is negligible. It would not be too much to the point the driver notices it.