Choosing between different hedge trimmers is fun but also difficult, and it gets even trickier when you don’t know which trimmer type you want.

It can be gas-powered, battery-powered, and electric; They all have their distinct strengths and weaknesses and can cater to a wide variety of applications.

Such is the head-to-head here between the Makita XHU02Z and Black & Decker HH2455. One of them is convenient, easy to use, and powerful enough as a battery-powered hedge trimmer, while the other has more power and more long-lasting.

While the purpose of hedge trimmers is to keep your garden clean and tidy, there are different ways to do this based on the trimmer type. You can go for an electric device if you want additional power than a more convenient battery-powered trimmer can provide. You can even go all-in on power with a gas-powered model.

We know that it’s a tough call, and this article will help you learn the factors you need to consider and how to choose the right hedge trimmer for your needs.

A hedge trimmer’s power capacity highly depends on the power source, and there are three kinds of hedge trimmers according to how they are powered:

There are two things you need to consider, the type and length. First, single-action blades can do most trimming tasks, but dual-action blades that cut on both sides will make you more efficient.

When it comes to length, while it’s better to have a longer blade that cuts a bigger area, you shouldn’t go for something so long that it’s a hindrance. A blade that’s too long can hinder your control and cause uneven trims., and you can also cause injuries when you make an error.

Trimming hedges is already hard work, and hedge trimmers should make it easy. That’s why you need to look for a device that doesn’t do the opposite.

Many things can make you more comfortable while trimming like multi-functional handles and reduced vibration. There are many ease-of-use features out there, and you should make your life easier by getting a trimmer with some of them. 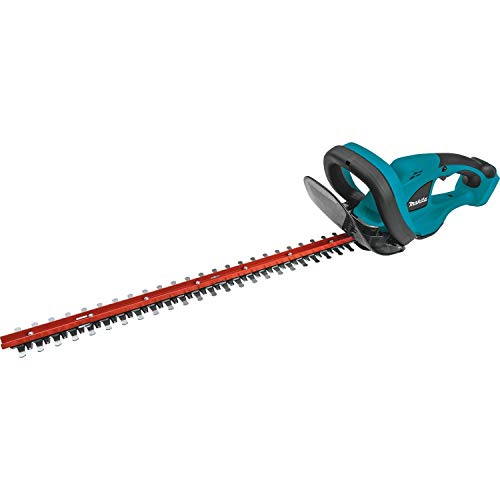 The XHU02Z is produced by Makita Corporation. Makita is a Japanese power tools manufacturer that has been in the industry since 1915. It’s currently a global brand with its products being sold in over 40 countries.

1 1/2 hours isn’t exactly a long time, but it’s sufficient to cover most light trimming applications, which should be what you need because you’re looking at an entry-level hedge trimmer like the XHU02Z.

The XHU02Z can produce 2,700 SPM, which is impressive for an entry-level hedge trimmer. Combining the battery’s capacity and this amount of cutting power, you don’t have to worry about not finishing your job because it’s powerful enough to handle what you need it to do.

If you don’t have a big garden or you won’t need it for heavy applications, the Makita XHU02Z shouldn’t disappoint.

With a long 22″ dual action double-sided shear blade, the Makita XHU02Z offers good productivity as it can trim a bigger area in a single stroke.

While this blade is definitely a plus, you need to be careful if you’re not used to using hedge trimmers. Since it’s longer, it’s tougher to maneuver within tight spaces, and it can hinder your control. It’s not that long, but it’s always better to take caution.

Since you’re obviously going to do some work in your garden, you’re going to have to deal with dirt and dust which can cause buildups within your device and cause jams and damage. Furthermore, water can be involved, which can cause damages to your trimmer’s electrical components.

Recognizing this, Makita developed the Extreme Protection Technology to give added dust, dirt, and water resistance to their devices and make them more durable and long-lasting.

Luckily for you, the XHU02Z is equipped with this technology. If you’re going to use your hedge trimmer in difficult conditions, this model is a good option because it has added protection against the elements. 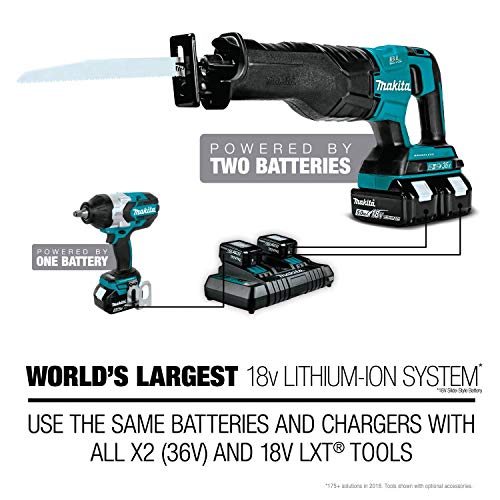 While an overloaded hedge trimmer can waste your money, it can cause more damage than that. Trust us; you wouldn’t want it to overload while you’re holding it.

To protect it from overloading, over-discharging, and overheating, Makita added the Star Protection Computer Controls to minimize these risks.

Due to this, you don’t have to worry about your hedge trimmer encountering electrical troubles because it has a safety net to protect you.

According to the manufacturer, this model can only get as loud as 87 dBA, meaning it won’t annoy you with too much noise as you’re holding it.

Also, it’s a huge plus if you’ll trim early in the morning as you don’t have to worry about troubling sleeping people around the neighborhood.

The Makita XHU02Z has a variety of additional features designed to aid in user control, comfort, and efficiency.

Because you’ll use your hedge trimmer with your hands, it’s highly important that you’re comfortable with the device to make the most even and accurate trims.

Makita knows this, which is why they developed an anti-vibration design that includes placing five cushions within the trimmer’s housing to reduce vibration. It also has a rubberized soft grip to increase user comfort.

This model is a good option that can keep you comfortable even if you’re trimming hedges. It can keep you in control and make accurate trims.

Charger and battery not included

If there’s one downside to this hedge trimmer, it’s that it doesn’t come with a charger and battery upon purchase. These are purchased separately.

It’s not much of a problem, but most of its counterparts already come with a charger and battery.

On the other side, it can also be an advantage if you already have a Makita battery compatible with your hedge trimmer because you won’t need to buy the charger and battery separately. 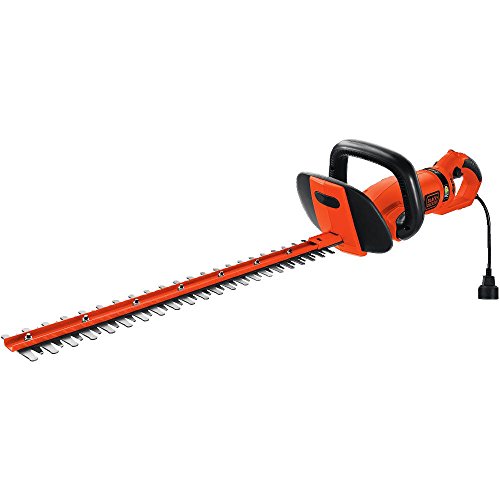 The HH2455 hedge trimmer comes from Black & Decker, a Baltimore-based power tools manufacturer that has been around in the industry for a long time.

Founded in 1910, B&D is known as a reliable brand, with many first-time power tools owners choosing the brand due to its reputation as a good, long-lasting brand.

Back to the hedge trimmer, the HH2455 is an electric-powered device that can use 3.3 amps of electricity and produce 2,800 strokes per minute. It has a 3/4″ thick-cutting capacity, 180 degrees rotating rear handle, 24″ dual-action blade, built-in cord retainer, lock-off & lock-on switches, soft-grip handle, and full bale handle.0

The Black & Decker HH2455 is an electric hedge trimmer. Since it doesn’t have a battery, it has much more power and long-lasting ability than battery-powered ones.

This model can support up to 3.3 amps of electricity, and it’s powerful enough to have a high performance in both basic and challenging applications.

However, since it’s a corded hedge trimmer, it can be a bit of a disadvantage because the cord can distract you while you’re trying to do your job. It’s a hassle, but you can easily avoid it by being organized and minding where the cord is.

This model comes with a longer 24″ dual-action blade that can really boost your productivity.

For those who don’t know, dual-action blades are better than single-action ones since they cut hedges from two sides, increasing the amount of work done saving you time.

Furthermore, with dual-action blades proven to produce 40% less vibration compared to single-action blades, this hedge trimmer is a breeze to control since you won’t have to deal with too much vibration that can make your cuts uneven.

However, be careful with this one, as its long size can hinder you when operating in tight spaces. Also, this can make it more difficult to store since you need a bigger space.

The Black & Decker HH2455 is a pretty good option if you’re looking for a hedge trimmer that improves your productivity and lets you tidy up your garden faster, and you won’t be disappointed with it.

When trimming, you’re not just going to deal with leaves, you’ll need to handle troublesome branches that can cause jams and can make you stop and cut it manually when you’re using a weak device.

With the Black & Decker HH2455, you won’t need to worry about this happening too much because this model can pierce through branches up to 3/4″ thick.

You may still encounter problems, but you’re also probably using this hedge trimmer for something more than it’s designed for. 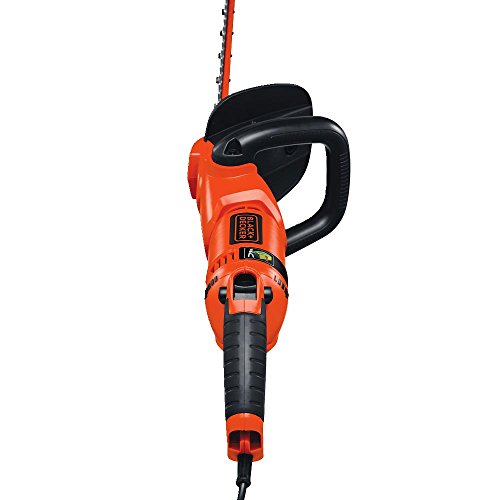 Other than the full-wrap D-grip front handle which is standard in most B&D hedge trimmers and can improve maneuverability in horizontal and vertical use, the HH2455 also has 180 degrees rotating rear handle.

Cords can hurt ergonomics, but B&D has it covered or at least slightly improved with a built-in cord retainer. The cord retainer can prevent the cord from dangling around whilst you work, improving usability.

It also improves safety because it’s dangerous to work with a dangling cord as you can trip on it and injure yourself.

Furthermore, it has a soft-grip handle and full bale handle that allows you to select multiple types of grip to improve maneuverability and comfort.

The B&D HH2455 also has lock-on and lock-off switches to prevent accidental starts and shutdowns.

With these features, this hedge trimmer is a strong device with a lot of usability features to ensure that you can handle the power without any hiccups.

My hedge trimmer won’t turn on out of the box. What should I do?

First, you should check if you followed all the directions in the manual regarding assembly. Also, make sure that the battery or power source is all good. If it’s all good and the device won’t start, don’t tinker with it.

Instead, call customer support and learn what you can do and the warranty rules regarding such cases.

Other than cleaning it after use and keeping it in a storage place, hedge trimmers don’t need too much maintenance. You’ll also need to perform a periodic oil change, though.

If it occurs that parts get damaged, don’t worry because there are a lot of aftermarket parts, and it’s relatively easy to order legitimate replacement parts from the supplier.

The comparison between the Makita XHU02Z and the Black & Decker HH2455 is a particularly interesting one. With one being battery-powered and the other electric, both hedge trimmers bring distinct advantages to the table.

In terms of power, with an 18V battery that can chuck out 2,700 SPM, the Makita is no slouch. It’s a portable device with lots of power that comes with it. However, the B&D hedge trimmer takes the advantage here.

Yes, the B&D has 2,800 SPM, just 100 SPM ahead of the Makita. But, since it’s an electric hedge trimmer, you can apply that power without thinking of using up all of the battery, and since you get to run it longer, you have an unlimited time of 2,800 SPM performance.

It may look close on paper, but the B&D HH2455 gets this one by quite a margin.

B&D also has the advantage when it comes to the blade that they use. Both brands use dual-action blades that trim more and produce less vibration. It has 2″ on the Makita.

It’s not that much of a difference, but when you consider the amount of added progress you can do within hours of trimming with a blade longer by 2″, the B&D is better.

If there’s an area that the Makita has an advantage, it’s in the additional features. It’s a safe, reliable device due to the Extreme Protection Technology for durability and Star Protection Computer Controls for electrical safety.

The Makita also has an anti-vibration design to help user comfort and control.

It seems obvious now, but we’ll say it anyway, the B&D HH2455 beats the Makita XHU02Z in this head-to-head.

The Makita XHU02Z is still a good option if you really need the portability of a battery-powered device, but if you want a wise purchase that you can rely on for various applications with better performance and will also last a long time, B&D is just better.