Are you seeking to know more about pan head screws?

There are many different types of pan head screws available in the market. Each type has its unique features, which makes it suitable for a specific application.

On the contrary, pan head screws are one of the most commonly used fasteners in the world.

We’ll be talking more about the pan head screw, its types, and information about it. Let’s get started!

What are Pan Head Screws?

Pan head screws may look like an ordinary screw, but more to it than meets the eye. The pan head screw gets its name from the shape of its head, which resembles an upside-down frying pan.

The screw is identical to round heads and binding heads in terms of usage and appearance. But pan heads have entirely replaced the other ones in the mainstream application.

Moreover, it has a head that is flat on top and rounded on the sides. It is free from pointed or sharp edges on its head for safety purposes.

Some types of pan head screws are slotted, Phillips, and hexagon socket. They are available in zinc-plated, white-coated, black-coated, and uncoated stainless steel.

Pan head screws are a form of a non-countersunk screw head. The form is commonly seen in screws like machine screws, wood screws, and self-tapping screws.

We also hit you with another unknown word, non-countersunk. Let’s dive into that briefly.

A non-countersunk screw head juts out from the surface into which it is inserted. It sticks out rather than sinking into the material.

Moreover, screw heads that are not countersunk do not taper towards the shank. They have a narrow shank that is immediately followed by a wide head.

Now, as there are different applications of screws, pan head screws are primarily used in wood and steel.

Wood pan head screws are usually made from coated steel or brass. Some are treated and plated with zinc for indoor use.

They are great for ordinary wood, chipboard, or plywood. You can also use it on plastic or PVC in some instances, but it still depends on the manufacturer.

Usually, wood screws are countersunk but not this one. Pan head screws made for wood are non-countersunk which lets it protrude after installation.

Another characteristic of this screw is its thread. Most wood screws are coarse-threaded and are always fully threaded.

Pan-head screws used in materials made from metal are sometimes called pan head machine screws. They are usually smaller than their wood counterparts but can still be made for big-scale applications.

Machine screws, in general, have finer and uniform threads along the shank up to its tip. They are installed with a pre-drilled hole or a nut.

By and large, machine screws are typically stronger than other screws.

How and When To Use Pan Head Screws?

Many people are confused by the pan head screw and what you can use it for. They don’t understand how it is different from other screws and why it’s used in certain applications.

Read More:  17 Types of Sanders and Their Uses for Home Projects

Pan head screws are used in different applications, including but not limited to:

Most large-scale manufacturers frequently use this screw to secure metal components like machinery like electro-hydraulic servo valves. It’s also used in automobile parts and accessories such as license plates and headlights. Learn here: What Size Are License Plate Screws

When combined with the high edges, the wide diameter of the pan head screws results in a huge, deep socket. It allows for high torque during assembly while limiting cam-out, which could affect the screw negatively.

The screw’s flat underside produces a large mating surface area, allowing for firmer hold even in expanded holes. It also minimizes crushing and dents on the material’s surface.

The slightly domed shape gives a clean finish for aesthetic applications. It also reduces the possibility of the head getting hooked to other materials during installation.

Pan head machine screws are commonly employed when a hex head is not suitable. It’s also suitable when the material is not thick enough to support a counterbored or countersunk hole.

There are different benefits when using a pan head screw:

The application is just the same as the other screws. The only difference is you don’t need to push the pan head screw deeper.

Screws come in different names, but most of them have something in common: their drive.

Most of us know that the drive of a screw is found at the top of its head. It is the cavity where the tip of the screwdriver or drill is placed to install the little hardware.

Here are some basic drives a pan head screw can have:

Slotted or flat pan head screws are characterized by a slot running across its head. A common type of drive.

Most people say flathead screws nowadays as slotted gives it more of an indecent and demeaning connotation.

Pan heads with slotted sockets are also more suited to light applications. You may fit it with a screwdriver or any simple tool with a slim tip more easily.

However, it doesn’t go well with power tools as they slip out of the drive. If the impact drill slips out of the slotted screw’s drive, it can damage the surface you’re working on.

The second most common type of drive is the Phillips. It is named after the American businessman Henry F. Phillips.

Philips pan head screw is distinguished by its cruciform or a cross-shaped indent on its head.

The main disadvantage of this is you cannot unscrew them with non-screwdriver items, unlike the slotted ones. They’re also easily stripped when often used.

However, it’s greatly used in most production lines nowadays as it doesn’t break when there is too much torque.

The combination screw (combi for short) is a fusion of two or sometimes more types of drives. Slotted-Phillips combination is the most common combi pan head screw.

Buy Online, Pick Up In Store

Get free in-store pickup! Now you can buy your items online and pick them up at a store near you.

Right off the bat, its main advantage is usability. With more options for the screwdriver, you can easily install it.

Now, on the downside, combination pan head screws are more likely to get stripped.

The square or Roberston screw emerged in the 1900s and was invented by Canadian inventor Peter L. Roberston. Also called a Scrulox, it’s characterized by a square indent on its head and is very common in Canada.

Robertson pan head screws have more torque than the Phillips screw as it goes deeper into the head. The screw doesn’t easily get stripped, and there’s no room for slippage.

The only downside of this type is you can’t use a non-screwdriver item or a Philipps screwdriver to unfasten it. It’s also a dilemma for most screws with unusual drive shapes.

Torx or Star screws have a six-pointed star shape indent on their head. The name Torx is a brand name, the official ISO name of this screw is hexalobular internal.

The Torx pan head screw eliminates cam-out, and the driver rarely slips out. Plus, they can take a lot of torque as it has six points of contact with the screwdriver.

It’s not usually used these days unless on automotive and electronics. But it’s gaining traction from manufacturers of other industries.

Most of us just categorize screws by how long or big they are. However, there’s more to it.

Manufacturers put specifications on the box or package that the screws are in. These specifications are alphanumeric codes that can be difficult to read if you’re unfamiliar with them.

Pan head screws have the standard dimension description like the length, size of the head, etc. But fastener manufacturers always put the thread callouts.

Thread callouts tell you the length and diameter of the screw’s shaft. Now, not all measurements are the same, which is why thread callouts are also written differently.

Here are the ways to read a pan head screw thread callout:

The Imperial system is widely used in the US and utilizes inches as measurement. There are five components in an Imperial system thread callout, and you need to read it from left to right.

Almost all countries use the metric system. It uses millimeters to measure a screw’s thread callout.

We’ll use M12 x 1.75 x 85 as an example. There are only four components in a metric system thread callout for pan head screws:

Read More:  How To Connect Generator To House Without Transfer Switch [Solved] 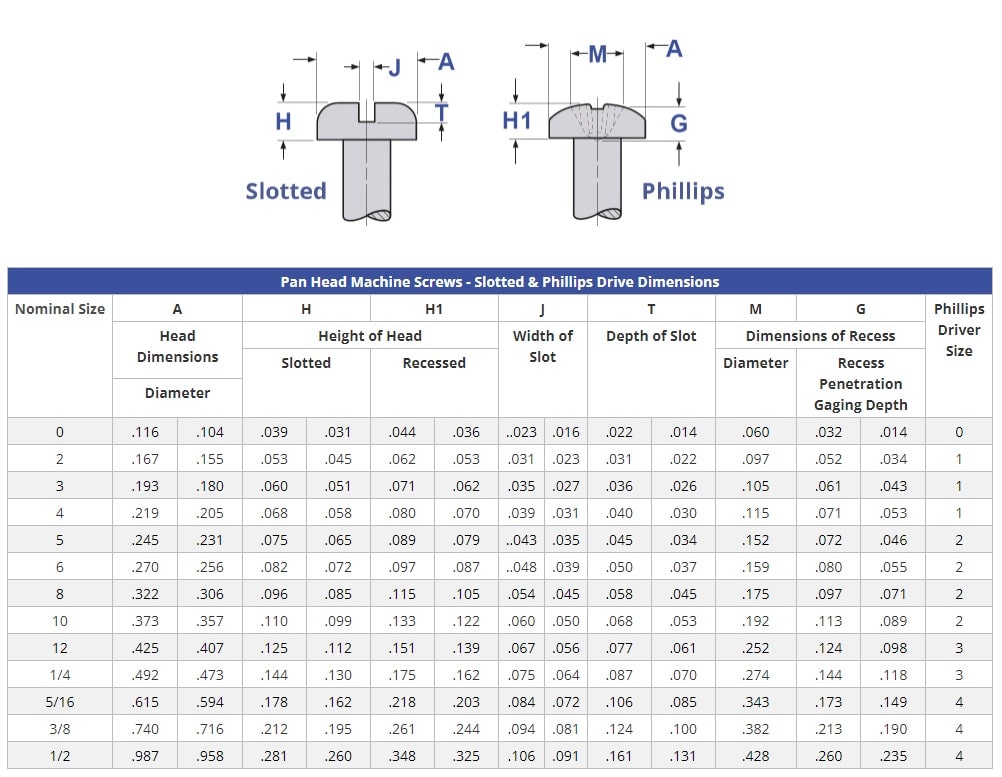 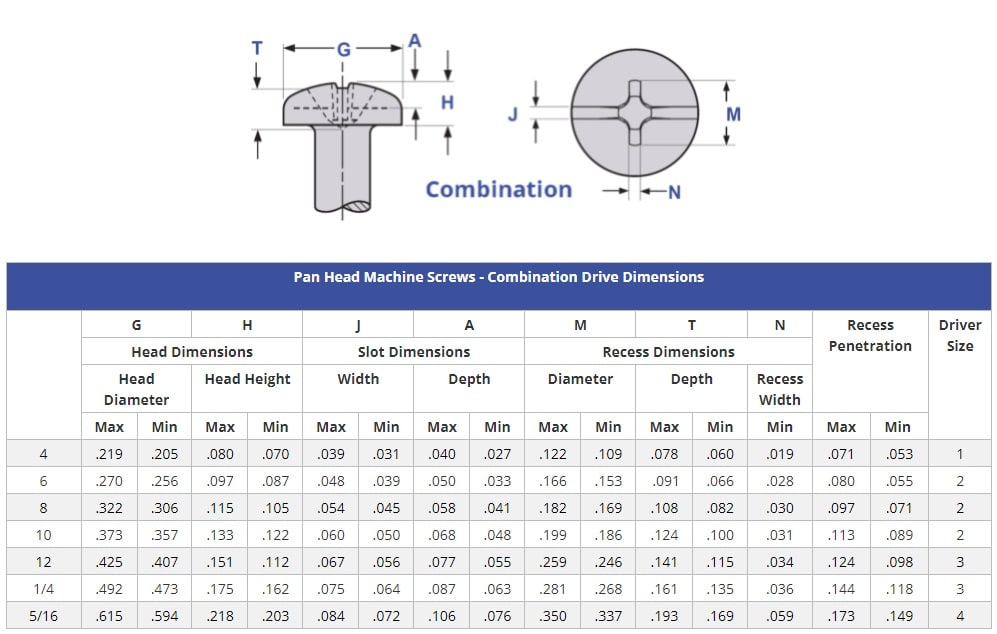 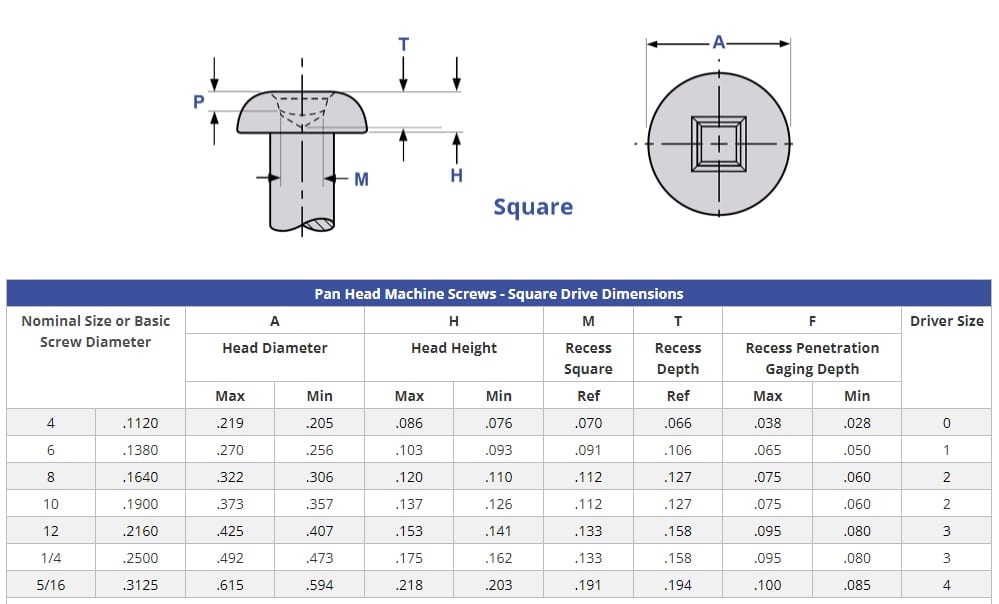 Although we put out a lot of information above, we’re sure you’re still hungry for more. Here are some frequently asked questions about pan head screws:

Which Screw Head Is Best?

The question is highly biased on a person’s point of view. Every screw has its advantages and disadvantages.

However, with the recent trends, a Torx or Robertson screw is better. They have high torque and don’t easily get stripped.

Why Are Screw Heads Different?

Cost and torque are the main reasons why there is a myriad of screw heads. Initially, slotted screws dominated the fastener industry as it was cheaper to make.

However, in time, most manufacturers saw some faults which cost them more. In time different individuals invented designs like the Phillips and Robertson screws to compensate for the problem.

These screws are expensive to manufacture but offer higher torque and fewer expenses from the people who use them.

What Is The Difference Between Pan Head And Button Head Screw?

Although they appear to be the same, they are not. The round-head screws have dome-shaped heads with tiny bearing surfaces.

Is a Pan Head Screw also a Self-Tapping Screw?

Some pan head screws are self-tapping ones. These screws usually don’t have threads a quarter before the tip and don’t need a pre-tapped hole for installation.

Can a Pan Head Screw be Stripped or Worn Out?

It depends on the type of drive it has. However, it also boils down to the frequency of use, materials used to make the screw, and if you’re using the right screwdriver.

There are many ways to remove a stripped screw, especially if it has a hex drive.

Screws are amazing yet tiny hardware that most of us don’t even comprehend. This guide will help you understand what makes a pan head screw.

It is a great choice for any project you might have in mind. The screws are in all sorts of sizes and materials, so there’s no shortage of options! Plus, they’re easy to identify with their pan-shaped head.

We hope this article is useful and has helped to demystify pan head screws a little bit more. We also hope that you have a better understanding of the differences between the different types of screws.