As the name implies, jumper cables are for starting your car when the battery is weak or dead. But which of the two wires is positive, red or black?

Connecting jumper cables the wrong way can melt them, damage the battery, and ruin your car’s electrical systems and electronics. As a result, you should always do it correctly and ensure a snug fit. That is, no loose connection.

Read on for detailed information about jumper cables and how to correctly connect them to the battery when you jumpstart your car.

Which is Positive on Jumper Cables, Red or Black?

The red wire almost always means a positive conductor carrying current from the source when talking about the DC power cable color code. The return wire or negative cable is usually black. This is the widely accepted cable code convention used worldwide.

Always connect your jumper cables appropriately, as we shall see later in this post. 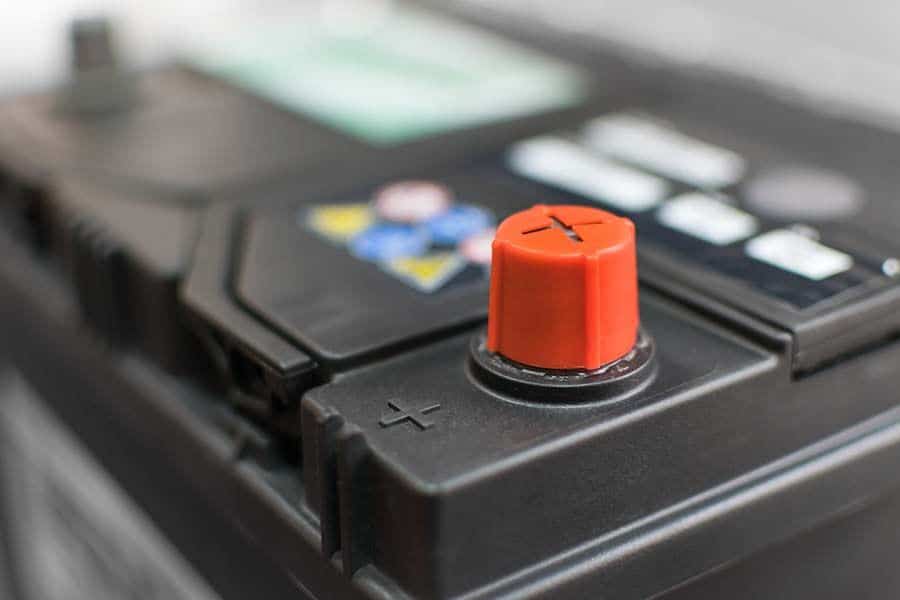 Your car’s battery has two terminals: positive (+) and negative (-). Sometimes differentiating the two is not apparent from the color codes, but which is which?

Most people connecting jumper cables in reverse often fail to distinguish the two battery terminals. You can determine positive and negative from the battery terminal covers.

Reason Behind the Color of Car Battery Terminals? 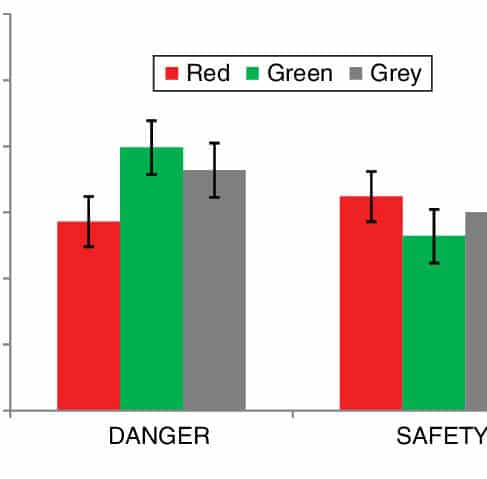 You might wonder why the manufacturers chose red and black as the conventional color for positive and negative battery terminals. If you care to know, the answer will surprise you.

In real-life, red means danger. It is the same thing when you consider electricity. The positive battery terminal can electrocute you, though it is rare in a 12V battery system.

Read More:  How To Check Tire Pressure Without Gauge [4 Methods]

The red positive terminal and cable only remind you as a driver to be careful when working with the car’s battery.

Since car manufacturers had already conventionalized the use of red and black colors to represent positive and negative terminals, jumper cable manufacturers followed suit. They didn’t want to bring confusion.

So, jumper cables were also made with red and black rubber covers to help you match them to the battery terminals. That way, the chances of reversing the polarities reduce to a minimum.

How To Connect Jumper Cables The Correct Way 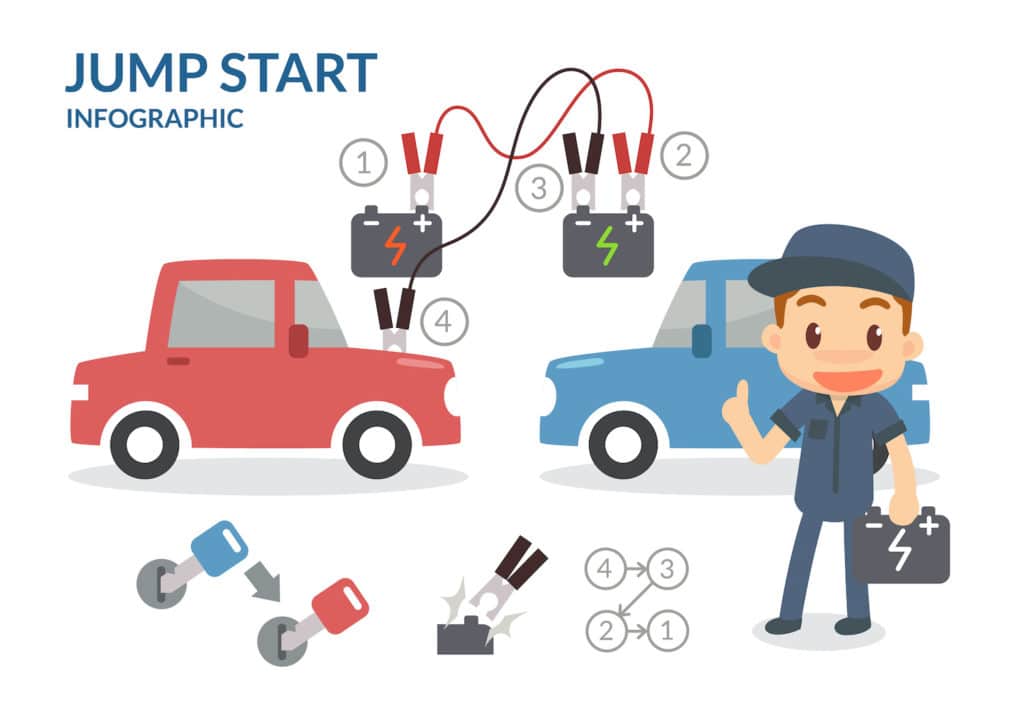 Connecting jumper cables when you jumpstart a car is not direct. The process is not about hooking the clamps to the respective battery terminals but a careful procedure you should follow.

Before we outline the process, let’s discuss a few things you should know. It will get us on the same page for a better understanding of the procedure.

1. Why Do You Connect the Red Cable First?

If you have jumpstarted your car or seen someone doing it, you know that the red jumper cable is hooked in first. But why is it crucial?

The complete circuit prevents sparkling, which can potentially damage your car electronics. But does that explain why the red jumper cables go in first? No!

Connecting the red jumper wires to the positive first minimizes the damage if the other red clamps accidentally connect to the chassis.

To stay safe, connect the red jumper cables to the positive battery terminals first, followed by the black jumper cable. It ensures the safety of your car’s electronics.

How to Use Jumper Cables:

2. Which Jumper Cable Comes Off First?

Now that you have known the first jumper cable to connect is the red one, which will be the first to come off? After you jumpstart your car, you should remove the black jumper cable first.

The reason for disconnecting the black jumper cables before the red ones are similar to connecting the red one first. It prevents possible damage to the car’s electronics and possibly sparkling if the positive terminal accidentally drops on the chassis.

Stay safe! Disconnect the negative jumper cables first and the red ones last.

3. How to Jumpstart a Car: Step-By-Step

This section outlines a complete procedure for using jumper cables when you jumpstart- your car. But why do you need to do that?

Your car requires a healthy battery to supply electrical power to the starter motor for cranking the engine. If the battery is weak or dead, it won’t drive the starter motor, and your car won’t start.

As a result, you need a donor car to help you start your car. You will use the battery power from the donor vehicle to start your engine.

Use the following methods to jumpstart your car:

If the engine starts:

But if the engine does not start:

If your car requires frequent jumpstarting, its battery may be weak. Take it to a technician for analysis and be replaced it if it cannot hold enough charge.

Video Guide: How To Safely Jump Start A Vehicle With A Dead Battery & The Correct Way To Hook Up Jumper Cables

Is the red wire always positive?

Yes. The red wire is always positive in DC power. It might mean a different thing in other applications or AC power systems like your domestic wiring system.

What happens if you reverse positive and negative wires?

Reversing positive and negative wires when jumpstarting your car will cause the sparkling and melting of the cable. The current gets high resistance, which generates a lot of heat.

What color do you hook up first on a car battery?

Always hook up the red jumper cables or positive battery terminals first. It prevents sparkling or damage if the red jumper clamp accidentally falls on the chassis. It is a safety procedure to save your car electronics.

How do you jumpstart a dead car?

The procedure for jumpstarting a car doesn’t change. If the battery is the problem and all other systems are functioning, find jumper cables and a donor car. Use the steps outlined in this article to safely jumpstart the car.

What is the difference between the red and black jumper cables?

Apart from the color of the rubber insulator, red and black jumper cables remain the same. They are only colored to help you connect them properly when jumpstarting the car. It minimizes the chances of reversing the terminals.

Do you take the red or black cable off first?

After jumpstarting the car, you take off the black jumper cable first. It is a safety procedure to save your car electronics if the red jumper cable or clamp falls on the vehicle’s chassis.

Do you turn off the car before disconnecting the jumper cables?

How long should you let a car sit with jumper cables?

Remove the jumper cables as soon as the engine starts. The running car engine should drive your alternator, which generates electricity to charge your battery and power your car’s electricals. But remember to remove the black cable from your car’s chassis first.

When jumpstarting a car, always connect the red jumper cables first. And after the car starts, remove the black jumper cable first. It simply means the first cable to be hooked becomes the last to be disconnected.

Once the engine starts running after jumpstarting your car, drive for 15-20 minutes to recharge the battery before turning it off.