Timing belt vs serpentine belt, what is the difference? It is possible to confuse the two, especially if you are new to the automotive industry.

Timing and serpentine belts are essential components of any car engine. The two are different but perform vital functions to keep the engine running without problems.

A timing belt is located inside your car engine and connects the crankshaft to the valve that controls air and fuel. That allows them to be in synchronism and ensures the engine runs smoothly.

On the other hand, a serpentine belt is found outside the engine. It drives many engine accessories through the main pulley connected to the crankshaft. These accessories include a water pump, alternator, radiator fan, etc.

Read on for detailed information about the differences between a timing belt and a serpentine belt, including a frequently asked question about these engine components.

Are Serpentine Belt and Timing Belt the Same?

No. The serpentine belt and timing belts are not the same. They are both engine components, and that’s how far their similarity goes. Let’s define what they are and their functions to understand them better. 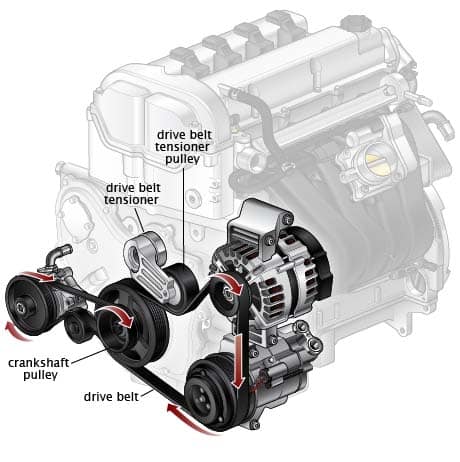 As the name implies, a serpentine belt is a continuous belt that snakes on the pulleys of various accessories attached to the engine. It is located outside. Hence, you can easily see and inspect it.

A serpentine belt drives accessories, including the alternator, water pump, air conditioning compressor, power steering pump, and radiator fan. It has V-shaped cross-sections to increase the grip of the pulleys.

Without a serpentine belt, the engine overheats and may stall. It is, therefore, crucial to keep it in good working condition and replace it when necessary. 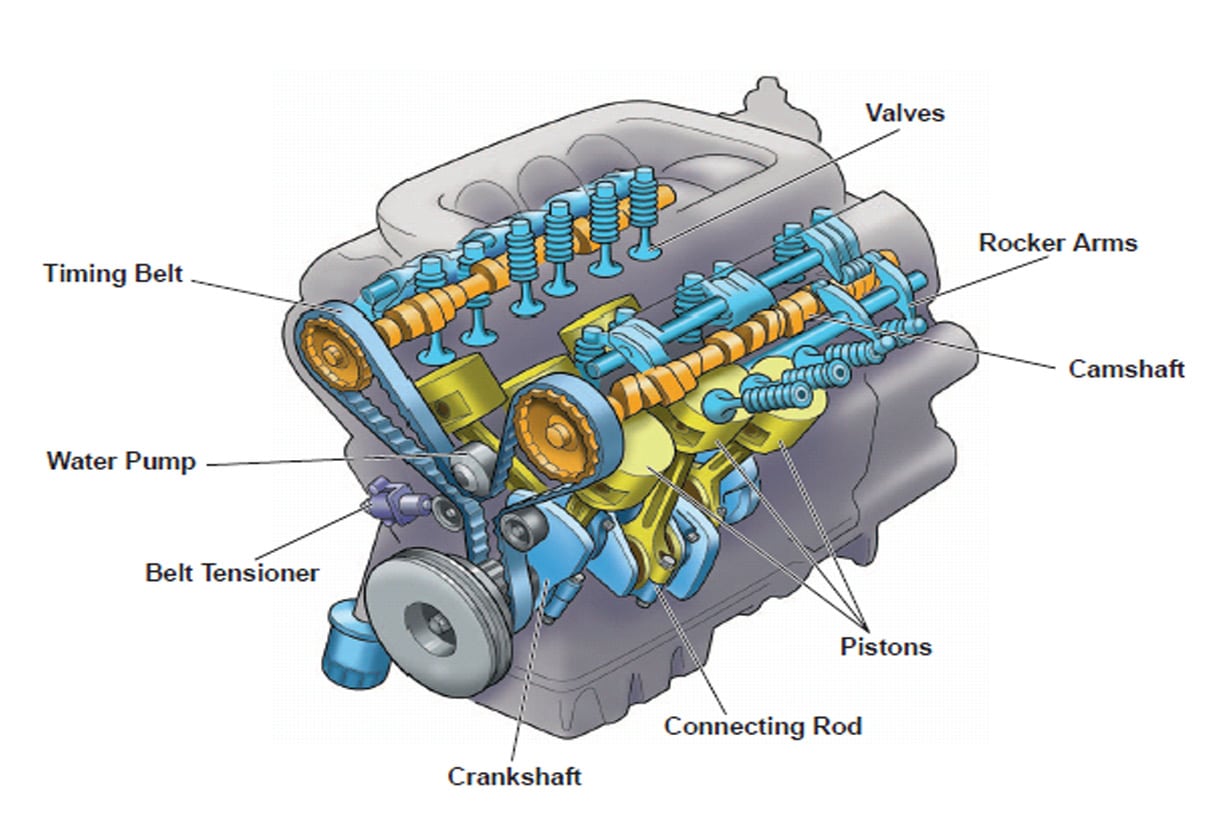 A timing belt is located inside your car’s engine. It connects the crankshaft and camshaft, keeping the two in synchronism.

The camshaft opens and closes the intake and exhaust valves in synchronism with the piston movements. That ensures they operate efficiently for a smooth running of the engine.

A timing belt has teeth similar to gears for precise control of the camshaft movement. This component is virtually the same in all engines, but the teeth pitch can vary depending on the engine size.

As the name suggests, a timing belt allows precise opening and closing of valves of each cylinder for the best performance. If it breaks, the engine will be mistimed. That lack of synchronism causes an engine failure, and the car breaks down immediately.

So, what are the differences between a timing belt and a serpentine belt? We will break it down to understand it better. They differ in their location, design and construction, purpose, cost, symptoms when damaged, lifespan, and other factors.

1. Location in the Car

On the other hand, a serpentine belt is found externally to the engine. It is readily visible once you pop up the hood. You will see it running through different pulleys on the engine block.

A timing belt and a serpentine belt have differences in design and construction. By visual inspection, you will see teeth similar to gears running across the length of a timing belt. These teeth allow it to lock to the gears of the crankshaft and camshaft for precise timing.

On the other hand, a serpentine belt has V-shaped grooves running along the belt’s lengths. These fit into the pulley grooves of various accessories for maximum grip.

On the other hand, most timing belts are made of neoprene or fiberglass-reinforced rubber. They don’t stretch like the serpentine belt and are much stronger to withstand high heat and oil contamination inside the engine block.

As mentioned, a timing belt connects the crankshaft to the camshaft, allowing precise timing between pistons and intake and exhaust valves.

A serpentine belt is found externally on the engine, where it drives accessories such as the radiator fan, alternator, water pump, oil pump, etc.

The timing belt and serpentine belt should be in good condition for the engine to run smoothly and efficiently. Without any, the engine will overheat, run erratically, or stall.

A timing belt and a serpentine belt are made of different materials. As a result, they have different lifespans.

Regardless, inspect the timing belt and serpentine belt for damages and replace them immediately.

Serpentine Belt vs Timing Belt – What Is The Difference (Video Guide)

Since serpentine belts and timing belts perform different functions, expect your car to show various symptoms if any of the belts is damaged. So, be keen to avoid misdiagnosis.

A faulty serpentine belt is associated with the following symptoms:

A faulty timing belt has the following symptoms:

Note that these signs can be caused by other failing engine or vehicle components. They should not be definite indicators of a faulty or damaged belt. Learn more by diagnosing the vehicle for stored trouble codes and other approaches.

How To Replace Serpentine Belt And Timing Belt

A serpentine belt is located outside the engine block, making it much easier to replace. You can do it yourself in your garage if you are a DIYer with auto repair tools.

The location of a timing belt inside the engine block makes it a bit challenging to replace. You need to unbolt the timing cover to access it, which may not be straightforward for a DIYer. But if you are advanced, you can still replace it in your garage.

Otherwise, call a professional mechanic to replace your timing belt and serpentine belt. They require expertise and should be of the appropriate tension.

Replacing a serpentine belt won’t eat much into your pocket compared to a timing belt. It is cheaper and easier to replace.

Read More:  Why Can't You Patch A Tire Shoulder [Explained]

A serpentine belt replacement costs about $300. This includes a labor fee of between $70 and $150 and parts cost of between $15 and $70. Remember, you may also need to replace belt tensioners and pulleys only if they are.

On the other hand, timing belt replacement costs from $500 to upwards of $1,000. This also includes $50-$100 for the belt and the remaining amount for labor and other engine components you may also need to replace. A damaged timing belt can also damage pistons, pulleys, or valves.

You can save when replacing your timing belt if you do it yourself. As you can notice, your higher percentage is in labor fees.

The chart below is an overview of the differences between the timing belt and the serpentine belt.

Is a timing chain better than a timing belt?

No. No debate exists between the timing belt and the serpentine belt. These are all vital components of a car’s engine with different functions. Without one, the engine can’t run, and the car turns into junk metal.

What happens if the timing belt breaks while driving?

A timing belt is crucial for running the engine. It may stall if the belt breaks. That is because the piston and valves fall out of synchronism. Your engine begins to shake or vibrate violently and stops once it can’t keep up.

Can I start a car without a serpentine belt?

Yes. You can start your car without a serpentine belt because it is not part of your car’s engine starting mechanism. The engine can crank and start running, provided you have enough electrical power to run the starter motor. However, it will overheat and can suffer severe damage. Just keep off from starting your car without a serpentine belt for safety.

Read More:  How Much HP Can Spark Plugs Add? [An In-depth Analysis]

Can I replace the serpentine belt or timing belt myself?

Yes. You can replace serpentine and timing belts in your garage if you have auto tools. However, replacing a timing belt is a bit challenging and requires skills to achieve. Also, ensure you get the belt tension right when installing a new one.

The timing belt tensioner should apply a slack tension of about 10%-30% of the belt tension required to move the belt. It should not be too tight or loose. A Loose timing belt slips or falls off, while a tight one causes loud engine noises when running.

How tight do you tighten a serpentine belt?

Like the timing belt, a serpentine belt should not be too tight or too slack. Most vehicles require that the serpentine belt not be pressed down for more than ½ an inch. If it does, the belt is too loose and may slip or fall off. Also, a tight belt causes loud engine noise and may break prematurely.

When should I replace my timing belt?

A timing belt lasts between 60,000 miles and 100,000 miles. However, you should inspect it regularly and be keen on the possible symptoms to know if it is damaged. Replace the damaged timing belt immediately to avoid costly engine damages

When should I replace my serpentine belt?

A serpentine belt can also last between 50,000 and 60,000 miles, but others can go up to 100,000 miles. That depends on the manufacturer and other factors. Once again, inspect the serpentine belt every time you service the engine and replace it if damaged or worn out.

What happens if belt tension is too high?

A high belt tension causes more strain on the pulleys and the belt itself. The result will be louder noises from the engine than the usual and premature failure of the belt and related engine components. Always ensure both engine belts have the recommended tension.

Timing and serpentine belts are all engine components, but they have many differences. Their location, design and structure, purpose, lifespan, and cost differ. Regardless, they are both vital for the effective operation of the engine.

Keep the serpentine and timing belts in good condition and replace them when worn out or damaged. If you don’t replace them on time, they can break and cause more engine damage.

Fortunately, you can replace them yourself in the garage if you are a DIYer. But if you don’t have the experience, take your car to the dealership or contact a mechanic.