So, socket wrench vs. ratchet. Which one is better? If you’re caught between two split decisions, you’re not alone. In this article, you’ll learn about these tools to help you decide which is the best for you.

This article includes descriptions of each tool, different types, uses, and included features. You will also be reading about the right time to use each tool and a few frequently asked questions.

Ratchets and Sockets: What Is It and How Does It Work? (+ Video Explained)

Sockets can be used with breaker bars as well as wrenches. They can also be compatible with ratchets. Smaller fasteners can fit into smaller sockets, while larger drive sockets can fit into larger sockets.

Ratchets normally do not have many attachments aside from the gears that allow them to turn faster with fewer rotations. Some locks facilitate the attachment of sockets to ratchets. It also holds fasteners more firmly and moves faster than geared drives.

Ratchets are most commonly used with a geared drive, which has more teeth and allows you to work with a minor swinging motion. Roller-bearing gearless ratchets are also available. They require far less movement to move the fasteners.

Other ratchets may have locks on the sockets, keeping them from dropping. It also assists with fastener adhesion. To help you in limited spaces, you can change the handles of flexible ratchets.

Chemically, they are nearly identical, with the only difference being a 0.5 percent weight difference in the form of molybdenum or vanadium. As a result, we can’t determine whether chromium-molybdenum or chromium-vanadium is superior.

Both the socket and the ratchet are available in a variety of sizes. There will always be a ratchet or socket for it, whether it’s a little nut or a giant industrial bolt.

What Is A Socket Wrench? 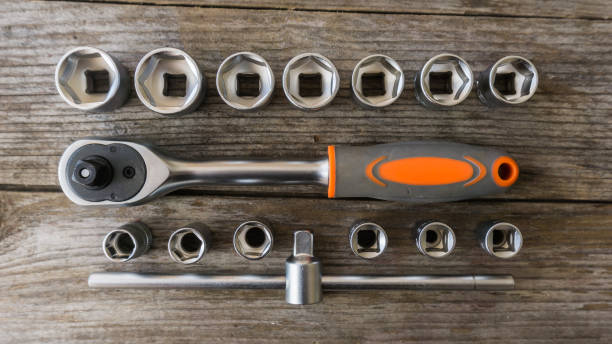 To start things off, what is a socket wrench? A socket wrench is a tool that makes it much easier to rotate nuts and bolts than a regular wrench. The ratcheting feature keeps the wrench in place on the bolt and removes the need to reinsert it after each turn.

Read More:  How to Remove Bit From a Dewalt Impact Driver

This is especially critical when working with a limited amount of area. Socket wrenches are so helpful that mechanics, carpenters, and various other merchants keep them on hand. Sockets are available in both English and metric sizes, and many socket sets have both.

They are equipped with attachments that allow the head to swivel while in use. Flex-head socket wrenches aren’t as popular as ratcheting socket wrenches, but they come in handy in tight spaces.

A nut driver is another sort of socket wrench. Nut driver socket wrenches are hand-held, manually operated screwdrivers with a socket head. They don’t have a Phillip’s or a flat head. Instead, they have a socket head that allows them to be used in hexagonal head fastening.

How To Use A Socket Wrench?

If you’re interested in watching a video instead, here’s a video on how to use a socket wrench:

This video explains that it is a hand tool with a ratcheting mechanism on the head that is used to tighten bolts. A square nub known as the drive connects the ratcheting component to various sockets. Nuts may be loosened or tightened using the ratchet. While turning the wrench handle, the ratchet maintains the socket in place. 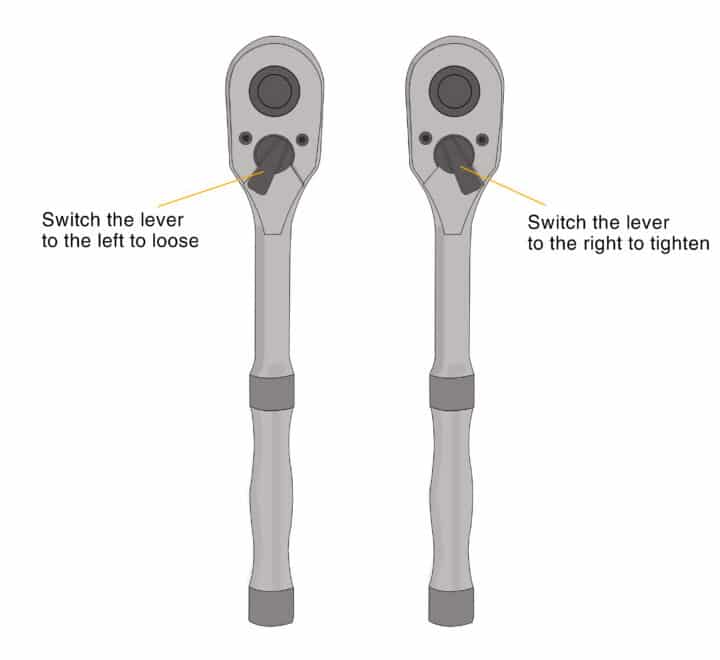 When you pull one way, a ratchet holds in place and releases if you pull the other way in the opposite direction. Without re-fitting and removing the wrench, you may swiftly tighten a nut or bolt with the ratchet. The ratchet handle provides you a lot of wiggle room when tightening and loosening things.

You can generate a lot of torque with this kind of leverage. Ensure you’re using the correct socket size for the nut or bolt you’re working with. A nut or bolt might quickly be stripped if you use the wrong size due to the high torque.

What Is A Ratchet?

A ratchet is a tool that provides continuous linear or rotary motion in one direction while restricting motion in the other. Ratcheting socket wrenches are generally known as ratchets.

You can easily push the handle backward with a ratchet, but with a socket wrench without a ratchet, you must lift the socket of the bolt or nut and move the complete tool combination to realign it.

Depending on the context, a socket wrench can be anything from a breaker bar that accommodates a wide range of socket sizes to a wrench with an incorporated socket.

In terms of, ratchets are classified into two sorts based on the geometry of their heads. The design of the head frequently determines the type of tool that does the ratcheting.

There are two sorts of ratchets:

A round-head ratchet’s head is, well, round. Pear-head ratchets are ratchets with rounded heads. Below the head-shape category is a sub-category that describes the ratchet’s functionality which includes:

Ratchets with pear or round heads come in both flexible and fixed variants. A pivot is built inside a flex-head to let you reach difficult-to-reach fasteners.

In fact, ratchet heads have a flex point that allows them to be positioned at an angle distinct from the rest of the handle. Fixed-head ratchets do not have this feature.

Round-head swivel ratchets have swivels attached to them in such a way that the drive turns 270 degrees. They’re bulky, but they’re beneficial when you need them. When extra torque is required, they effectively shift from a ratchet to a nut driver to quickly remove the bolt.

How To Use A Ratchet Wrench?

If you got yourself a ratchet wrench and don’t know how to use it, you’ve come to the right place. Below are steps to help you out with that. Looking for a video to learn how to use your ratchet wrench? Check out this video:

Remember to always use the right socket size for the fastener you’re turning. Your socket and the fastener might both be damaged if the wrong size is used.

A Socket Wrench Or Ratchet, When Should You Use Them?

Depending on the type of nut, you may use a ratchet one time and a socket wrench the next. You are always changing your tools while working.

However, if you know how to use both tools efficiently without constantly moving back and forth, you may save a lot of time. Working with nuts and bolts takes time, but it doesn’t have to. To achieve the best results, you must learn which tool is best for each activity and how to combine them.

Is A Ratchet Wrench The Same As A Socket Wrench?

No, they are not the same thing. But they both tighten and loosen bolts similarly to a standard wrench. Ratchets and socket wrenches are particularly well adapted to certain jobs.

Can You Use An Ordinary Wrench Instead Of A Socket Wrench?

You most certainly can. Using a tool like a socket wrench only makes the workflow easier, but it’s not required. You could say it’s a standard tool in any workshop.

What Is The Difference Between A Torque Wrench And Ratchet?

Torque wrenches are a type of wrench that is widely used in automobile work and other situations when a precise torque setting for a specific bolt is required. Ratchet wrenches are a sort of tool that is used to loosen and tighten fasteners.

What Is The Most Common Socket Drive Size?

Are More Teeth On A Ratchet Better?

If the number of teeth is higher, the less the handle must move to engage the next tooth. That implies that if you’re in a pinch, you’ll be able to disassemble items that you wouldn’t be able to with a ratchet with a broader swing arc.

Right Tools For The Right Job

The hybrid design of a good ratcheting wrench set between a socket wrench and a combination wrench is a popular choice since it provides mechanics with the benefit of ratcheting motion where sockets are too large.

There will be times when a socket will not fit, and the head of a ratcheting wrench will be too large. Simply flip it over to use the open-end wrench side. The good news is that it eliminates the need for a combination wrench set as well as ratcheting wrenches entirely.