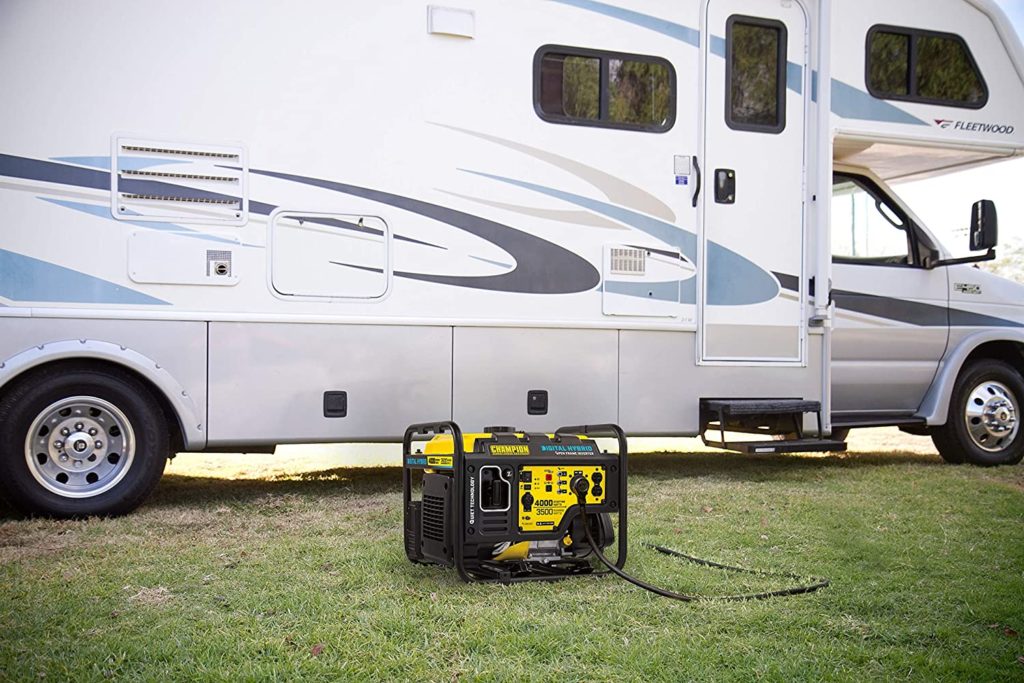 Power outages are one of the last things we want to happen. It can happen abruptly, turning a perfectly good day into a nightmare.

Your generator will be your lifeline if ever power goes out.

But what kind of generator do you need? Generators are not exactly one size fits all. Like all other products, there are generators that cater to different needs.

What to Look For?

Before selecting a generator, you have to know your needs first. You can’t just barge into a hardware store and buy the first model you see. You need to come in prepared, and here are a few things that you need to consider when looking for a generator.

Generators differ in how much power they produce. With more power, the more devices it can run and the more convenient for you if there’s an outage.

However, you need to consider how much power you need too. You want to power your important appliances, but should you stop there?

Normally, 5000W would power enough of your major appliances to keep you running, and with more power to spare. However, even units with as low as 3000W can be more than enough for a small household.

To be sure, check how many watts your appliances need, and you can get an idea of how strong of a generator you are going to need.

With the power output covered,  it is also important to note that there are several types of generators. Each generator has its unique functions and features. Here are the main types to help you get an idea of which generator is best for you.

A standby generator is the standard generator you would want if you’re not going anywhere. This device provides the best kind of protection as it is automatic. You never have to switch it on manually because it does everything automatically. Power outages won’t be an issue because you immediately regain power.

It can also run on almost any sort of fuel, depending on the model. Let it be propane or gasoline, you won’t have difficulty refueling it.

A useful feature is that it also tests itself automatically every week to see if it works fine just in case of power outages. Standby generators are great for emergencies and places that need power running continuously.

The selling point of portable generators is that they are portable. This makes it great to take in and out of places and can be easily packed onto the back of a truck or a van. It also runs on gasoline or fuel so it is  cheap to fund.

The big difference that portable generators have is that they have sockets where home appliances can be plugged. In terms of appliances that can be powered, it can run almost just as well as a standby generator, the difference? Portability.

Instead of starting at full capacity, they gradually increase depending on the need. This makes it more fuel-efficient and better!  These are also portable so think of these as more high-tech and efficient portable generators.

Read More:  Can You Drill into Concrete with an Impact Driver [Answered]

Especially if you’re new to generators, having a convenient startup mechanism makes it easier to operate your generator and can save you time when you finally get the chance to use it.

If there is another must for your generator, it is a control panel. Control panels are useful because, ideally, it will have all the necessary information you need to know about the generator while it’s running.

This information can range from power output to fuel capacity so that you’ll never be guessing what’s going on with your generator. If any problems arise, some models have control panels that alert you of these issues.

Now that we have laid down the basics of what to keep in mind when choosing generators, let’s take a look at these two models to see how they stack up against each other.

The Westinghouse brand has a history of 130 years in the industry, so it is no stranger to the craft. The company is known for the quality of its portable generators.  However, it has also started to make inverter generators as well.

A trademark of the company is that they have reliable generators that are easy-to-use and can last for a long time.  The iGen4500 inverter generator is one of Westinghouse’s best inverters.

The iGen4500 has 3700 running watts and can peak up to 4500 watts. This can serve most of your essential household appliances in case of an outage. It has a 3.4-gallon gas tank, which helps power your appliances for up to 15 hours at 50% load. The device also consumes 0.19GPH (gallons per hour).  It can give you power for quite a long time.

Furthermore, the generator emits a sound of 52dBA that’s as silent as it gets!

It also meets both EPA and CARB standards.

The iGen4500 is very easy to use with manual, electric, and remote startup. Gone are the days that you would need have to work on recoil start before enjoying backup electricity. But, if the electric or remote start is not working, the iGen4500 still has the regular recoil start to help you get going again in no time.

A generator that has roller board wheels, telescopic handles, and carry handles? That is the definition of portability! Especially when you consider You can almost bring its measurements of L24.5″ x W17.5″ x H20.5″ with a weight of 98lbs, that’s pretty neat. What makes it more impressive is that it has an RV outlet that can let you take it out on a trip.

The iGen4500 doubles up on convenience with an LED display that is easy to understand and tells you all the important details. It can give you information about fuel, power output, and even the time you have left with the generator’s current fuel consumption!

Read More:  What Size is a Number 7 Drill Bit? [A Simple Guide]

It even has enough space to tell you the total power output, fuel output, and even voltage. With the LED display, it is much more convenient.

The Champion 76533 is a good option if you want a strong inverter portable generator for your RV.

The Champion 76533 has 3800 running watts and 4750 starting watts. It also has a 3.4-gallon fuel tank. This generator can run for up to 9 hours at 50% load, which is around 0.38GPH consumption. It is also dual-fuel, which means you can power your devices using either propane or gasoline.

The 76533 is a high-powered generator, so you will expect that it will be noisy. However, it can only get as loud as 68dBA, which is right about the noise a normal human conversation makes.

This generator also passed EPA and CARB certification to ensure its efficiency and safety.

The Champion 76533 has the electric start feature. However, it does not have remote start. Either way, it is better than your regular recoil start.

The Champion 76533 has a built-in LED screen for monitoring your output, hertz, voltage, and run times with its Intelligauge. But, it would have been better if had a dedicated fuel gauge.

Now, let’s put the Champion 76533 and Westinghouse iGen4500 against each other.

Furthermore, it is also important to note that the Champion 76533 is dual fuel, meaning it can run on propane or gasoline in contrast to the iGen4500, which can only be run on gasoline. While they both have good efficiency, the Champion 76533 has the edge with the dual-fuel feature.

When it comes to noise levels, the iGen4500 has the edge with just 52dBA operating noise compared to the 68dBA from the Champion 76533.

Both devices are EPA and CARB-certified, so there is no issue with efficiency and safety.

In terms of output, the Champion 76533 provides you with a difference of 100 rated watts and 250 peak watts, which aren’t much but can still make a difference.

The two generators are neck-to-neck in size and weight. Both models come with wheels and multiple handles that make them easier to transport. However, the iGen4500 is slightly lighter than the Champion 76533 with 98lbs in contrast to 119lbs from the Champion.

Both the iGen4500 and Champion 76533 have electric and recoil startup. However, the iGen4500 is better in this regard because it also has a remote start, so you don’t need to walk up to it to turn it on.

Read More:  17 Types of Sanders and Their Uses for Home Projects

Both models have LED displays that inform you of the things you need, like fuel consumption and oil levels. However, the iGen4500 also has a separate fuel gauge, which is quite helpful than having it all on the display panel.

You might have some more questions regarding generators that haven’t been answered by the information above. Here is some more information that you might find useful

What type of fuel is best?

It depends on your needs. In terms of cost, gasoline is the cheapest and also the most common. People can opt to use propane as well for cleaner emissions and lower fuel costs in the long run, but propane-powered generators tend to have higher prices.

Diesel works fine as well, just make sure that it is compatible with your device so you won’t end up breaking it as diesel-powered generators are known to produce unstable power.

Can I keep my inverter generator inside the house?

Never keep your inverter generator running inside the house since it produces deadly smoke that can kill people inside the house. If you are storing it, that’s fine, but make sure it is in a cool and safe place away from children. Furthermore, make sure that the fuel tank is empty to prioritize safety.

How long does a generator last?

A generator’s lifetime is parallel to how well you maintain it. The more attention you pay to its maintenance, the longer it will last. Some well-maintained generators even last for decades and more. If generators break down early, it’s almost always because of misuse and lack of maintenance.

What happens if I overload my generator?

Don’t attempt to make your generator supply more power than it can at the risk of breaking it due to overloading. Overloading happens when the wattage needed by the appliances plugged into your generator exceeds the running wattage. If this happens, then you’re risking your safety. To avoid this, try to look for models with overload protection.

The iGen4500 and Champion 76533 are equal in most respects, with each generator having a small edge in some areas.

Furthermore, while they both have excellent fuel consumption, the Champion 76533 also beats the Westinghouse because of its dual-fuel feature that allows it to work using propane. If you don’t know, propane is more efficient to use than gas and has cleaner emissions.

Yes, the Westinghouse iGen4500 is a good generator, and we can’t blame you if you already bought it.