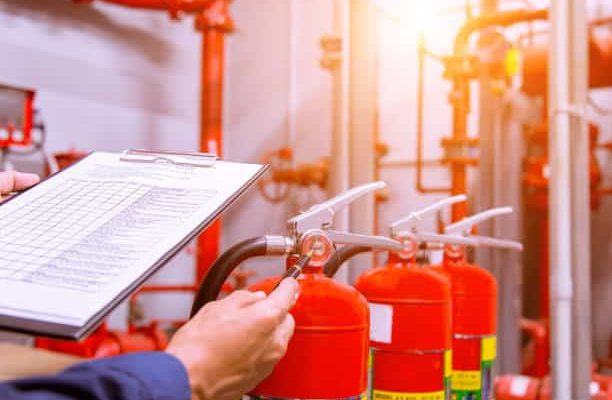 It is important to own a fire extinguisher. This is because of how good it can help in putting out a small fire before it becomes too big to handle.

When you look at a fire extinguisher, you are likely to see several labels on it. This includes A, B, C, D, and more.

The fire extinguisher is labeled based on the type of fire it can help put out. This includes flammable liquids, wood or cloth, metal sources, and electrical.

Seeing all these labels can often confuse you as you might not know what they mean. Not to worry as we will look into the various labels you can find on a fire extinguisher and their means so that you use it appropriately.

Classification Based on Fuels

Below are the common types of classifications and their symbols. 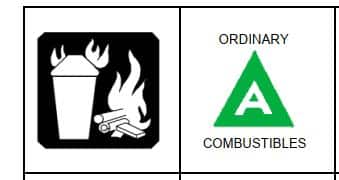 Class A fires mostly involve combustible materials solid in nature but not metals. Such include plastics, wood, textiles, and paper.

These class A fires are the ones that would generally leave Ash once the fire is put out or has died down. They will have a green or metallic symbol as shown in the image above. 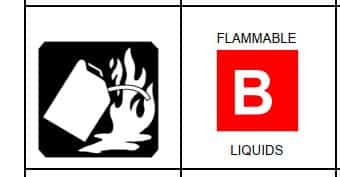 This type of fire involves the burning of flammable or combustible gases and liquids. This would include diesel fuel, paint, gasoline, propane, and paint thinners.

Such types of fires would involve materials that generally boil or bubble as they burn. Its symbol can be red in color to show how dangerous it can be. 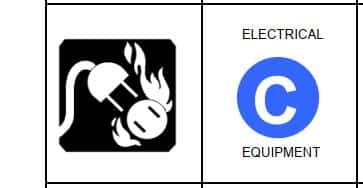 Keep in mind for this fire to be considered class C, then it has to be plugged in. Such includes fires coming from fuse boxes, appliances, machinery, and circuit breakers.

You can tell that such fires are because of an electric current, hence the class. The symbol is blue in color. 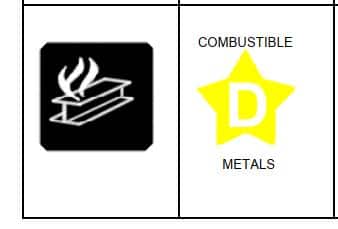 It might not always be possible to come across class D fires. Yes, not many metals you interact with daily are combustible. This is only true if you work in a lab.

Some of the combustible metals include sodium, titanium, magnesium, and potassium. For such fires, there is a need for special extinguishing agents such as foam to fight the fire. They would have a yellow color as the symbol. 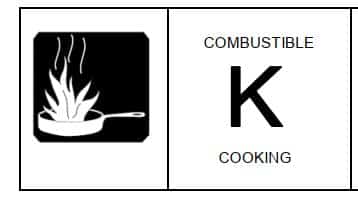 This is another symbol to take note of when trying to understand the type of fire extinguisher. The class K fire is because of burning cooking media such as animal or vegetable oils and fat. These fire extinguishers would have a letter K for ease of identification.

Here is a video on the classes of fire 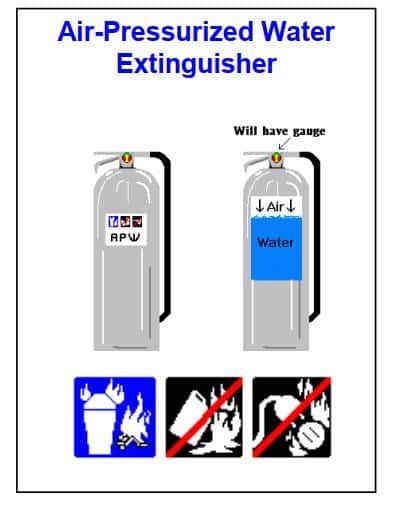 These fire extinguishers will have water filled up to two-thirds of their capacity and then pressurized using normal air. As for the water, it is just normal tap water. It is the pressure that will help in extinguishing the fire.

Some people can refer to such a fire extinguisher as simply a big squirt gun. These extinguishers stand 2 feet tall and can weigh up to 25 pounds when full.

The APW is designed for Class A fires only. You should never use it for class B and C fires. This is because water can easily help spread the fire because of flammable liquids.

As for class C fires, water is a good electrical conductor. You can see that in such a scenario, it can lead to electrocution if not careful. Make sure the electrical equipment is first unplugged before using an APW extinguisher. 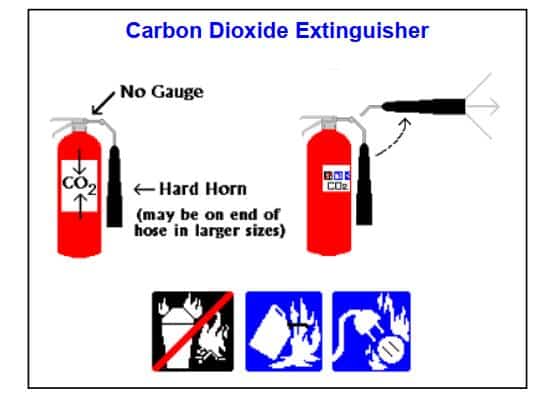 Carbon dioxide or CO2 extinguishers are filled with non-flammable carbon dioxide liquid. The liquid escapes in a gas form because of the extreme pressure in the tank. That is why might think it is gas, but it would be stored as a liquid under high pressure.

The CO2 extinguisher does not have a pressure gauge but has a horn. When you press the trigger, it shoots out dry ice and the CO2 gas comes out.

Read More:  How To Cut a Ceramic Tile That Is Already Installed [5 Steps]

The cylinders are mostly red and can vary in terms of size from 5 pounds to 100 pounds or even more.

This fire extinguisher is meant only for class B and C fires.

Carbon dioxide will displace the oxygen around the source of fire making it die out. Also, the gas can be cold meaning it will cool down the hot burning fuel.

Take note that it is ineffective for extinguishing Class A fires as it may not be able to displace more oxygen to put out the fire. Also, the Class A materials can also smolder and later re-ignite if you use this method. 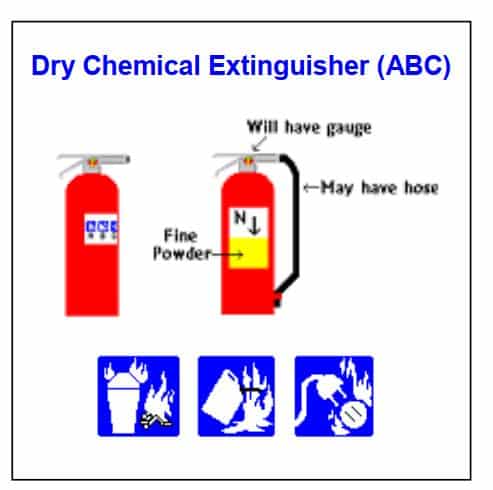 With the various types available, it is important to identify which type of fire first and use the correct fire extinguisher. A good example is mistakenly using BC for class A fire. Ensure the fire type is included first.

These fire extinguishers work by coating the fuel source with a layer of dust thus cutting oxygen to the fire source.

The powder can also interrupt the chemical reaction of the fire. As a result, such fire extinguishers would be quite effective at their jobs. 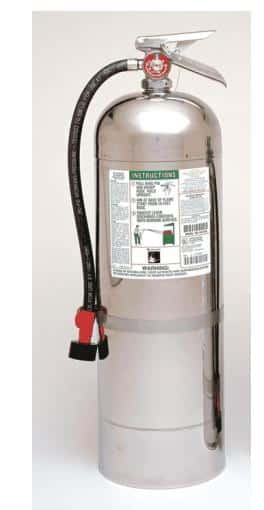 These solutions are quite good at suppressing fire in kitchens. That is why you can expect to find such a fire extinguisher in restaurants.

When you use such fire extinguishers, they spray an agent in form of fine mist. The mist cools the flame front while the potassium salts will cut off oxygen from reaching the cooking oil that is already burning. Expect to see a layer of foam over the burning surface.

The misting also helps to prevent the splashing of the hot oil. Remember that it does not work for class B fires.

This video talks more about types of fire extinguishers

Fires can be dangerous generally and that is why you need to take various considerations to avoid endangering yourself as you attempt to put out the fire. When you discover a fire outbreak, start by;

Before you can start fighting the fire, it is also good to know what is burning. The last thing you may want to do is use the wrong fire extinguisher on the fire source. In case you are unsure, let the professionals handle it.

When should you not fight fire?

If the fire is spreading so fast beyond where it started. It means that you can end up with too much fire you cannot handle. Make sure to get yourself to safety first. Also, if you do not have the right equipment to fight the fire.

How do you know if the fire extinguisher is still valid?

Make sure to look at the tag on the cylinder. It will have the year and month indicated. The fire extinguisher needs to be inspected also to ensure it is still in good condition.

What are the main types of fire classes you should know?

The main classes of fire include A, B, C, D, and K. Make sure the fire extinguisher you use is rated for the specific classes of fire. Some might work for one class of fire while others have several. This information will be indicated on the cylinder.