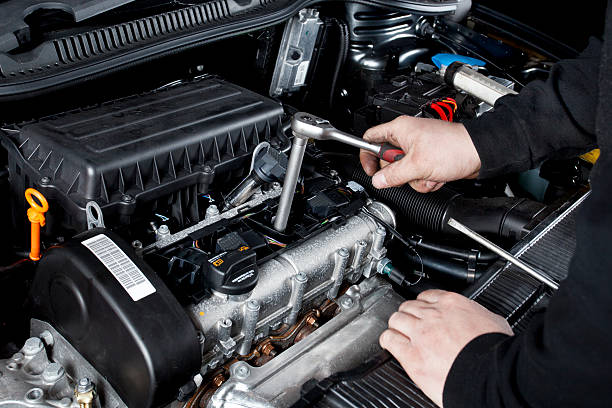 Spark plugs are installed or threaded in the cylinder head alongside the intake and exhaust valves.

If you have over-tightened a spark plug, it can:

Such an over-tightened spark plug damages the cylinder head, and the thread of the spark plug can lead you to fix or find replacements for these parts.

Fuel Combustion On Your Car Engine

When you burn fuel on your car’s internal combustion engine, the fuel combines with air and passes to an intake valve going to the cylinder.

As the air-fuel mixture moves down the cylinder, the piston will compress this mixture, and then the spark plug will ignite it.

The ignited or combusted air-fuel mixture will expand and push the piston downward.

When the piston reaches the top part of the cylinder near the valves, the intake will release the new set of air-fuel mixture to repeat the four-stroke cycle of the internal combustion engine.

Read More:  Can You Use a Torque Wrench as a Breaker Bar?

The four-stroke cycle, as it is called because of the number of strokes made to burn fuel, which is consists of:

Two strokes of the piston (upward and downward) consist of one revolution of the crankshaft.

The crankshaft is measured through revolutions per minute (rpm) or the number of rotations it makes in a minute. At 5,000 rpm, the crankshaft consists of 83 rotations per second.

What Is A Cylinder Head?

The cylinder head is part of the internal combustion engine working with the other parts to burn the fuel in your car.

It is mounted on the cylinder block, which functions as a support structure for the engine cylinder. It is made of aluminum metal covering the top part of the cylinder or the chamber for burning the fuel.

What If The Spark Plug Is Loose?

If the spark plug gets loosened or is tightened loosely, your car can have poor engine performance, detonation, and dead cylinder.

Spark plugs that are not tightly screwed into the cylinder head can make misfires, slow acceleration, and slower to start the engine.

Due to loose spark plugs, detonation, which refers to the spontaneous combustion inside the engine, can encourage pre-ignition or early ignition of a spark plug before the air-fuel mixture can even be compressed.

The pre-ignition is due to the spark plug’s contact with the hot surface. Such detonation can lead to engine damage for unsynchronised functions of these components.

The loose spark plugs could pop out, with nothing to ignite the air-fuel mixture. A cylinder with an air-fuel mixture not combusted can decrease and eventually lose the engine power.

You may notice a cylinder not working if it has also increased its vibrations.

How To Change and Install Spark Plugs?

Here is the step-by-step of a safe installation of spark plugs into the head cylinder: