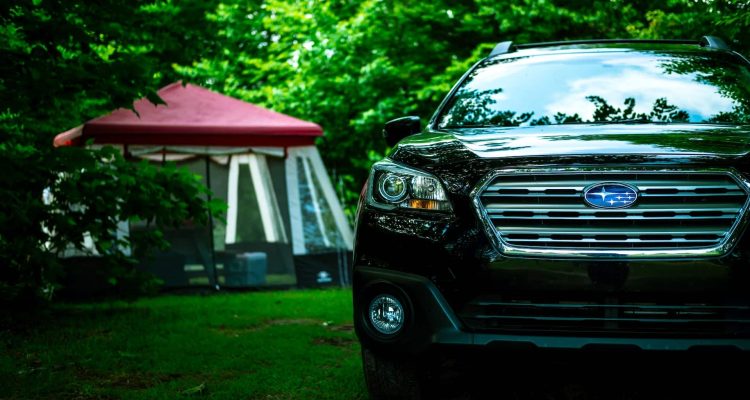 Subaru is widely known for coming up with exciting cars that people enjoy driving. This includes even the WRX and STi models that perform better than the base models. However, do you know where Subarus are made?

Subaru has its base of operations in Ebisu, Tokyo, so you can expect to find most of its vehicles being made in Japan. However, Subaru still has several other plants worldwide, including in the United States and Europe.

Understanding Subaru’s history can generally help you know how far it has come, plus the current areas of operation.

Subaru started operations as an Aircraft Research laboratory in 1915. At the time, it was called Fuji Heavy Industries.

It is the CEO of Fuji Heavy Industries, Kenji Kita, that coined the term Subaru when he wanted to introduce the car development branch of the company in the 1950s.

The first car that Subaru ever made was in 1954. It was mostly marketed in Japan. It is until 1968 that the company now entered the US market.

This included bridging their Subaru 360 model. Not many people liked it as some called it cheap and ugly.

In 1970, the company introduced the Subaru Star, and people loved it. It was generally better looking and ushered in the era when people started to enjoy the small Japanese cars.

The car came with more practicality, functionality, and value.

Subaru remained unstoppable for a while in the 70s. We saw it even introduce a 4WD Subaru station wagon. This is a nice design that people loved to the point the company is still offering the wagon today.

The 80s were not bad for Subaru either. This was when Subaru introduced the BRAT, which was quite interesting.

Well, some loved it, while others hated it. But it was a design that would influence a lot of car designs, especially in Australia.

There is a lot to learn about Subaru, which we will do as you continue going through this guide. We will see how it has improved in manufacturing technology, the top models people buy, and so much more.

As of 2016, Subaru was among the few companies in Japan, with over 75% of its cars made in Japan and then sold internationally. That shows its deep heritage in Japan.

The main Subaru plants are located in Ota, Gunma Prefecture, Japan. The locations include;

Subaru’s success has also been attributed to having more plants in different parts of the world. The most notable is in Lafayette, Indiana. It is referred to as the Subaru of Indiana Automotive Inc.

The Lafayette plant is responsible for supplying the Subaru models to North American markets. It has an impressive output of around 1,000,000 vehicles per year.

Here is a video showcasing how Subarus are assembled

In 2019, Subaru opened a production plant in Bangkok, Thailand, after going into a joint venture between Subaru and Tan Chong International. The plant mostly handles truck manufacturing.

The Subaru markets are largely in Asia, the United Kingdom, Australia, and United States.

In Asia, we only know of Japan being the biggest market for Subaru, but there is more, actually.

Among the Asian countries, Subaru operates include Singapore, South Korea, Thailand, and others. You would easily find a dealership in various Asian countries dealing in Subaru vehicles.

Subaru of America was established in 1968 and has continued to be one of the most popular dealerships for Subaru models.

It is vital to look at the popular Subaru models to see what is possible to get with the car brand. Here are some of the options;

The Subaru Forester is among the most loved model by the brand. It is liked for having a higher ground clearance which is good for driving over different road conditions.

It is similar to the Outback model, only that the Forester is raised. So, the next time you are going for a fishing or Kayaking trip, this could be a nice model to consider.

The Ascent has an all-wheel drive system like other Subaru models. It is generally a large car that can fit a whole family.

Most people take the Ascent to different camping spots over the weekend and drive kids to school during the week. Such flexibility is what makes it popular.

If you want something sporty, then consider the BRZ model. It is about improving the thrill of driving a sporty Subaru.

It has an identical structure to the Toyota 86, which is also fun to drive. As much as it does not have too much power and torque, it is still among the most affordable sports cars on the market.

It seems Subaru cannot decide whether the Outback should be a station wagon or an SUV. Looking at the 2019 model going forward, you should see that it is relatively bigger.

The company has also improved the overall haul and tow capacity. The best part is how it handles different terrains, making it a good adventurer’s car.

Whether it is the WRX or WRX STI, these are for those who enjoy the performance of Subaru cars.

The company has continued to improve the performance of these models to make them good for racing around the WRC and also just the local circuits. They can be collector’s items if maintained in good condition.

There are many other models we cannot discuss, but be sure to often find a Subaru model that does a good job of fitting your needs for one.

This video looks at the common Subaru models in the market.

Is it Good to Buy a Subaru?

Subaru does not make that many car models compared to brands such as Toyota, but you would find many people wanting a Subaru. Why is that the case?

One thing you will notice about Subaru is that it has a great car culture. The car culture will likely attract more people to consider getting a Subaru even though it was not something on their minds.

Going through social media, you should see how the car groups organize meet-ups and how they enjoy preserving their cars.

People find that it is possible to get a car model that they want from Subaru that will be good also for different uses.

Subarus might not have the most exciting interiors compared to its German counterparts. However, it is hard to find people complaining about the interior breaking apart only after a few years.

Also, those who mostly buy these cars are not worried much about interiors considering they might take them skiing and dings might be inevitable.

Subaru is known for making the best all-wheel drive system. This is thanks to their vast experience in the sector.

So, if you want a vehicle that can handle all the tricky snowy conditions, Subaru has your back. The symmetrical AWD is not just for snow but also for other conditions you might be driving over.

Rally success is another reason you find more people wanting to own a Subaru. We have seen the brand compete in various championships and wear quite many. Right now, Subaru has 46 rallycross wins. This shows how well the brand makes rally cars that actually win.

Subarus generally give off a rugged nature. This can make people feel that Subarus would easily tackle anything.

Look at the newer models, and you will see that the rugged nature has also been maintained. Compare Subarus and other cars in the same price range, and you would notice that a Subaru would be better in ruggedness and usability.

The Subaru ground clearance has never been an issue. That is why you would not have a problem with such a car driving around on different roads.

Let us take Foresters, Outbacks, and Crosstreks as examples. They have better ground clearance than the RAV4; thus, you reach more places in a Subaru.

Other than the WRX, the other Subarus are considered slower than their counterparts. You might think this is undesirable, but such vehicles would be user-friendly and easier to control. They are also more predictable and better on your gas mileage.

Subaru is also about getting safely to your destination. That is why the company has the Subaru EyeSight Driver Assist Technology.

Right now, the company has equipped over 1 million vehicles with the system, ensuring that the drivers get to different places safely.

Some of the notable Subaru EyeSight features include;

Read More:  What Are Spark Plugs Made Of? [Main Parts]

We can see that having the Subaru EyeSight system is good and would be something you enjoy as part of the car’s safety.

The technology has received a high safety rating from top agencies such as IIHS, whose tests show that Subarus with this system is among the safest vehicles on the road right now.

Subarus are generally good cars and will be reliable for a long time. However, they will still have a few problems here and there depending on the model and year of manufacture. Some of these problems include;

So long as the issue can be identified and fixed in good time, you may end up enjoying using your Subaru for a long time.

Subaru as a brand has come a long way from making boring cars to now cars that can excite you while also remaining fun to drive more often.

The company might not have the fastest cars in the market, but you would find them safe, especially because of the Subaru EyeSight technology. We expect to see more advancements in technology from the company as it continues to grow.

Since Subaru has many car models, it is possible to find one that can work for you. That is what we have looked at above. Go ahead and get one even for a test drive to understand how Subarus handle.

How many plants does Subaru have?

Looking at the different models that Subaru makes, we find that these cars are generally reliable. Other than reliability, they are still safe.

Who are the biggest competitors of Subaru?

The main competitors of Subaru include Toyota, Honda, Ford, Nissan, and VW. They make vehicle models that compete with Subaru directly.