Drill presses are perfect when you’re assigned with a many repetitive tasks to do. Drill presses also ensure that you have consistent work and output each time. However, when we consider all the various brands and features available in the market as of the moment, it can be quite overwhelming to pick the best drill press for your needs.

Fortunately, we’ve picked five popular drill presses from WEN and Skil brand in order to help you narrow down your choices and make a much easier purchase. The listed drill presses here range from the 8-inch WEN 4208 for home workshops up to the WEN 4214 for manufacturing and production settings.

There are also drill presses feature in here that offer improved capacity with accurate lasers for extra precision. Without further ado, let’s review the highlights of each one to determine which drill press will suit your needs. 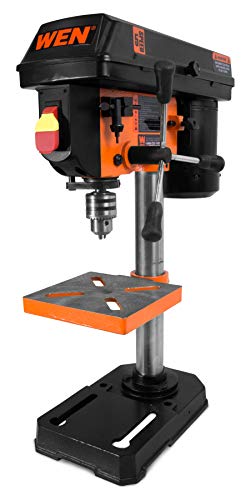 The WEN 4208 8-inch 5-Speed Drill Press is a great pick for novice woodworkers and home workshops. Because it comes with a ½ inch chuck, it is compatible with a vast range of bits. Additionally, its 1/3 HP motor is powerful enough for typical tasks. In fact, it can even drill a half-inch hole through a cast iron.

Its bevelling worktable tilts for up to 45 degrees either right or left. It also adjusts up and down too. In addition to that, it measures 6-1/2 inches square.

Furthermore, another basic feature to consider on this drill press is its throat or swing. That measures how far from the edge of the material it can drill. Aside from that, the WEN 4208 comes with an 8-inch swing from the center of its chuck to the support column. Meaning, it can drill through the middle of a disc that measures 8 inches in diameter, or 4 inches in width from the center of the material to the column.

If you’re looking for a drill press that has larger throat capacity, then you might want to take a look at the next drill press below. 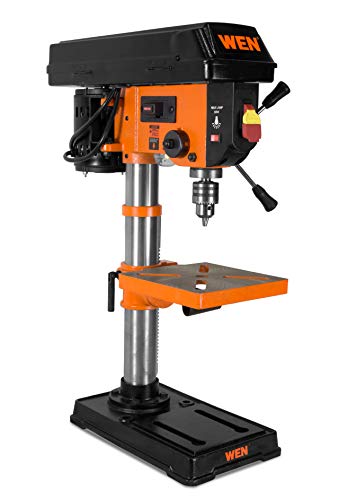 The most obvious difference you’ll notice upon comparing the WEN 4210 to the WEN 4208 mentioned above is that the WEN 4210 comes with a larger capacity for bigger projects.

First, WEN 4210 comes with a wider throat or swing which is ten inches. Additionally, you might also see that it is equipped with a pinion and rack height adjustment rather than a smooth column. In addition, its worktable is a little bit larger at around 7-5/8 inches square. And its spindle travels a little bit farther for up to 2-1/2 inches.

Now, in terms of similarities to the WEN 4208, the WEN 4210’s cast iron worktable bevels for up to 45 degrees either right or left. Aside from that, it comes with five speeds from 570 to 3050 RPM and a 1/3 HP single phase motor. To change the speed, you’re required to move the belts on the pulleys inside its head.

Read More:  What Size is a Number 7 Drill Bit?

However, if you go back to the features that set the WEN 4210 apart from the 4208, you’ll find that 4210 comes standard with a work light and an accuracy-enhancing laser. The laser practically marks the spot with an X to aid you get the hole in the right spots each time you operate WEN 4210.

Overall, if you find that the capacity of 4210 is not that sufficient for your tasks and work, you can check out the WEN 4212 drill press just below.

The WEN 4212 10-Inch Variable Speed Drill Press has more power and a slightly higher capacity compared to the WEN 4208 or the 4210 drill presses. First, 4212 comes with a 2/3 HP motor that lets it drill larger holes in tough materials although it still has a ½ inch chuck just like the other two power tools.

Another bonus point of the WEN 4212 is that it doesn’t just offer five varied speeds, as it also has infinitely variable speed between 530-3100 RPM. The transmission keeps the speed stable while the LED readout verifies it. And you will not have to adjust its belts to change its operational speed manually. All you’re required to do is to rotate the lever.

WEN 4212’s stroke or spindle travel is 2-3/8 inches, a little bit more than on the 4210. While the swing or throat is still ten inches, the cast iron worktable is much larger, measuring 8 by 7-2/3 inches. And similar to the WEN 4210, 4212’s worktable has rack and pinion height adjustment. In addition, it bevels up to 45 degrees.

Furthermore, the 4212 is also incorporated with a laser for precise drilling every time. The laser marks an X on the material with red light accuracy. But oddly enough, there’s actually no work light like you’ll find on WEN 4214 and the WEN 4210. 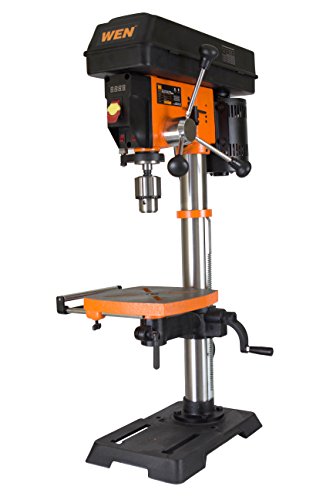 The WEN 4214 12-Inch Variable Speed Drill Press has the largest capacity in this review. The 42124 comes with a larger chuck, longer stroke, a wider throat, and a bigger worktable compared to any other WEN drill presses we mentioned above.

To begin with, the WEN 4214 comes with a 12-inch swing thus letting it to drill through the center of a 12-inch diameter disc, or 6 inches from the edge of a particular material. 4214 also has 3-1/8 inch store or depth that its spindle can travel vertically. Additionally, its 5/8 inch chuck lets you use larger bits compared to the ½ inch chucks on the other drill presses.

In addition, its 2/3 HP motor supports infinitely variable speeds between 580 RPM to 3200 RPM, thus giving you more flexibility. Also, you will not need to adjust its belts just to make a change manually. Simply turn the lever and watch the LED display in order to see the speed.

Like the other cast iron worktables on the other drill presses mentioned above, you can bevel WEN 4214 left or right for up to 45 degrees. But this table is much larger, that only measures 9-1/2 inches square. Aside from that, 4214 comes with a rack and pinion height adjustment. Additionally, it also comes with a table roller extension that expands its capacity for up to 17 inches.

And lastly, 4214 comes with both a work light and an accurate laser. These two features help you get the work done much faster and more effectively with precision. 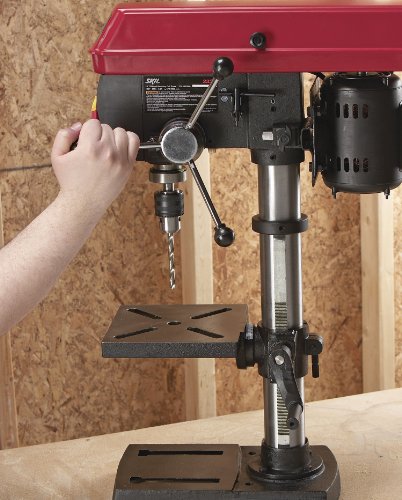 You’re probably now wondering why we did include the SKIL 3320-01 3.2 Amp 10-Inch Drill Press with the four other drill press from WEN. Well, this drill press from SKIL is included here since you can see how the two brands measure up against one another. The SKIL drill press also comes with a longer warranty, but in many points, it’s very similar to the WEN 4212.

First, the SKIL 3320-01 comes with a half-inch chuck for compatibility with most typical bits. Its motor offers five varied speeds ranging from 570 RPM to 3050 RPM. However, you must need to manually adjust the belts on their pulleys in order to set each speed.

At work, you will have the advantage of an X2 laser to mark the accurate spot where the bit will drill. And you can lower and raise the worktable with the help of the rack and pinion system.

Furthermore, its ten-inch swing allows you to reach five inches from the edge of the material you want to drill. Also, you can bevel the cast iron worktable for up to 45 degrees left or right. However, the spindle travel is a mystery as SKIL doesn’t include that information in their specifications.

And lastly, why you should pick the SKIL drill press over one of the models from WEN we discussed above? If you want to know the answer, you can jump down to the recommendation section below in order to find out if it’s really worth the investment.

If you’re looking for a basic drill press for small tasks or projects, then you can try the WEN 4208 as it comes with an 8 inch throat and a half-inch chuck. In addition, it comes with enough power to drill a half-inch hole in a cast iron. However, 4208 also comes with two cons. The first one is that you have to adjust the speed manually by moving the belts on their respective pulleys. And lastly, 4208 is the only drill press in this review that doesn’t come with a rack and pinion adjustment for the heights of the worktable.

The next one is the WEN 4210 which comes with a ten-inch swing, a larger worktable, and a longer stroke. Though it comes with five speeds, you still need to move the belts each time you want to make a certain change. This extra step might not bother you if you primarily drill in the same type of material. Additionally, this drill press is incorporated with two extras: a laser and a work light. These particular features combined make the WEN 4210 the best value for the price if ever you don’t need a larger capacity drill press.

The next one is the SKIL 3320. The SKIL is incorporated with a slightly larger worktable and a much longer warranty. However, its 5 manually-selectable speeds need you to move the belts on their respective pulleys just like on the WEN 4208 and 4210.  But the good this is, it also comes with a laser, although it doesn’t come with a work light.

Now, moving up in capacity, you will find the WEN 4212 with its precision laser. 4212 comes with infinite speeds between 530 and 3100 RPM, and you don’t need to move any belts to pick them. Simply rotate the lever and watch the LED readout. In addition, the WEN 4212 also comes with a more powerful motor, a larger worktable, and deeper stroke, though it only has a 10 inch throat.

And lastly, the WEN 4214 comes with the largest capacity of any of the drill presses featured in this review. It is finely suited to larger projects due to its infinitely variable speeds between 580 and 3200 RPM, a longer stroke, a 5/8 inch chuck, and a twelve-inch swing. 4214 also comes with a table extension that expands for up to seventeen inches. Additionally, it comes standard with both a laser and work light. If you’re assigned to a variety of drilling projects in a vast range of materials, then the WEN 4214 could be the ideal investment for you.