Well, let’s take a look at the following four DeWalt driver kits so you’d be able to pick the best impact driver for your needs and profession. 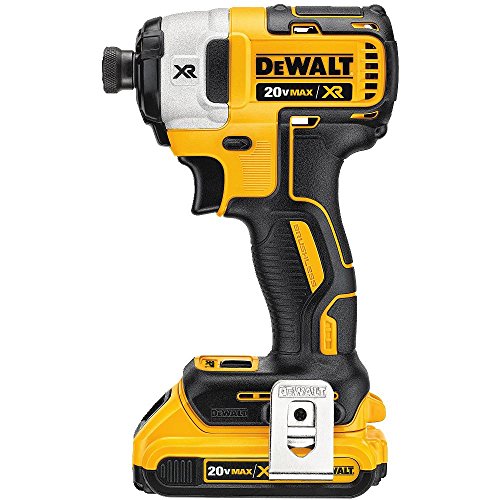 If you’re a professional employee, you mustn’t settle for just a brushed motor.

All of the impact drivers reviewed in this roundup are brushless motors. This kind of motor is the perfect pick if you’re looking for a unit that has the efficiency, power, and durability. Additionally, impact drivers with brushless motors tend to operate with minimal noise, run cooler, don’t need heavy maintenance, and can get more done on a single battery charge.

Now, let’s take a look at the DEWALT DCF887 impact driver that’s featured in this kit and the next driver below. DCF887 only weighs just around 2.65 lbs. without its battery, and it only measures 5.3 inches from front to back. That dimension is a little bit shorter compared to the barrel on DeWalt’s DCF886. Obviously, you can see that DCF887 is a lot smaller and lighter compared to a typical drill. However, the size won’t dictate its power.

Furthermore, its brushless motor can put out an incredibly 1825 inch-pounds of torque at speeds up to 3250 RPM with 3600 impacts per minute. In addition, DCF887 comes with a 3-speed transmission and a variable speed trigger for accurate work. In fact, if you’re seeking for a serious accurate work, you must put it in its first gear which is 0-1000 RPM and take it slow with torque up to 240 inches per pounds.

Moreover, the chuck on this impact driver is a ¼ inch hex chuck so you can only use bits that come with hex shanks. On the other hand, changing bits is really easy. Simply slide back its sleeve, pop in the bit, and you’re good to go. You can do this with just one hand. In addition, keep in mind that this impact driver will accept bits as short as 1 inch long.

Around its chuck are three LED lights. This feature get rids of shadows where you’re working much better compared to the earlier models that come with LED. DCF887’s LED operates on a 20-second shutoff delay. They also run on the same battery pack as the impact driver does.

And lastly, the batteries included in this power kit come with a 2.0Ah capacity. That doesn’t imply that they will run for two hours straight. In case you didn’t already know, 1 Ah means a device using one ampere of current can operate for an hour, of course under perfect conditions.

Now, if your impact driver needs more than one amp of current, it would run for less time. In addition, doubling the amp-hours, or capacity of the battery pack doesn’t imply that it will run for twice as long, but it will have about a 30% improvement. 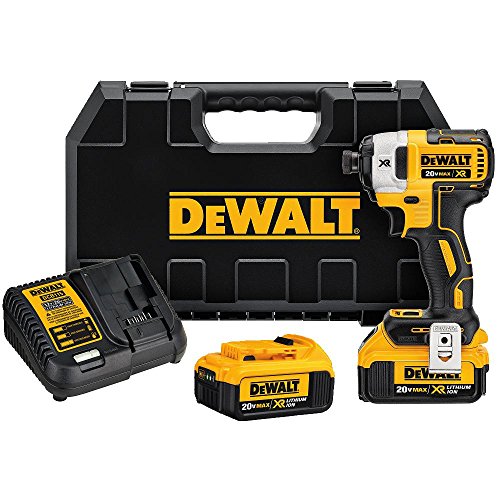 Now, let’s move on to the DEWALT DCF887M2 kit. This kit comes with the same DCF887D2 impact driver we just mentioned above. In addition, it also comes with two larger capacity battery packs.

So what’s the difference between the two?

It is the batteries that put the “M2” in the name of this kit. These batteries are 4.0Ah capacity li-ion battery packs that are part of DeWalt’s 20V MAX XR line-up. They’re double the capacity of the batteries in the 887D2 Kit. They are one of the highest capacity batteries on the market as of the moment. However they’ve been surpassed by 5.0 Ah packs.

Each 1.0 Ah increased in capacity doesn’t really bring a full hour of operating time, however it does raise it by about 30%. The only pro of this kit over the one above is that its inclusion of higher-capacity batteries.

If ever you haven’t yet used a power tool that is equipped with li-ion battery, then you can try it. Its batteries are much smaller and lighter. They also last longer on a single charge so you can get more tasks done.

But aside from that, they don’t come with memory effect, so you can charge them as often as you want, and it will not lessen their capacity. DCF887M2 also runs well even in freezing conditions, on the other hand, it’s not really suitable for too much heat. In fact, the DeWalt charger will not even start the charge cycle until the batteries cool down enough.

The DEWALT DCF895D2 20V Max XR Lithium Ion Brushless 3-Speed 1/4-Inch Impact Driver is also a very efficient and powerful impact driver. But why would you prefer this over the previously mentioned DCF887 above?

Well, it only weighs a few ounces less and is a little bit smaller. If you need to drive fasteners in tight places or overhead, then this one may be just what you need. To be specific, it only weighs around 2.2 lbs. without its battery. In addition, it only weighs 5-1/4 inches from front to back.

Furthermore, its optimal torque is 1500 inches per pounds, which is a bit less compared to the DCF887. It is also a bit less speedy. Its 3 speed transmission comes with three gears, which are low at 0-950 RPM, medium at 0-1900 RPM, and high at 2850 RPM. The impacts per minute that accompany these three speeds are 1,300, 2400, and 3000. Thus, the trade-off for a smaller size would be a bit less speed and power. However, that doesn’t mean that this impact driver won’t be able to handle huge tasks. Of course it’s a professional power tool after all.

Similar to the DCF887, the DCF895 impact driver is equipped with a brushless motor. That gives it more than half again the runtime of an impact driver with a brushed motor. In addition, it can last for years under normal usage. It is also much quieter and operates cooler.

As an impact driver, it doesn’t come with a clutch like a drill press does. Its chuck accepts ¼ inch hex bits and they’re easy to swap with just one hand. Again, simply pull back your sleeve, pop in the bit, and you’re good to go.

Moreover, around its collar are 3 LED work lights. They turn on when you press the trigger, then turn off after 20 seconds. Because there are 3 lights, they don’t cast shadows on your work area like the old 1-LED design did.

And lastly, the driver runs on the included 20V MAX XR li-ion battery packs. These batteries come with an integrated fuel gauge so you’d be able to monitor how much charge is left.

And lastly, we’ve come to the final impact driver we’ll discuss, the DCF895M2 kit. The only difference between the DCF895DT kit and DCF895M2 kit is that DCF895M2 comes with two 4.0Ah capacity battery packs. That rating makes it look like they’ve double the capacity, but the fact is that it is only about 30% more.

That’s actually still a good deal for someone who uses their impact driver regularly. More battery capacity implies more runtime between charges. Additionally, the 4.0 Ah capacity batteries are compatible with the whole range of DeWalt’s 20V MAX XR power tools, thus you can use them with your drill press and more.

But aside from that, this kit comes with the DCF895 impact driver. It is a little bit lighter and smaller compared to the DCF887 driver we tackled first, and quite less powerful. If you’re looking for the smallest driver with the largest capacity batteries, then this is the perfect kit for your needs.

If you’re looking for an optimal runtime and power, then you’ll want to resort to the DeWalt’s impact drivers in these two kits. The first is the DCF887M2 kit that comes with 4.0Ah battery packs. Now, if you don’t mind the smaller capacity batteries, yet still want to get the most power, then you can get the DCF887D2 kit.

On the other hand, if lighter and smaller is better for you, get the DCF894D2 kit as it comes with 2.0Ah batteries.

And lastly, if you want to combine lightweight and small-size with long-lasting batteries, then you might want to consider the DCF895M2 kit.