If you are looking for the right tools with adequate power to help you with simple household tasks, consider the Dewalt DCK286D2. This combo is compact, easy to use, and is recommended for those who are just starting out. 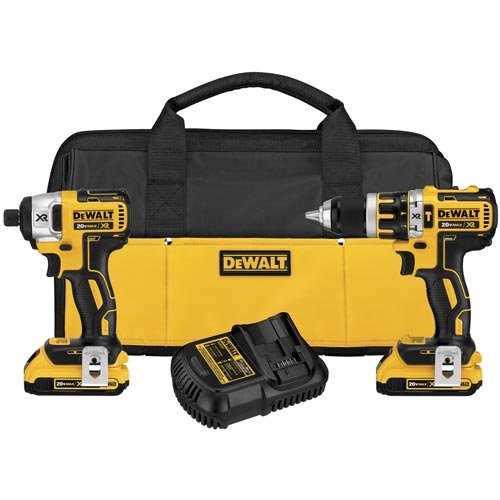 The Dewalt DCK286D2 combo is specially made to ease its user’s workload. Both tools were intelligently designed to be compact and lightweight at only 3.6 lbs., which makes it easier to handle compared to its heavy-duty counterparts. This will not cause little to no strain when working on small household projects.

Users who purchased the product are satisfied to know that it comes with a contractor bag. All your tools and accessories can be placed inside, and there will be no problem carrying it from one place to another.

Another feature of the DCK286D2 that adds to its ease of use is its soft grip handle and a two-finger trigger for increased comfort and control. When the tool encounters resistance, the user is given maximum control to work on it slowly and use minimal force. This is a complete tool for everyone as it requires less effort but still delivers quality work.

The hammer drill boasts of high-speed transmission and a two-speed setting which is good for high-speed masonry drilling of up to 2,000 RPM. However, its impact screwdriver is compact and conveniently easy to use in tight spaces. It has 14 clutch settings, allowing you to optimize its operation according to the specific needs of the project.

You can also work anywhere and anytime. Both tools have a built-in LED light that aids you in dark or poorly lit work locations. These lights feature a 20-second trigger release delay which not only illuminates your line of sight but also eases productivity in confined spaces.

One of the main complaints users have of this product is its 2.0 mAh battery. While the tool itself delivers great speed and power, other users initially observed that the tool needs a larger battery to keep up with its functions.

However, charging only takes 45 minutes even after heavy use. A full battery lasts for hours of continuous work and can hold a charge for months when used occasionally.

However, in spite of having two perfectly working batteries, having on hand for both tools is also a wise decision. First, it will avoid battery swapping and, second, it will also increase productivity as you will not need to stop working during charging times.

The DCK286D2 combo has undeniable speed. However, the DCD995 hammer drill has been found on numerous occasions to work below expectations. Regardless, it has ample power when used within its limits. You can use it for your daily projects while adding the capacity of drilling through concrete.

To justify its low power, you have to take into consideration the fact that the tool only weighs 3.6 lbs. With these specifications in mind, one can say that this drill has enough power to get things done. If more power is required, then you may want to get heavier tools for the job.

Dewalt offers a three-year limited warranty on this product. Make sure to keep your proof of purchase as you will need it to avail the coverage. In addition to the warranty, the company also offers to maintain the tool and replace worn parts caused by normal use with its one-year free service contract.

Make sure to use the tools thoroughly as soon as you get them, checking if all parts and functions work as they should. If you are not satisfied with their performance, the company also promises a 90-day money back guarantee that entitles customers a full refund. Keep in mind that this set of warranties does not cover any damage from misuse, abuse, or unauthorized repairs.

The Dewalt DCK296M2 includes a DCD995 hammer drill that features a three-speed transmission which outshadows the DCK286D2’s DCD795’s two speeds. It is also notably cheaper. It has similar inclusions as the DCK286D2 such as the DCF886 impact screwdriver, however, the only significant difference of the two lies in its hammer drill.

However, keep in mind that not all tasks require using the heavy guns. More often than not, what we need is something handy and easy to use for our simple household projects. Too much power can cause more harm than good especially in the face of light and delicate tasks. Therefore, it is a wise decision to have a tool that matches the jobs you frequently need to use it on.

Indeed, the Dewalt DCK286D2 combines all you need in one combo kit: power, speed, size, and efficiency. It may be considered less powerful than its bigger counterparts, but what it lacks in power, it makes up for in functionality. It works admirably within a wider range of work limits, and you’ll be sure to accomplish more of your tasks in the long run.