Creating frames for a house requires circular saws that can make precise, quality cuts consistently at a fast pace.

This means contractors will reach out for a circular saw that gives them the performance, precision, and the size and depth-of-cut they need to make the outlines of homes possible.

Both Makita and Bosch designed the tools we’re reviewing in this article for framing tasks in mind.

The circular saws we’ll be looking at today both can cut through 2-inch thick materials but will do so using different speeds and footprints.

Makita engineered the 5007F after listening to its users who want more durability, more user-friendly features like dust control, and more power out of a circular saw.

It appears to be of the same generation and make as the Makita 5007MG, another great circular saw in the Makita product line.

Bosch’s German engineering rings true in the Bosch Bare-Tool CCS180B as it not only tough, the tool also cuts projects with precision while making the work easier and safer.

We’ll review these tools based on their power, precision, maneuverability, and user-friendless and see which of them comes out on top.

Both of the circular saws on display today target contractors who need a saw tool for framing jobs and for work that requires a lot of good and consistent cuts that you’ll find in flooring, roofing, and siding work.

The Makita 5007F vs Bosch Bare-Tool CCS180B will deliver the goods but using different qualities.

The Makita 5007F is big and beefy because it packs a lot of power under the hood. It will rev up to 5,800 RPMs and will take on large projects quickly as it can make big and deep cuts in unison with the speed of the motor.

What the Bosch Bare-Tool CCS180B lacks in power and size, it makes up for in convenience since it works on lithium-ion batteries, giving users the freedom corded-electric saws can’t. 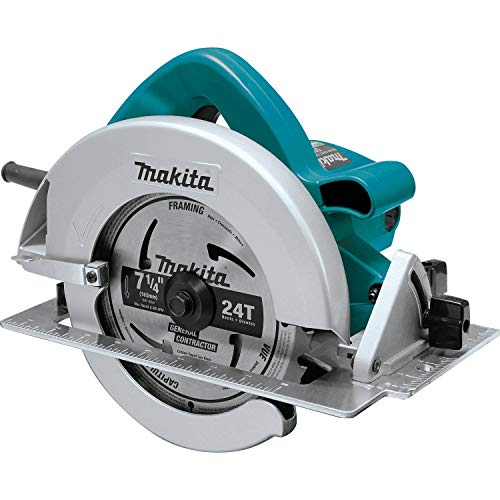 The Makita 5007F sports a ball bearing construction to make the motor last longer against wear.

Aside from the tough casing, Makita also crafted the base using heavy gauge aluminum while also engineering it for accurate and precise cuts.

This circular saw packs quite a bite at 5,800 RPMs and performance testing shows it can easily cut through 2-inch thick materials in a matter of seconds.

Changing saw blades is a cinch thanks to the flat housing for the motor for better stability in case you need to change to a saw blade with more teeth. Users can also find the shaft lock to change the blades, making the process less fussy.

The measurements in the circular saw’s base can be very hard to read.

Users can just use a green marker or a green crayon to get the measurement numbers and lines to pop out. 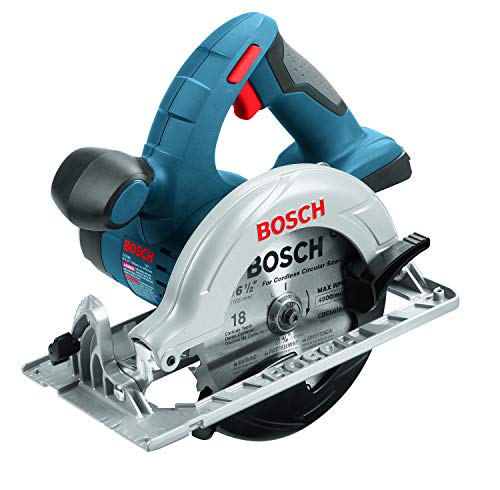 Although Bosch did not make the CCS180B out of Nickel-Cadmium like its legacy tools, it’s casing is made of high-strength aluminum alloy.

It can take the beatdown contractors will put on it while working on the construction site.

Compared to other circular saws, the Bosch CCS180B runs a decent 3,900 RPMs but don’t let that modest number fool you.

The tool itself can cut through 2 inches of wood or metal at its standard level 90 degrees and 1and 9/16th of an inch if you angle it for 45-degree cuts.

The Bosch CCS180B weighs only around 6.6 lbs without the batteries. Although its lightness appears to be a tradeoff for higher motor power, it’s a sacrifice that enables the circular saw to use a smaller frame that helps it get into tighter spaces that bigger, blockier saws cannot.

Aside from the base measurements and the bevel guide, users can also manipulate the saw according to depth through the guide at the back.

Users can go up to 2 ⅛ inches deep for better material penetration.

There is no dust removal on this tool so sawdust may accumulate on your work surface.

Users will just have to wear goggles and a gas mask to protect themselves while using the circular saw.

After gathering our thoughts on which of the two tools is better, we’ve decided to pick the Bosch Bare-Tool CCS180B over the Makita 5007F for convenience, user-friendliness, value for money and the set of safety features it brings to the table.

The Bosch Bare-Tool CCS180B light weight and small footprint give it unparalleled maneuverability on project surfaces.

It’s also these qualities that make it accessible for underserved woodworkers like women contractors or elderly craftsmen who need lighter and smaller tools in order to make frames, floors, and roofs.

Bosch also engineered the CCS180B to be safer than most circular saws in the market.

The snag-proof lower guard prevents hiccups while woodworkers set the circular saw down on the work surface and the electric brake immediately halts the saw once the user brings it up from cutting.

The Bosch Bare-Tool CCS180B costs a few dollars more than the Makita 5007F but the former’s robust set of features makes the extra-expense worth the investment.

All in all, both tools will make quick work of framing jobs in the job site and will survive the demands professionals will make out of them.

It just depends on whether you want more power out of a tool or more user-friendly features. The Makita 5007F will satisfy contractors who want more RPMs than they could handle out of a machine.

On the other hand, the Bosch Bare-Tool CCS180B will give freedom, mobility, and ease-of-use to users who want power tools with a lighter touch.

Look at your own requirements and buy the circular saw that’ll fit your work style best.