Sanders provide woodworking professionals with invaluable support by helping these craftsmen provide their projects with the necessary polish that completes a finished product. These power tools also allow renovators to quickly strip paint off wooden walls or surfaces.

All sanders smooth rough wooden textures through the power of a motor that automates abrasion. The tools come with detachable sandpaper attachments that abrade the surfaces that need finishing.

Without a sander, finishing or removing paint coating a project will take a long time from a woodworker or carpenter – time they can use to work on other furniture or construction.

There are different types of sanders depending on size, head shape, mechanism, and whether it’s handheld or workbench mounted. What we’ll be setting our eyes on in this article are belt sanders. They’re units that utilize belts between two wheels that go around continuously.

We have a lot of expectations on both the WEN 6321 and the CRAFTSMAN CMEW213 belt sanders since they come from power tool companies with more than 50 years of operation. Let’s get into these sanders now.

What is the Difference Between WEN 6321 and CRAFTSMAN CMEW213 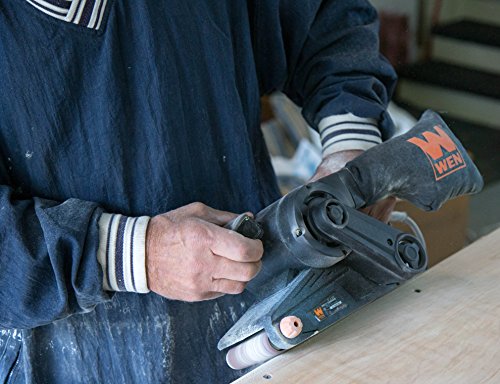 WEN 6321: At around 3 by 4 1/2 inches, this sander’s contact plate comes at a smaller scale than you would find in other pricier models.

The WEN 6321 works using the power of a 7-am motor that allows the belt to circle at 13 feet per second. Although this model’s power output lags behind other competing products, this sander rotates the belt around 820 feet per minute. It’s a good solid fixed-speed sander for your regular sanding jobs.

When set to the workpiece, the WEN 6321, performs according to specifications with a little slowdown from time to time. It may bog down a bit but it will give you a good pace on your work regardless. 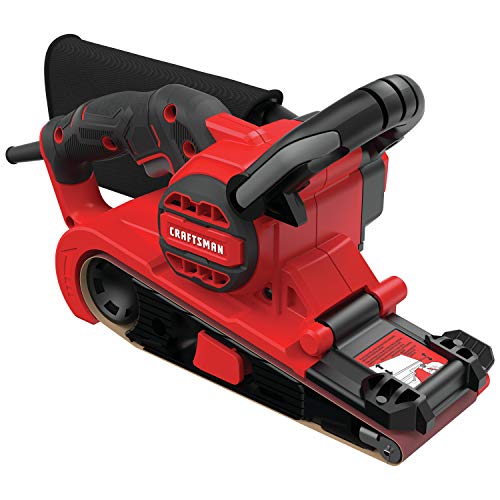 CRAFTSMAN CMEW213: The CRAFTSMAN CMEW213, like the WEN 6321, operates around the 800 feet per second range. The unit’s angled belt design allows the sander to work smoothly over two adjacent surfaces.

This CRAFTSMAN model’s 7-amp motor works in the speed its manufacturer advertised. It performs well for quick and dirty or light sanding jobs. Unfortunately, you’ll need to take breaks if you’re going to take on bigger projects with this 3×21 inch sander since it overheats easily after the 15-minute mark.

Both sanders clock in at almost the same sanding speed but the WEN 6321 outpaces the CRAFTSMAN CMEW213 in terms of running time. Although the WEN 6321 requires a little more pressure on the work surface because of its lighter weight, this doesn’t diminish its performance which remains comparable to its rival at this point.

WEN 6321: Woodworkers demand cleaner work from their sanders so dust collection has become an important feature to look at with these products.

The WEN 6321’s impeller performs a decent job at collecting dust and sending it into the dust bag. After doing some work on the wood piece, we checked the amounts of wood dust in the bag versus the ones we saw lying around. This sander collects 75% of the dust it generates versus 25% of the ones scattered outside.

CRAFTSMAN CMEW213: After field-testing the CMEW213 sander, we found that its dust collection falls in the mid-range. After making a sight evaluation of the workspace, we see that this CRAFTSMAN belt sander leaves out around 50% of the wood dust it generates. The blame falls on the model’s small dust bag.

The WEN 6321 will keep the work area a lot cleaner than the CRAFTSMAN CMEW213 could. If dust collection is a consideration for you to buy a portable belt sander, you should go for the WEN model. 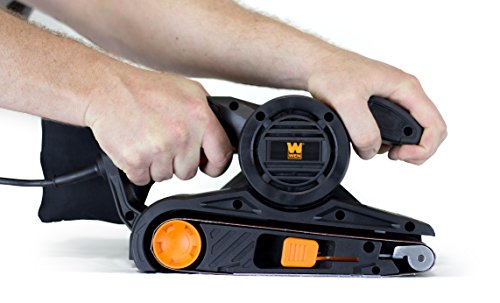 WEN 6321: The WEN 6321 possesses a beefy D-grip you can use to obtain a solid handle while sanding. What’s great about the grip is it allows you to move your hand around any position your hand would be comfortable in. You’ll have more flexibility in terms of getting a bead on moving the sander as you work the wood.

What makes the WEN 6321 so easy to use is it’s relatively light weight. The sander itself weighs only 6 pounds and thus lends itself to its users easily.

CRAFTSMAN CMEW213: The CRAFTSMAN CMEW213 also comes with an ergonomic grip that allows users to jostle around for a more comfortable hand position when sanding. Aside from this, this model also features a tool-less belt release lever that enables easy sanding belt removal and replacement.

Unfortunately, the CRAFTSMAN CMEW213 can be challenging to carry because it weighs around 7.7 pounds – that’s almost 2 pounds heavier than the WEN 6321.

The CRAFTSMAN CMEW213’s compliance with existing design standards allows the user greater freedom in choosing attachments they’ll complement it with. It’s also outfitted with the same easy sanding belt release system and ergonomic handle as its competitor. It’s weight, though, can hinder ease of use and may deter users who want more portability from buying it.

WEN 6321: The WEN 6321’s unique form factor, rectangular with curved edges, limits the kinds of attachments you can plug to the product. For example, you’ll find it challenging to find a shop vac adapter for this model so you might have to customize one for yourself. 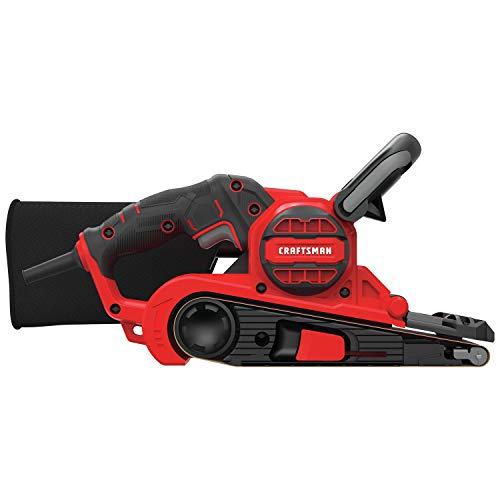 CRAFTSMAN CMEW213: The CRAFTSMAN CMEW213’s form factor does not deviate from the standard when it comes to build and form factor. Its manufacturer encased the sander in a heavy plastic casing; this presents itself as an issue when the unit overheats as certain parts of the casing may melt when it reaches high temperatures.

What’s good about the model is you can relatively plug in any third-party attachment to the sander with no problem. It will work well with off-brand sanding belts as well. The product also plays well with VERSATRACK Wall Organization Systems in case you’ve got one set up in your workshop.

WEN 6321: Granted, there are things we wished the WEN 6321 performed better but its pricing allows it to be competitive against other budget sanders. It already performs very well against sanders from no-name brands and it’s already cheaper by around 25% to 35% than sanders operating within the same price range.

The WEN 6321 is so cost-effective, you can easily just buy a spare instead of shelling money for replacement parts when something breaks.

CRAFTSMAN CMEW213: The CRAFTSMAN CMEW213 places itself at a mid-range price point. The unit itself performs according to this market value and thus ties its middling performance measure for measure to a mid-level price range. It makes you feel you’re getting exactly what you’ve paid for – no more, no less.

You’ll get the worth of every dollar you sink in a WEN 6321. The product performs well beyond its price point and offers you good features and stability as add-ons.

Read More:  Is Makita a Good Brand & Why are Makita Tools so Expensive?

WEN 6321: Aside from the hardware’s features like easy belt release, easy-to-handle grip, the ergonomic handle, the sander comes in with WEN’s 2-year warranty for the product and its solid after-sales support.

CRAFTSMAN CMEW213: You’ll get a 3-year warranty for parts and replacement when you buy this product. You could consider the extra year warranty coverage a plus if you intend to use this product heavily.

If you’re going for a lengthy warranty support period, you should go for the CRAFTSMAN CMEW213. Although the warranty period is slightly shorter, you can overlook the short 2-year coverage since the WEN 6321’s price is well below the average market price for portable sanders.

Both portable sanders operate at the same speed and almost have the same specs on paper. If you’re considering on buying either of the two, your money is better spent on the WEN 6321 despite performing on the same fixed-speed range as the CRAFTSMAN CMEW 213.

You need to consider pricing and weight as the bonuses that allowed the WEN 6321 to edge past its rival in the portable sander category. First and foremost, the WEN 6321 operates in a lower price range than its competitor while offering the same sanding efficiency. Second, it’s weight allows the more casual home users, like women who want to do some remodeling, to handily wield it.

The WEN 6321 is simply a great buy for its suggested retail price and blows both low-end and mid-range 3×12 sanders out of the workshop.